In Europe the pistol is sold as Striker Fired Pistol (SFP). In the USA, on the other hand, it is sold as the Volkspistole VP9. Heckler & Koch is expanding the SFP9 SD series, which was first launched 5 years ago, with beautiful regularity: the SFP9 SD differs from the basic model in the fully adjustable rear sight, the long polygonal barrel with muzzle thread for suppressors (where allowed by law) and, in this specific case, the frame in the RAL 8000 yellow-brown camouflage. all4shooters.com has tested the special version of the HK SFP9.

The SFP9 usually comes completely in matte black, albeit in assorted sizes. In addition to the standard model with a 15-round magazine, a longer version with a skeletonized slide for sport shooters is also available, while the compact SFP9 SK with a 10-round magazine is recommended for concealed carry. For the sub-compact version of the Striker Fired Pistol from Oberndorf, larger 13- and 15-round magazines are of course available, as well as various magazine floor plates with finger rest or magazine covers to extend the grip area. 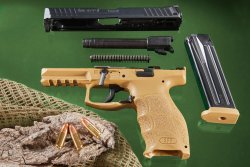 Marcus Heilscher
The suppressor-ready version of the SFP9 is produced by HK not only in RAL 8000, but also completely in black. In addition to the longer polygonal barrel, the manufacturer also provided the model with a micrometer rear sight adjustable in elevation and windage.

Technically, the SFP9 inherited many details of the Heckler & Koch P30 – except for the now hammerless system – which in turn was the most modern series of the Universal Self Loading Pistol USP from the 1990s, introduced in the German Armed Forces as the P8. There are, for example, the magazine and the textured grip with finger grooves. It can be excellently adapted to the shooter's hand both by different backstraps and grip shells in several thicknesses. All controls can be found on both sides of the frame, as usual only with the exception of the disassembly lever. Speaking of disassembly: in case of simple field stripping by operating the disassembly lever, you'll have only 4 components and you don't have to pull the trigger. If you don't like the ergonomically and safety-wise well engineered, but unconventional "paddle" magazine release in the trigger guard, you can also get the gun with the internationally popular push button. The usual safety system with a medium trigger travel does not require a manual safety, but the SFP9 can also be manufactured with a safety lever on both sides. 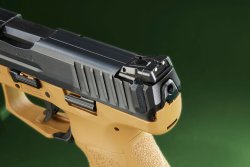 The best accuracy among the ammo types used was achieved by the Sellier & Bellot semi-jacketed cartridges with a 51 mm (-9 points) group, shooting with the gun supported. Malfunctions or misfires were unknown to the test gun – not even with the Sellier & Bellot soft point cartridges or with hollow point ammo (-0 P.). The trigger broke at 84.65 oz / 2400 g and was relatively crisp. Coupled with the wide and only slightly curved blade, HK strikes a practical balance between shooting comfort and operating safety. The medium-length trigger reset can't be criticized for a service or defense gun; on the contrary, ultrashort resets are considered an unpopular feature in some government or military tenders. The second stage trigger travel may be somewhat longer than absolutely necessary (-1 P.), but overall the Oberndorf-based manufacturer offers an excellent combat trigger for the SFP9, either with a pull weight of more than 70.5 oz / 2 kg (Special Forces), or more than 105.8 oz / 3 kg according to the technical guideline of the German police, depending on the version. The grip design currently represents the yardstick for what can be achieved with a polymer pistol in terms of ergonomics and individual adaptability (-0 P.): more options are only offered by models in which the entire plastic grip can be changed as a module. 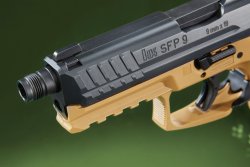 Marcus Heilscher
The factory sights of the SD does not differ significantly in height from the normal SFP9 sights.

The front sight and the light bars of the SFP9 SD appear a bit finer than today's combat pistols, but the iron sights offer full adjustability in elevation and windage, a high-contrast siight picture and luminescent night dots (-0 P.). The play between slide and frame was audible when shaking (-1 P.).

But overall the plastic and steel workmanship of the SD model was exemplary both inside and out.

More information about the SFP9 SD gun can be found on the Heckler & Koch website.

Subscribe to the Newsletter
This article is also available in this language:
DEIT
Click here for more information on the topics:
Heckler & Koch (HK)9 mm9x19 mm (9 Luger)PistolsSemiautomatic pistolsTest
That might interest you too: