With the P320 X-Five, SIG Sauer offers a match version of its now well-known P320 pistol. We tested the X-Five versions of this gun, which serves the US Army as the M17 and M18. You can read the report here on all4shooters.com.

A contribution from all4shooters.com / Alexander Orel and Matthias S. Recktenwald06/18/2019 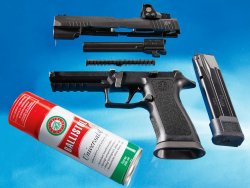 Marcus Heilscher
The slide is designed so that it either has a fully adjustable rear sight or a reflex sight. Below the barrel, the telescopic preloaded spring, frame and magazine. Note the sports trigger.

Hardly any other pistol model has recently had such a successful career as the SIG Sauer P320. At the end of the US tender for the new Army handgun model in 2017, the P320 emerged as the winner with the corresponding test model called XM17 and has since been in service in the US Army as the M17. The compact version of the P320 followed suit with the military designation M18. All in all, no small thing: the order volume reaches 492,000 pistols, to be procured in a period of one decade. With this model, SIG Sauer introduced a polymer pistol that features a striker-fired action - common for this type of guns as well as the modified Browning-Petter-SIG system, consisting of a barrel locked breech and an open bottom barrel cam. Distinctive to this model was also the modular design: the trigger unit is housed in a steel chassis, which in turn is mounted in the polymer frame. SIG Sauer introduced this design for the first time in the 250 DCc model. And because the awareness level on the P320 has increased abruptly, all conceivable versions of it are now available. This includes length, calibers (besides 9 mm Luger,.45 ACP, .40 S&W, as well as - in the USA - .357 SIG) and equipment with a reflex sight of the in-house Romeo1 type. Last but not least, there is the X-Five series, which is designed for sports use.

Like the "X-Five" pistols in the P226 series, the P320 X-Five also has a 5-inch / 126 mm barrel, a magazine funnel and adjustable sights (this is the version that we test-fired, unlike the Romeo1-equipped version shown). Technically speaking, the X-Five version of the P320 is based on the standard version. The slide is nitrocarburized and differs from the original P320 one for three highly visible ports at the top. The purpose is to save weight and reduce barrel heating.

The match version of the P320 under test

The gun we test-fired featured iron sights (not the Romeo1 sight shown in the photos): the test pistol had a Dawson Precision front sight as well as a windage and height adjustable steel rear sight. Since both offered a great target picture, there were no losses here – the judgement with the Romeo1 sight would not have been any different (-0 points). The same is true for cycling: the gun did what it had to do without any interference (-0 P.). And again the same for controls: easy to reach, left and right slide stop lever, reversible magazine release (-0 P.). However, the testers criticized that the trigger, which although still breaking at a bearable value, crept a little and had a slight overtravel (-2 P.); overall, however, this is a trigger aimed at dynamic sports. About the trigger lever, two out of three testers found the design flawless, while the third found the part far too smooth (-1 p.). Tactile slide play and slight machining traces led to further point losses (-2 P.), the coated 21-shot steel magazines were greatly appreciated. During the firing test the gun behaved as expected. Its best result was a 61 mm grouping, achieved with the heaviest test load (-11 P.).

Summing up, the following can be said: with details such as jet funnel, straight trigger and slide ports, the P320 is consistently intended for sporty dynamic uses, all this with a neat design and workmanship. The test pistol came in a lockable plastic case with spare magazine, operating manual (English only), target and various stickers and two spare fiber optic inserts.

Further information about the SIG Sauer P320 X-Five can be found on the manufacturer's website.

Subscribe to the Newsletter
This article is also available in this language:
DEIT
Click here for more information on the topics:
SIG SauerPistols9 mm9x19 mm (9 Luger)TestSemiautomatic pistols
That might interest you too: