Testing an unusual “pistol”: the Heckler & Koch SP5K at the shooting range

Whether it is a handgun or not, is a matter of dispute. However, in some countries the law classifies the Heckler & Koch SP5K as such because of its length. For this reason all4shooters.com included this unusual gun in the 9 mm pistol test series. Discover here what the civilian derivative of the MP5K is capable of.

A contribution from Hamza Malalla and Matthias S. Recktenwald / all4shooters.com08/27/2019

Who can buy the Heckler & Koch SP5K? It depends on the country you live in: for example, in some European countries collectors are allowed to buy it as a handgun, while in most of the EU sports shooters unfortunately can't. Too bad, because the SP5K, the semi-automatic civilian variant of the MP5K submachine gun by Heckler & Koch, shoots great, at least with the folding stock which is available as an accessory. 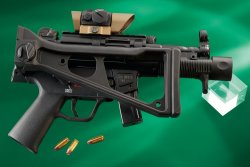 The folding stock only locks in the open position. When folded against the receiver, just the spring pressure holds it in place. Optic, Picatinny rail and folding stock are not part of the factory package and are only available for an extra charge.

Technically, with its stamped steel receiver, the roller delayed blowback system and the polymer grip, the gun is based on the more modern MP5K series - here of course as a pure semi-automatic gun with corresponding modifications. Depending on the basic equipment, prices start at 2000 euro, whereby both the folding stock and the Picatinny rail for the stamped receiver would each have to be paid another 200 euro at the time of purchase. 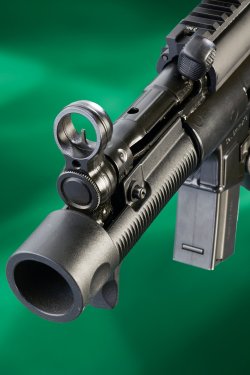 The civilian handguard offers no upgrade options and covers the entire muzzle section of the SP5K.

The civilian handguard made of plastic offers the supporting hand a useful grip. In addition, it covers the muzzle area and a hand stop prevents fingers from accidentally moving in front of the barrel. Most shooters, however, would prefer the classic polymer handguard with the integrated  foregrip, or rather mount a Dural handguard with HKey interfaces, which unfortunately costs 300 euros as an accessory for the SP5K. As for the muzzle: there isn't much under the forend, since the barrel ends flush with the front sight mount. There is neither a thread nor a suppressor attachment. Despite its lightweight construction, the folding stock is reliable and stable. When folded out, the stock locks in place; folded in, it is only held in place against the receiver of the SP5K by spring pressure. Disassembly does not cause any problems, the receiver, grip and the receiver back plate being held together by two locking pins. As usual, the charging handle offers the option of being pulled back into a recess in the receiver to keep the bolt open. Due to the short barrel, the charging handle should be manipulated with care when the rifle is loaded. Both the Oberndorf-based manufacturer itself and some other companies offer various accessories for the SP5K. Any kind of accessories and conversion parts for the Heckler & Koch MP5K often fit, as long as the part has nothing to do with the muzzle or the grip.

How does the civilian version of the MP5K behave on the shooting range?

The SP5K did not disappoint on the shooting range. At a distance of 25 m, the light semi-jacketed cartridges from Sellier & Bellot produced the best result with 17 mm diameter grouping (-0 points), other loads were in the 25-40 mm diameter range. There were no malfunctions (-0 P.) and the empty cases were powerfully ejected  to the right out of the cartridge chamber, which is fluted. The military-style trigger breaks at a heavy 3.7 kg, which would not be a particularly impressive value even for a thoroughbred police or army weapon (-3 P.). The grip area of the handguard was a bit short and unfortunately no accessories can be attached here either, so testers deducted 2 points for the grip design (-2 p.). Unfortunately, HK combines the ergonomic thumb safety on both sides with a magazine release button which is located very far in front only on the right side of the receiver. The SP5K also doesn't have an automatic last round hold open, as is usual for the HK long guns with delayed blowback system - a total of 7 points remain for the controls (-3 P.). The adjustable drum back sight with a total of 4 notches is good for various lighting conditions and rather short to medium ranges, therefore there was no point deduction here (-0 P.). Both steel and plastic look cleanly processed. All the more annoying that there was a clear play between grip and receiver (-2 p.).

At the end of the day, the Heckler & Koch “pistol” earned 90 points and an “excellent” overall test result. We were actually delighted by this highly unusual firearm with its accuracy, flawless operation, technical features and extremely professional look. Being in fact a genuine derivative of the legendary MP5 submachine-gun, it's quite iconic for collectors and shooters alike. Where permitted by law this gun is worth considering - if only for having such a classic in your closet.

More information about the SP5K can be found on the manufacturer’s website.

Subscribe to the Newsletter
This article is also available in this language:
DEIT
Click here for more information on the topics:
Heckler & Koch (HK)9x19 mm (9 Luger)
That might interest you too: