The “mini-P30” under test: even with the smallest version of the P30 family, you don't have to do without the comfort of service models. In principle, the SK is a P30 in which Heckler & Koch shortened both the grip and the slide/barrel assembly by about one inch. Find out here at all4shooters.com what this HK sub-compact polymer pistol can do. 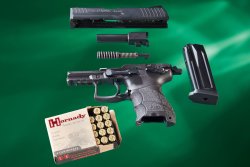 Despite the compact size of the P30SK S, the Picatinny accessory rail is still available, and with the large magazines and contour extension, the SK version is not spectacularly different from a full-grown P30 with a 4” / 104 mm barrel thanks to its similar overall weight. With the factory-supplied short ten-round magazines, the SK loses a third of its ammunition reserve, but it also takes up less space on the belt. HK is currently offering its small 9 Para pistol with an external hammer spur as shown, DA/SA trigger and external safety, or you can choose the variant with CDA trigger. You can usually do without the thumb safety, but the medium-length, medium-heavy trigger pull and travel always remain the same from the first to the last shot.

As an exception, for the accuracy of the P30SK testers rated the second best result, in this case a 44 mm group with GECO Hexagon ammo at 15 meters (-6 points). The best result, a fantastic 19 mm with UMC hollow point cartridges, was achieved only once and was thus over 50% less than the average of the entire test ammunition, as well as the second best cartridge, and could not be repeated.

A detailed look at the Heckler and Koch P30SK S 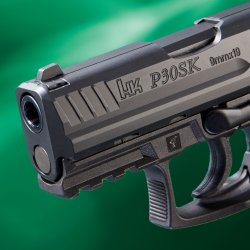 The test gun occasionally threw brass at the shooter's head (-1 point). But that was not the rule – another P30SK safely ejected to the side and there were no real malfunctions. The traditional DA-/SA trigger pre-load was quite crisp and the uniform pull weight was able to score points in this test area. The pull weight of more than 91 oz / 2.5 kg in SA mode and a 211.6 oz / 6 kg double action, however, spoiled the good impression (-4 P). Triggers don't have to be that stiff. The grip design comes from the large P30 and it's good that HK used it for the SFP9 series (-0 P.). In addition, when using the short ten-round magazines, the little finger fits comfortably under the handle. With the longer magazines with the P30 grip contour, the hand position largely corresponds to the full-grown standard version. In contrast to the rest of the operating elements, the decocker is best operated with the second hand and for left-handers the button is located on the wrong side of the hammer spur (-1 P.). All other levers can be found both on the right and left side of the frame and are ergonomically and functionally well designed. 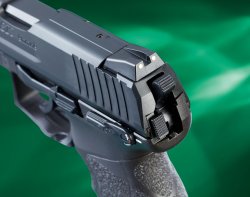 Marcus Heilscher
The rear sight is made of steel and offers photoluminescent dots. To the left of the sight is the decocker button.

The left slide stop lever remains on the frame during disassembly and with the (optional) thumb safety it's up to the users to decide whether to rest their thumb on the lever or to move their thumb under it. Both options seem equally convenient, especially as neither design nor function of the P30SK S forces the shooter to use the manual safety at all. The steel rear sight can only be moved sideways in the dovetail, but offers a high-contrast and quickly detectable sight picture in which the phosphorescent dots help in poor light (-0 P.). During processing, the barrel was too generously fitted at the rear (-2 P.). Apart from that, workmanship and finish were on the same high level as the manufacturer is used to and in the gun examined, the slide only had a little play on its guides.

That's enough for a total of 86 points and rating is very good. The P30SK may not be the smallest  9mm subcompact, but for fans of polymer pistols with an external hammer it offers good all-round features and fine shooting performances, plus options for the safety and trigger systems.

More information about H&K guns can be found at the Heckler & Koch website.

Subscribe to the Newsletter
This article is also available in this language:
DEIT
Click here for more information on the topics:
Heckler & Koch (HK)9 mm9x19 mm (9 Luger)PistolsSemiautomatic pistolsTest
That might interest you too:

After the civilian centerfire SP5 version in 9mm caliber introduced some time ago, in partnership with Umarex of Germany Heckler & Koch now unveils the MP5 .22LR rifle and pistol. They are intended as “a trainer, a suppressor host, or just the coolest .22LR fun gun on the range.”

In March 2021, the German parliament released the funds, and in the meantime the order has been received in Oberndorf: the German armed forces are introducing the MG5 manufactured by Heckler & Koch as the new general purpose machine gun. Over the next few years, more than 11,000 guns are to supplement the weapons of this type that have been introduced to date. Thus, at deliveries completed, the …

Heckler & Koch currently has no less than three assault rifle generations in its product portfolio: the G36, the HK416/417 and the HK433 weapon families. The Oberndorf-based German manufacturer recently unveiled new additions to the latter. We were on site at Heckler & Koch to take a close look at the assault rifles, including the HK437 model in .300 Blackout caliber for special forces and law …

It was the first service pistol of the GSG 9, the elite tactical unit of the German Federal Police,  and was considered the combat pistol par excellence in the 1970s. Manufactured with the most modern production techniques of the time, unusual in design and handling, it stood out from the mass of other pistols. But what makes the Heckler & Koch P9S so special technically – and contributes to its …