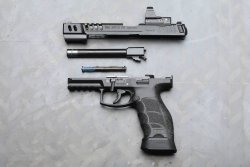 Even though Heckler & Koch is primarily known and appreciated as a military and law enforcement supplier, they have fortunately not forgotten sports shooters – and that is a tradition. Older generations will certainly remember HK's P9 Sport models, which are still occasionally encountered on the shooting range. The inherent precision was unique thanks to the fixed barrel. Then, at the end of the 1990s, the USP Expert appeared, originally intended for dynamic IPSC sports. With features such as a precision-enhancing O-ring at the barrel muzzle, a more sophisticated trigger, and micrometer sights and magwells, the company also wanted to compete in this booming sector of the civilian market. At the turn of the millennium, the USP Elite followed, which, with a barrel length of 5.6"/152 mm and a correspondingly long slide, offered more sight radius and thus also appealed to precision shooters in the static disciplines. There was never a sportier version of the P30. The same applies to the SFP 9 L (OR). Apparently, Heckler & Koch felt that the existing models covered the sporting field well enough – until now! Because just in time for spring 2021 comes the brand new model SFP9 Match OR – a polymer match pistol.

New for 2021 match polymer-framed pistol: what is the technical design of the Heckler & Koch SFP9 Match OR? 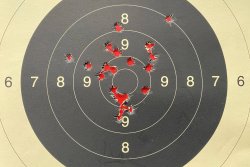 Tino Schmidt
Despite the two flyers, the 124-grain Sellier & Bellot was good enough for 190 out of 200 points freehand at 25 yards. Not bad for the first contact with the Heckler & Koch SFP9 Match OR.

The most obvious change is the longer slide, which has been generously skeletonized. It is now home to a 5.5"/140mm long barrel with a 12-groove rifling, as well as a 1-10" twist (1-250 mm). Pulling back the slide reveals a polished barrel, with a plastic O-ring on the muzzle. It is designed to improve the centering of the barrel for better accuracy. Certainly not comparable to a conventional barrel guide bushing, this method is however a good approach to improve the barrel guide. Once the ring is worn, it can be replaced even by shooters who are not particularly technically proficient.

The trigger has made a significant step forward. On an SFP9 L OR, we still measured around 84.64 oz/2400 grams; now it has dropped a good 35 oz/1000 grams. Around 24 oz/700 grams are already used up in the first stage, so that the same weight must be overcome again for the actual release – which one can live with. The trigger reset is easy to feel and is still okay at around 3 mm. 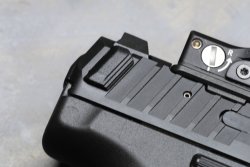 Dieter Licht
Heckler & Koch's patented and interchangeable racking aids are designed to provide a better slide grip. In the match version, however, the slide can also be gripped very well in the front skeletonized area.

By the way, the polymer sporting firearm comes with three 20-round sheet steel magazines of the usual good HK quality. These can be filled well with up to 20 cartridges and still snap cleanly into place even when full. If you open one of the magazines, you will see that five coils of the magazine spring protrude and thus there are enough functional reserves. In addition to the mounted huge plastic magwell, there is an optional flatter aluminum jet funnel that changes hands for 90 euros. In conjunction with the shorter 15-round magazines, the gun also fits into the IPSC Standard Division box. By the way, those who want to upgrade their existing magazines with a capacity of 15 cartridges in 9x19 to 17 cartridges can do so with a retro kit from Heckler & Koch. Price: 19.30 euros. Our test gun was equipped with the side "push button" magazine release, which can also be switched to the right side of the pistol. However, there is also the version with paddle-style magazine release, which can always be operated from both sides. This can also be done with the trigger finger, automatically adhering to the "finger off the trigger until ready to shoot" rule.

The SFP 9 models with 5"/127mm barrel usually have a micrometer rear sight with red fiber optic inserts enthroned on the top of the slide. Due to the milling for the micro red dot sight, the OR variants unfortunately cannot offer this fully adjustable rear sight, which also applies to our SFP 9 Match OR. Five adapter plates are available for use with MRDSs.

Test conclusions about the new SFP9 Match OR from Heckler & Koch:

The SFP9 Match OR is definitely the sportiest version of the Heckler & Koch SFP9 family. Workmanship, handling and function are just as convincing as its accuracy and the refined trigger. Only those who want to use the gun with iron sights have to make do with interchangeable sights. Perhaps this is where the accessories market will start to roll. The brand new SFP9 Match OR goes over the counter for 1235 euros, the adapter plates for 50 euros each (all prices may differ depending on the country). Not only in terms of price, but also in many other qualities, the SFP9 Match OR can easily keep up with the polymer match pistols of other established manufacturers and is definitely on the shortlist to become the new alpha leader on the range – in the SFP9 family it already is!

For more information on the SFP9 Match OR please visit the Heckler & Koch's website.

Subscribe to the Newsletter
This article is also available in this language:
DE
Click here for more information on the topics:
Heckler & Koch (HK)Pistols
That might interest you too: