In March 2021, the German parliament released the funds, and in the meantime the order has been received in Oberndorf: the German armed forces are introducing the MG5 manufactured by Heckler & Koch as the new general purpose machine gun. Over the next few years, more than 11,000 guns are to supplement the weapons of this type that have been introduced to date. Thus, at deliveries completed, the German military will have more than 18,000 MG5s in various versions at its disposal. 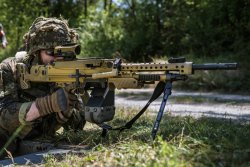 © Bundeswehr / Jana Neumann
With the MG5, the gunner also leans into the weapon for a stable aiming position. The Hensoldt 4x30i targeting optic serves as a scope.

For several years now, the German armed forces have been gradually replacing the MG3, which was previously used as a general purpose or standard machine gun, with the MG5. The actual roots even go back to the turn of the year 2008/2009. At that time, the Bundeswehr launched a machine gun program. This called for a light, a medium and a heavy machine gun as well as a medium machine gun with a high rate of fire. The new medium machine gun in 7.62x51mm was designed as the MG5. The HK MG4 in 5.56x45mm caliber already served as a light machine gun. As a heavy machine gun, the Bundeswehr currently uses the FN Browning M2 for vehicle armament and the FN Browning M3M for helicopter use. Under the catalog number MG6, the Bundeswehr procured a Germanized version of the Dillon-Aero M134-D externally powered multi-barrel gun in 7.62 NATO as a "high rate medium MG " for special forces.

Dr. Jan-Phillipp Weisswange
For the MG5A2, adapters are available to soldiers to use it infantry-style on the MG3 (front) field mounts.

At the time, Heckler & Koch had submitted the newly developed HK121 machine gun as the MG5. The HK121 underwent trials at the Wehrtechnische Dienststelle 91 (Technical Center 91) in Meppen, starting in 2010. A few more modifications were made at the customer's request. In April 2012, the Bundeswehr validated the weapon's functional and operational safety.

With the entry into service, designations also changed. The standard HK121 U version – U for “universal” - now goes by the designation MG5 in the Bundeswehr. The variant called Einbauwaffe (EBW, vehicle mounted) carries the designation MG5A1, while the infantry version (I) with the shorter barrel is called MG5A2. The HK121 special forces version with double spade grip is not currently cataloged. 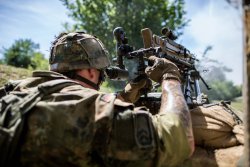 © Bundeswehr / Jana Neumann
Shooting with the MG5 from a field mount.

Although externally similar to the MG4, the MG5 differs technically from its "smaller sister". The patented weapon receiver does not consist of stamped sheet metal parts, but of two receiver shells made of cast steel as well as a connection block, which are joined together in a process that is also patented.

In a short film released in late summer 2019, the Bundeswehr gives four reasons for replacing the MG3 – which is still very popular among troops – with the MG5:

Watch the German Army video about the MG5 below. It's in German, but you can understand what they say by simply turning on the English subtitles. 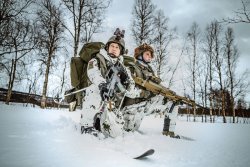 © Bundeswehr / Jana Neumann
The MG5 is already being used in a wide variety of climates, here on a NATO exercise in Norway.

The MG5 also has other noteworthy features: It is much more modular than the MG3: as mentioned, there are three different barrel lengths, and the weapon can also accept optics and attachments using Mil-Std 1913 rails. This is a very decisive advantage, especially with regard to night combat capability. In addition to improved ergonomics, the MG5 also offers several safety features. As the first weapon of its kind in the world, the safety can be put on and off in any loading condition. This is done via a fire selection lever on the pistol grip that can be operated from both sides. In addition, even when firing the DM151 hard-core cartridge, the HK121 withstands barrel obstruction in accordance with NATO standard AC225/D14: if one projectile gets stuck in the barrel, the next one is propelled out without the barrel bursting.

A digression: the concept of the standardized machine gun

A successful concept in infantry combat is: "No movement without fire cover". In almost all armed forces, therefore, machine guns serve as the infantry group's main weapon. Following the concept of the general purpose, or “universal” machine gun, they can be used in many ways and every soldier trained on them masters them almost blindly. Field mounts turn the MGs into veritable crew-served weapons. In this way, their effective range can be roughly doubled, from about 600 to 800 meters to as much as 1500 meters. Of course, the universal machine gun underwent a number of improvements. This was due to further developments in tactics, technology and personal equipment. Optics must also be increasingly integrated. It is not a matter of turning area firearms into precision rifles. But in terms of collateral damage, greater accuracy seems desirable, especially at night and with limited visibility. This also gives rise to numerous approaches to retrofit machine guns, i.e., combat upgrades of older weaponry.

The Western armed forces essentially employ two weapons as such general purpose machine guns: the MG42, or the MG3 further developed from it and introduced in 1969, and the FN MAG, both chambered for the 7.62x51mm. And this concept was also accepted in the former Warsaw Pact. As early as 1961, the Pulemyot Kalshnikova, i.e. Kalashnikov Machine Gun, designed by Mikhail Kalashnikov, was introduced to the troops as a medium general purpose MG. It fires belted 7.62x54R ammo, i.e. the classic Russian rifle cartridge. Poland procured its UKM-2000, a modernized version of the Eastern Bloc general purpose MG, converted to 7.62 NATO.

More information on the MG5 and other weapons can be found on the Heckler & Koch website.

Subscribe to the Newsletter
This article is also available in this language:
DEIT
Click here for more information on the topics:
Heckler & Koch (HK)Pro-zone
That might interest you too: