Smaller and smaller, but still with good grip ergonomics and, of course, a capacity that makes every double-barrel derringer green with envy. The result is the SIG Sauer P365 and is intended for daily concealed carry. The manufacturer even advertises the gun in the USA as a "Micro-Compact-Pistol". We at all4shooters.com  tested the pistol in practice, discovering a well-designed and accurate tiny handgun.

A contribution from Alexander Orel and Matthias S. Recktenwald / all4shooters.com07/23/2019

The small SIG Sauer is not alone with its size and technical features, however, but has fierce competition: The GLOCK G43 (single-stack magazine) and G26 Gen5 (double-stack) models, the Walther PPQ M2 SC and PPS models, as well as the Heckler & Koch SFP9 SK – all also sub-compact polymer pistols with striker-fired action and modified Browning system. As the measurement comparison showed, these pistol models usually don't differentiate much in length and height, but the width is about every millimeter: with a 1.02”/ 26 mm wide grip and a 0.9”/ 23 mm wide slide, the SIG Sauer P365 (which is supplied in a lockable case) is one of the narrowest double-stack polymer pistols in its class. Further refinements in its equipment include the loaded chamber viewport (intended for status checking), serrations also at the front of the slide, a mounting rail at the front bottom of the frame and the fact that the grip texture continues on the bottom of the magazines.

With the SIG Sauer pocket pistol on the shooting range

Of course, the little one also had to show what it's made of on the shooting range. And then the question immediately arose about how to fire a gun that could completely disappear in the hand: as always with such miniaturized firearms, the fingers fought for a place on the grip, with the result that the little finger had to make do under the magazine floor. You can't blame the model for this with a point deduction. This is characteristic of sub-compact pistols and is therefore the starting point for the design itself.

Evaluating the SIG Sauer P365 - comments on our test expericence 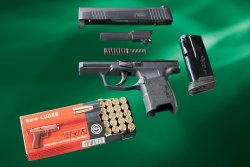 Marcus Heilscher
The size comparison to a GECO cartridge box shows how tiny the P365 is. The parts (from top): slide, barrel with Browning-Petter-SIG locking system, telescopic recoil spring, frame and magazine featuring the same texture on the bottom as on the grip.

Since the SIG Sauer P365 actually has a similar grip to the P320, since the small grip fitted nice in our hand without the gun tilting top-heavy, since the shooters were able to control the gun well despite the expected powerful kick, we can certify that SIG Sauer technicians made the maximum possible considering the limited space (-0 points). Controls arrangement is also conditioned by space: the disassembly lever, slide stop lever and magazine release button are only on the left according to the standards of the sub-compact class, but the magazine button can be reversed (-0 P.). There were no point deductions in the cycling/safety test section either, since the pistol worked trouble-free, cycled correctly and there were no unwanted shots (-0 P.) and because it also offered a first-class sighting picture for its class (-0 P.). The test pistol did not do quite so well in all the controls sections: each tester noticed a considerable, quite long trigger creep (-2 P.) and the smaller fit and finish defects (slide play, cracks at the back top of the grip, several scrape marks at the top of the locking block) caused further loss of points (-3 P.). In the accuracy test, the best result was a  49 mm grouping diameter (-8 p.), which was also expected.

What is the SIG Sauer P365 sub-compact pistol suitable for?

What to do with such a pocket pistol? The world's largest market for such concealed carry guns is in "The Land of the Free and the Home of the Brave". And yes, we know about all restrictions of carrying a pistol in most EU countries. Yet, no matter for what purpose you'll use it: the SIG Sauer P365 is well designed and the price/performance ratio is good.

Subscribe to the Newsletter
This article is also available in this language:
DEIT
Click here for more information on the topics:
SIG SauerTest9 mm9x19 mm (9 Luger)PistolsSemiautomatic pistols
That might interest you too: