Without doubt it belongs to the modern weapon classics: we are talking about the Heckler & Koch MP5. Introduced in 1964, this submachine gun – praised as accurate, handy and reliable, with its characteristic roller-delayed blowback system – has been used in countless missions against terrorists and other violent criminals all over the world. With the result that there is also an unparalleled variety of variants. For a long time, only one thing was missing – a legally compliant civilian version of the MP5, i.e. designed to be used only as a semi-automatic gun and never to be converted with spare parts to full-auto operation, reserved to law enforcement and the military. 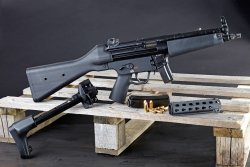 Marcus Heilscher
The HK SP5 is the civilian version of the legendary MP5.

In 2018 the time had come: a semi-automatic version derived from the HK MP5K called SP5K, featuring a short 4.5”/115 mm barrel and a handguard with integrated finger stop reaching over the muzzle. A version that performed well and without any problems in the test, but which also stood out due to a rather hard trigger and a slightly rickety fore-end. Nothing that particularly frightened fans. Even though potential buyers are probably limited to firearms collectors, the supporters of such guns warmly welcomed the SP5K – and immediately demanded more. More precisely: they wanted the civilian version of the standard MP5. And that's exactly what we're talking about here, as Heckler & Koch handed over such a SP5 to the all4shooters team for testing.

When it arrived and basked in the LED light of the editorial offices with the case open, you could think at first that there was an MP5 in front of you. The first time you took it in your hands, it seemed to confirm this impression. Everything fitted – the weight, the balance (still one of the best among submachine guns) and the controls arrangement. This even applied to the MP5-typical rear sight, which one team member complained about several times, and which, in combination with increasing presbyopia, made it difficult for him to achieve reasonable aiming via the open sights. Talking about the sights: the examinee presented itself with a drum rear sight that can be rotated in 4 positions and the front sight hood, which has always been a feature of the MP5. 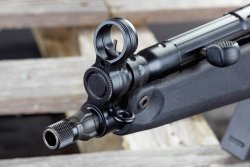 Marcus Heilscher
On the barrel of the HK SP5 a ½ x 28-UNEF thread. At the top, the front sight hood with the sight blade.

The main difference to the MP5 was mainly shown in the operating positions of the safety lever, which can be operated from both sides and can be positioned according to the corresponding pictograms in “Ready to fire” and “Safe”. The MP5 in turn has a selector lever with the single fire (E), safety (S) and full-auto (F) positions. A comparative look at a HK MP5 revealed that here 2 equally sized retaining pins connected the grip and the buttstock to the receiver. With the SP5, only one pin remained. The grip is pushed in at the bottom front and hooked; it can be released as soon as the buttstock pin is removed and the stock is pulled off. The 8.74”/222 mm-long barrel was suppressor-ready, there were a tri-lug mounting adaptor and – under a knurled protector – a muzzle thread, the latter of the ½x28 type and thus in compliance with the Unified Thread Standard (UNEF) used in the States and Canada: an indication that Heckler & Koch is also clearly targeting the US market with the SP5.

Features and accessories of the HK SP5 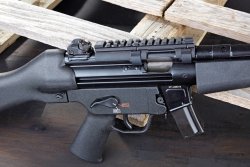 Marcus Heilscher
On the receiver of the HK SP5 a Picatinny rail can be attached. Above the pistol grip you can see the safety lever.

The SP5 comes standard with the polymer stock and the forward tapered handguard (known from the MP5 A3, among others), also made of polymer – both are factory-mounted. According to wholesaler Waimex, the gun costs 2499 euro in Germany (price may vary in your country). If you are looking for something different and have the right change for accessories, well, you can switch to HK's own accessories (more information on this can be found on the HK website). This applies, for example, to HK's Slim Line handguard with HKey interfaces (320 euro) or the retractable stock that can be extended or shortened by means of a lever and adjusted in three locking positions (648 euro). And it also concerns the part known as "mounting rail with STANAG 4694 profile", i.e. a Picatinny mounting rail (331 euro), which is placed on receiver from the side and fixed by means of two snap levers before being secured from above by a screw.

The test gun also had another short HKey Picatinny rail (length: 2.1”/54 mm, 65.70 euro), a sight adjustment tool (included, it costs 85.10 euro by itself) and an elastic carrying sling (67.50 euro), which could be attached to the SP5 with a snap hook (by snapping it onto the sling swivel hardware located on the rear of the receiver it can be used to stabilize the SP5K when the gun is used without a stock.) 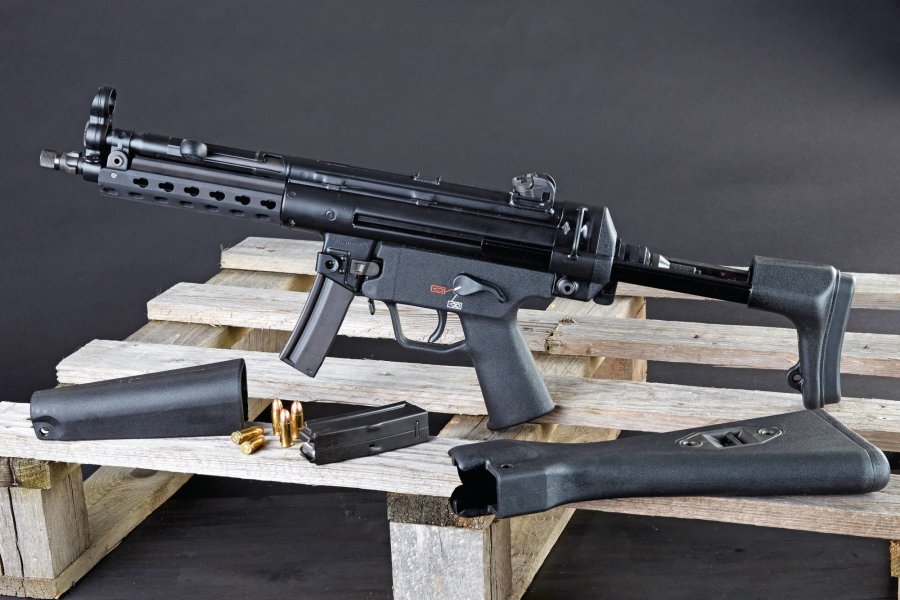 Marcus Heilscher
The HK SP5 can be converted to a forearm with Hkey interfaces and a three-position retractable stock.

Handling was a party for all the people of the editorial staff, because the mentioned accessories were a real tinkering box and disassembling and assembling was easy thanks to the locking pins (also known to every G3 user). If you took out the front pin directly behind the front sight tower, the hand guard could be loosened a little bit, so that it came out of its holding groove at the front of the receiver. Now you could simply remove it to the front and look at the barrel with model name and proof mark. When the rear locking pin was pulled off, the polymer stock could also be removed and replaced by the retractable stock supplied for testing. In addition – as mentioned above – the grip of the gun could be unhooked and removed too, so that the HK typical roller-delayed bolt, including the recoil spring, could be pulled backwards into the open.

A look at the inner workings of the gun and the receiver then showed the first-class quality to which HK is accustomed: top fits, minimal machining marks (and where unavoidable, impeccably neat). The quality of the sheet metal stamping on the receiver housing alone was enough to cause tears of emotion – this care seemed to come from another time and is painfully missed elsewhere today. Thanks to its rollers, the bolt ran audibly, but as soft as butter and crisply. And putting on and taking off the retractable stock required strength and precision, because to do that you have to deal with spring pressure and tight fits, which is also a sign of quality. The carrying sling was fine, being composed of a piece of nylon tape and an elastic, nylon-coated part, and also adjustable in length. Whoever wishes to do so may use the R3/3 carrying sling system, trimmed for all-round use, which HK introduced for the MP5 at the beginning of the 1970s. The corresponding attachments are available. 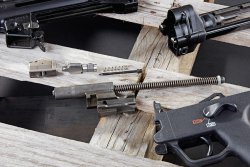 So everything good? Not quite. There was some criticism of the polymer handguard. Although it is very easy to fit by means of the locking pins and inserting it into the receiver, it does make a noticeable rattling sound. One of the colleagues described the trigger as "interesting" too. It was easier to adjust than on the SP5K version introduced in 2019 with its more than three and a half kilos pull, but one had the impression that the finger had to go a touch beyond the actual release point before it actually broke. That sounds stranger than it actually was. Overall, the HK SP5 offered a very refined, consistent trigger that could be released comfortably without any unpleasant creep or the like – and quickly too.

What also stood out during the handling, the magazine (there are 15 and 30-round versions, at 70 euro each, besides the 10-round one) can be released either via a side push button or a paddle, i.e. a centrally positioned metal lever that can be operated from both sides. As already mentioned, the selector is accessible from both sides thanks to two levers. If you want to press the also crisply and clearly defined, but tightly moving control upwards with the thumb of the shooting hand to secure the gun, you have to remove it completely from the grip. The testers managed to do this with the base of the thumb. All in all, the SP5 offered a level of manufacturing that HK has always been accustomed to and that also seemed reasonable in terms of price-quality ratio.

The civilian version of the MP5 on the shooting range

The Coronavirus emergency forced the all4shooters team to limit its test firing, but the team tested the SP5 on the 25 m distance. We mounted a lightweight Leupold VX5 HD 1-5x24 riflescope using the removable mounting rail. And so shooting with the SP5 became a poem: not only was it free of any malfunction and the extractor pushed the spent cases out of the fluted chamber to the right into the fresh air with great effect, but the gun produced more than just a hole-to-hole group.

It achieved its best five-shot group of 0.47”/12 mm with the Sellier & Bellot 100 grain softpoint ammo. The majority of the other results were between 0.66” and 1.14” (17-29 mm). Sure, the Fiocchi cartridge (123 grains, Truncated Cone) was a test load that the SP5 was not so comfortable with. But the bottom line is that a gun designed for pistol cartridges that delivers consistent groups in the 0.39”-1” (10-25 mm) range over 25 meters, is also suitable for twice or even four times that shooting distance.

"I really like this gun," as one of the testers put it after the shooting tests. And there is nothing to add to that statement on the HK SP5 for the test conclusion.

Subscribe to the Newsletter
This article is also available in this language:
DEIT
Click here for more information on the topics:
Heckler & Koch (HK)9 mm9x19 mm (9 Luger)Semiautomatic riflesRiflesTest
That might interest you too: