A visit to Heckler & Koch: the new HK437 assault rifle in .300 Blackout caliber for law enforcement and special forces

Heckler & Koch currently has no less than three assault rifle generations in its product portfolio: the G36, the HK416/417 and the HK433 weapon families. The Oberndorf-based German manufacturer recently unveiled new additions to the latter. We were on site at Heckler & Koch to take a close look at the assault rifles, including the HK437 model in .300 Blackout caliber for special forces and law enforcement.

All three of Heckler & Koch's assault rifle families are currently in use around the world. There is a lot of movement on the military home market right now. For example, the German armed forces are about to undergo a double generation change in the assault rifle sector. The HK416A7 is currently being marketed as the "Sturmgewehr Spezialkräfte leicht" (light assault rifle) under the catalog designation G95k. More than half of the approximately 1750 rifles ordered have already been delivered to the troops.

Regardless of this, the German Ministry of Defense is looking for a successor to the G36, which was introduced in 1997, with the "System Sturmgewehr Bundeswehr" program. This program is currently on hold – the outcome is uncertain. The discussion is focusing on the HK416 and the competitor weapon MK556 from the Suhl-based weapons manufacturer C.G. Haenel, both AR-15 derivatives. Moreover, there is news to report on the family of the second candidate from Oberndorf, the HK433. For a better understanding, first a look at the 433 system itself.

Introduced to the public in 2017, the HK433 in 5.56x45 mm is part of the fourth generation of assault rifles developed by Heckler & Koch. From the very beginning, the development was determined by the idea of a versatile family of weapons: the modular assault rifle was to be flexibly adaptable to different requirements and applications by means of various barrels, grips and interfaces for optics and attachments.

Read here our practical test of the HK 433.

Jan-Phillipp Weisswange
The HK437 in .300 BLK caliber is one of the newest members of Heckler & Koch's assault rifle family.

The upper receiver of the HK433 is made from extruded aluminum, which enables economical production. On the receiver's top there is a continuous STANAG-4694 rail at 12 o'clock. The handguard also features HKey or optional M-LOK interfaces at 3 and 9 o'clock and a Mil-Std 1913 rail at 6 o'clock. This allows the weapon to accept different sights, laser light modules or other attachments. Technically, the HK433 is a short-stroke gas operated rifle with a rotary bolt. The recoil spring design is similar to that of the G36. 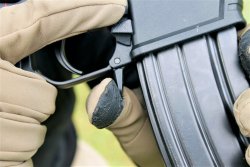 So unlike AR-15 architectures with their typical buffer tubes, a folding buttstock can be fitted. This locks on the right side of the weapon. The folding stock brings advantages in confined spaces or for vehicle-borne use. The buttstock can also be adjusted in length and height, allowing shooters to adapt the HK433 to their stature and equipment. Likewise, the rifle can be fitted with, among other things, the folding stock for visor helmet developed for the G36C, which allows shooting with the ballistic visor lowered.

The lower receiver with the integrated trigger assembly is available according to both the G36 and M4/HK416 operating philosophies. In both cases, the weapon can be operated ambidextrously. Likewise, the grip can be individually adapted to the firing hand by means of the familiar adapter backstraps from the HK pistols of the P30 or SFP9 series. Furthermore, there is a small storage compartment in the grip, for example for a tool or a boresnake bore cleaner. The HK433 can use all common AR15-type magazines. 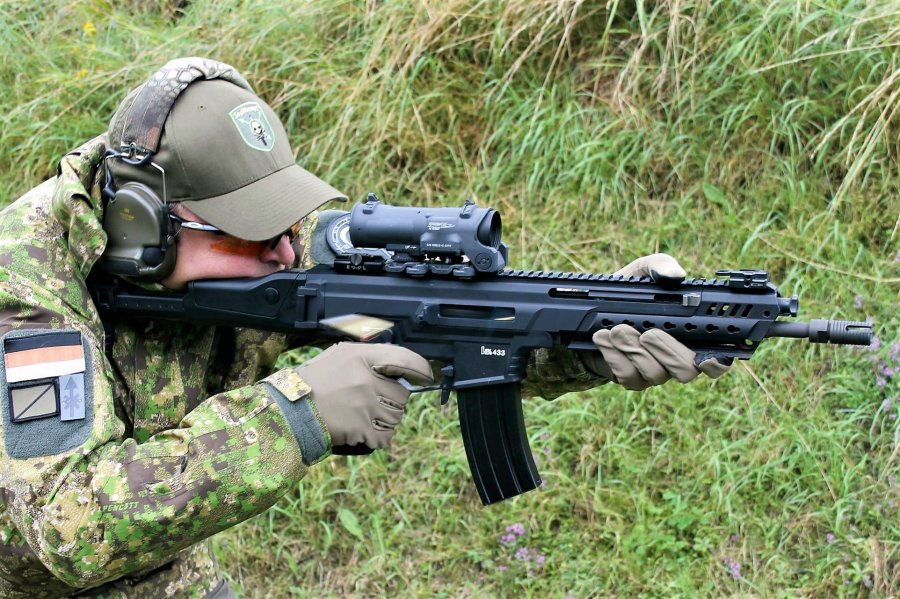 © Heckler & Koch / Concamo
Shooting with an earlier version of the HK433. Here an Elcan Specter is fitted on the rifle.

HK433 assault rifle: "soldier safe" in use and maintenance 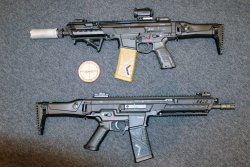 The rifle's non-reciprocating charging handle is reminiscent of the G3 in terms of handling. It can be moved to the other side of the rifle without tools. It also serves as a locking aid. Markings on the ejection port indicate the best position for returning the bolt to check the chamber. All this means that G3/G36 or G38/G95k/G27 shooters will immediately find their way around the gun.

Jan-Phillipp Weisswange
The modified G36 has a slim line handguard with HKey interfaces, a Mil-Std-1913/STANAG-4694 rail on the frame, and a fully adjustable butstock.

All loading operations can be carried out in a safety-on condition, and drop safety in accordance with NATO standard AC225/D14 is ensured both in the safety-on and in the safety-off condition, according to the manufacturer. The HK433 is also "soldier-proof" when it comes to disassembly: the weapon can be disassembled without the use of tools into the upper receiver with barrel, handguard, buttstock, recoil spring, bolt assembly, lower receiver with grip and trigger assembly, and magazine. The retaining bolts are captive.

HK437: an assault rifle in .300 Blackout for Special Forces 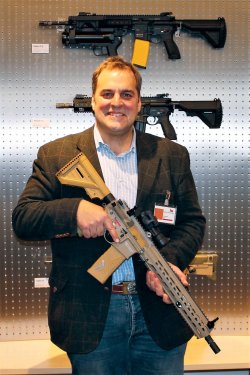 Heckler & Koch recently showed that it is continuing to expand its latest assault rifle family with the HK437 model. Behind it is a version of the HK433 in .300 BLK caliber, aka 7.62x35 mm. To explain, the new HK numerical code categorizes the firearms developed and manufactured by Heckler & Koch according to generation, type and caliber. The 7 stands for special caliber, which also includes the .300 BLK: the medium caliber .300 BLK is considered an alternative to the previously standardized NATO 5.56x45 mm and 7.62x51 mm calibers, especially for law enforcement and special forces use.

Firearms in .300 BLK appear to make sense where relatively much effect must be achieved on the target at relatively manageable ranges with quite compact weapon dimensions. On the one hand, this makes them interesting as medium-range guns for police forces, but also as special weapons for special forces. Further, compact suppressed .300 BLK rifles with subsonic ammunition could establish a new generation of silenced special weapons, as they significantly outperform submachine guns previously used in this role.

© Rheinmetall
The laser-light package on the System Sturmgewehr Bundeswehr consists of the Rheinmetall LM-VTAL laser module and the MissionLight weapon light.

In addition, there is a new magazine. This has appropriate safety features to prevent the accidental insertion of 5.56 magazines into the gun. Likewise, with an eye to conceivable but undesirable mix-ups, the factory has changed the lower part of the receiver somewhat. This is to prevent unintentional mounting of 433 components on the 437. The adjustable gas block is largely the same as the one known from the HK416A5 and HK433 respectively. 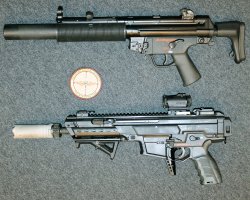 Jan-Phillipp Weisswange
The HK437 with folded stock and Rotex suppressor (bottom) is shorter than an MP5SD with collapsed buttstock (top).

The HK437 can use both supersonic and subsonic ammunition. With a compact Rotex suppressor and a 9" barrel, it comes in at nearly identical dimensions to the MP5SD (see our review of the civilian version of the Heckler & Koch MP5 here). However, it achieves significantly better performance in both the supersonic and subsonic ranges. The MP5SD fires a supersonic DM41 cartridge to 285 meters per second and provides a muzzle energy of 380 joules.

In contrast, a .300-BLK subsonic load with 220-grain bullet weight fired from a compact assault rifle with a 9"/229 mm barrel already reaches about 320 meters per second and almost double the muzzle energy, with about 742 joules. This results in higher operational ranges and better effectiveness on target with virtually the same size.

Even though the procurement process for the new Bundeswehr assault rifle system is currently on hold, one thing is certain: all three candidate weapons have met the German armed forces' stringent requirements criteria. Word of this is likely to spread on the international market. So regardless of the further outcome of the German assault rifle program, things are likely to remain lively in the "multi-generation house" of Heckler & Koch.

For military small arms the so-called system approach has now become established: the system includes the respective weapon itself, plus ammunition and magazines, optics, laser light modules, suppressors if applicable, and other peripheral equipment such as carrying slings, magazine pouches, and bayonets. In an extended sense, training also counts as part of the weapon system. The Bundeswehr follows this approach through its philosophy of basic weapon and additional sets. The additonal sets are in turn based on the so-called proficiency levels 1 to 4.

Subscribe to the Newsletter
This article is also available in this language:
DEIT
Click here for more information on the topics:
Heckler & Koch (HK)Pro-zone
That might interest you too: