Shotguns with box magazines seem to be more and more popular nowadays. The most sporty offshoot of the Turkish manufacturer Derya is available in a comprehensive set for around 1200 euros. But what can you expect in return? We tested it.

Dieter Licht
The narrow handguard is very confortable to grab even in long-term use. Due to the small distance from the gas block, slightly black hands are hard to avoid, unless you wear gloves.

Shotguns with box magazines based on the AR-15 or AK-47 semi-automatic rifle platforms exert a certain charm already in the overall appearance. Such guns have often been guests of all4shooters.com – for example, we presented the Typhoon Defence F-12 or the Armsan RS-S1 with video. But they also have special features in terms of technology and handling. Reloading is much faster and easier than with semi-automatics with a tubular magazine located under the barrel. Even those who are not under time pressure often find this type of reloading more comfortable. Although it is possible to increase the reloading speed of semi-auto shotguns with tubular magazines by using special manual loading techniques or quick-loaders, those who are familiar with the magazine change from their rifle do not need to get used to it and, thanks to the design, it is quicker anyway. In addition, the many types of ammunition that can be fired from shotguns in the form of slugs, buckshot or birdshot can be changed more quickly if loaded reserve magazines are available. This is a circumstance that makes many shotguns with box magazines interesting for law enforcement. In the case of pump-action shotguns, such designs can be seen in the Mossberg 590 M or Remington 870 M, for example. However, anyone who wants to start in the IPSC field with the box magazine automatically enters the Open Division and thus the "Formula 1" of this dynamic, varied sport. Therefore, our protagonist is designed precisely for this international discipline, but could also be used for other purposes such as popper target shooting

When people think of shotguns, they often have Italian products or small gunmakers in mind. However, more and more shotguns are coming out of Turkey in the form of semi-auto, pump-action and also break-barrel models. Often these are in the lower to mid price range and those who don't want to or can't spend a lot of money will find an inexpensive selection here. The Turkish manufacturer Derya, which is also active in the automotive sector, has been involved in gun manufacturing since 1998 and offers some shotguns with box magazines in the MK-12 model series. In Europe, the MK-12 IPSC is available in versions with a barrel length of 17”/43 centimeters, 19.6”/50 centimeters and 23.6”/60 centimeters. The fact that the design is based on the AR-15 is not only due to the spirit of the times, but also has practical reasons. The recoil is straight into the shoulder and the controls are located where they are on the AR-15. This is also a great advantage in action-packed 3-gun or multigun sports, for example, because you can operate the two different weapon systems, rifle and shotgun, identically. Thus, feeding by means of a box magazine, one can then act quickly in the usual manner without having to change over. This is how simple and practical the changeover to the shotgun can be.

Dieter Licht
The Derya MK-12 IPSC disassembled into its main components. This shows the AR-15 style of construction.

Ergonomics and controls of the Derya MK-12 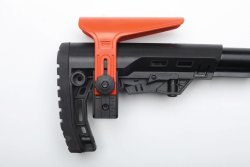 Dieter Licht
The cheek rest of the Derya IPSC shotgun can be adjusted continuously by the shooter.

While we are on the subject of ergonomics, it should not go unmentioned that the charging handle can be moved to the left side. This system is called DAXOS (Dual Axis Operation System) by the Turkish manufacturer. The magazine release can only be found on the right side and the bolt release is located in the usual manner on the left side of the gun. The M4-style buttstock is adjustable in length in five settings, allowing a length of pull from 12 to 15 inches (304-386 mm). The height-adjustable cheek rest can be very helpful when using a red dot sight. The large magwell enables fluid magazine changes in the heat of competition. Like the controls, it features a signal orange finish, which underscores the sporty feel of the Derya MK-12 IPSC. However, after only a short period of testing and shooting practice, the first signs of wear began to show, although it appears to be a baked-on finish. Considering the low price, you probably have to live with that. But hand on heart, which sports equipment still looks immaculate after eager use? The trigger with its wide, ribbed shoe looks sportier than it is. At around 7.9 lb/3600 grams, it could definitely be a bit lighter. 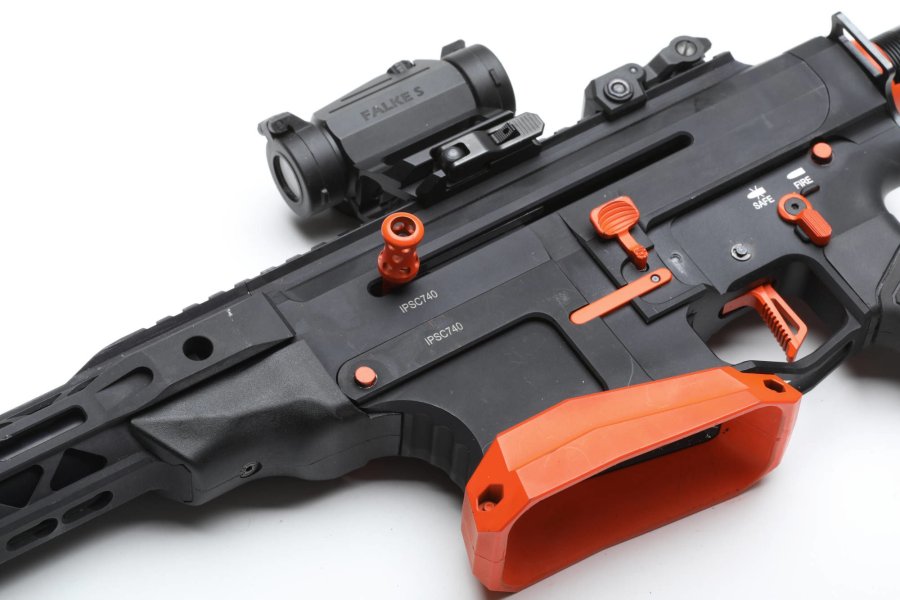 Dieter Licht
The MK-12's large magwell makes for faster box magazine changes. The picture also shows the loading lever that can be switched to the left side.

The muzzle of the Derya IPSC shotgun: compensator and chokes 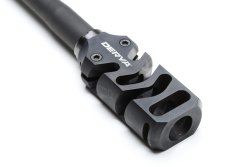 Dieter Licht
The large compensator helps to better control recoil. Together with the box magazine, it also provides the distinctive look of the Derya MK-12 sporting shotgun.

At the muzzle sits the mighty compensator, whose size and number baffles are due to the rather low gas pressure cartridges. An important feature of shotguns for sporting use is the adjustment of the shot pattenr by means of interchangeable chokes. Three choke sizes with cylinder, half and full choke are included with the gun. At least according to the instruction manual, our test gun probably had another cylinder choke instead of the half choke in the black plastic box, which is probably an isolated case. It is practical that Derya includes a long wrench with which the chrome-plated chokes can be changed without removing the compensator. However, if you want to disassemble the gun for cleaning, you have to remove the barrel and bolt to the front, even if the AR-15 design with the hinged upper and lower receiver might suggest otherwise. By the way, if you don't want to use the compensator, Derya includes a long barrel sleeve that can be used to nicely disguise the muzzle area. 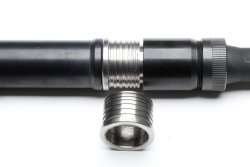 Dieter Licht
Included with the Derya MK-12 IPSC are two gas rings for hard and light ammunition. For the sporting 12/70 cartridges, it should generally be the "Light Loads" version.

On the short-stroke gas operated gun, three 120-degree offset ports tap the gas and two tappets transfer the impulse to the bolt carrier. In the hard case with wheels and lots of accessories, you discover two gas rings. The "Heavy Load" version is intended for real magnum loads in 12/76. We therefore immediately installed the "Light Load" version in order to be able to better test the sporting loads for function. On the top of the aluminum upper receiver, a MIL-STD-1913 mounting rail is enthroned with a quite useful back up iron sight (BUIS). However, a red dot sight might be the better option here as an aiming aid, which is why we also used a Falke S for our test, which fits the Derya MK-12 IPSC perfectly with its good price-performance ratio.

In addition to accuracy testing at 25 meters, we fired many shotgun shells with payloads ranging from 28 to 32 grams on the falling plate targets. The box magazines are very easy to reload, except for the last cartridge, which requires a spirited thumb pressure. After filling, the magazines snap into the gun cleanly and without much effort. With the 24-gram cartridges, such as the Rottweil Special Trap, you are definitely at the lowest end of functional reliability. Often the cases were caught by the bolt or not fed at all because it did not reach its rearmost end position. However, this is negligible for the intended use as an IPSC shotgun, as the 24-gram load does not reach the minimum factor of 480 anyway. In the test, a total of three malfunctions occurred with the S&B Whiteline Slug and twice with the 29 g GECO Competition. So you should definitely check which ammunition works best in the shotgun. It is not always the pure cartridge description that is sufficient. For example, the Fiocchi F3 worked better than the 29-gram GECO Competition despite the low impulse/factor.
Somewhat complicating matters is the fact that the blunt cartridges from the box magazines have to do more climbing to get into the chamber than in shotguns with tubular magazines and loading spoons. The straight-line recoil pattern and large-area compensator provided low muzzle flip and comfortable recoil, making even harder 12/70 loads easy to shoot over the long haul. Thus, even after a long day of training, one leaves the stand without a tired shoulder. In this respect, the Derya MK-12 IPSC is extremely successful and provides a lot of shooting fun.

Dieter Licht
A nice alternative: if you do not want to use the compensator of the MK-12 IPSC, you can cover the barrel with a shapely barrel sleeve.

If you disregard small, negligible flaws such as a relatively high trigger weight and the not very resistant surface coating of the operating elements, Derya offers an impressive overall package with the MK-12 IPSC with a good price/performance ratio. After all, in addition to the cleanly made and perfectly functioning AR-style semi-auto shotgun, you get four magazines (1x 2-round, 3x 10-round) and three interchangeable chokes in an easy-to-carry rolling case with carrying handle. The whole fun costs around 1200 euros. Fair deal!

For more information about Derya weapons, visit the manufacturer's website.

Subscribe to the Newsletter
This article is also available in this language:
DEIT
Click here for more information on the topics:
ShotgunsIPSC / Dynamic shooting sport12 (gauge)RWS ammunitionSemiautomatic shotguns
That might interest you too: 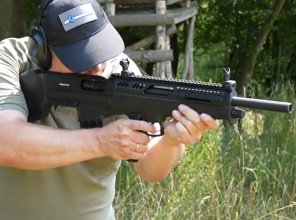 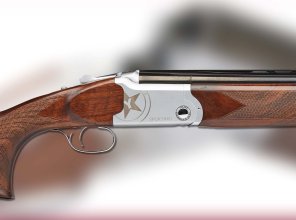 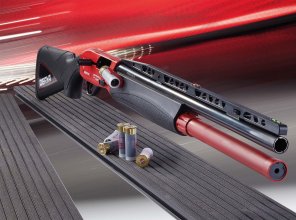 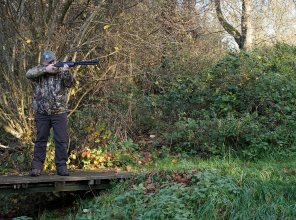 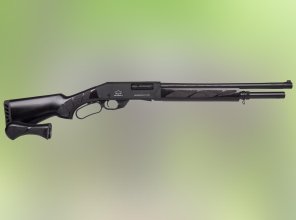 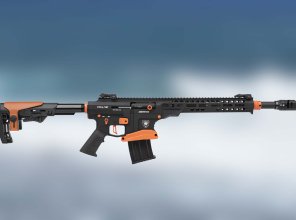 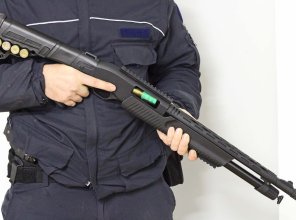 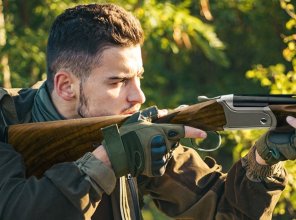