The origins of RWS date back to 1855 when Heinrich Utendoerffer asked for and obtained a license to set up a laboratory for the production of primer compositions in Nuremberg, Germany. In 1889 the laboratory was acquired by the "Rheinisch Westfälische Sprengstoff-Actien-Gesellschaft" (RWS) which had been founded in 1886 in Troisdorf. The company name translates as "Explosives Society of North Rhine-Westphalia". In 1894 the company moved to Stadeln, a district in nearby Fürth, where it is still located. In 1931 RWS was taken over by Dynamit Nobel. In 2002 it became part of the Swiss technology group RUAG and became RUAG Ammotec GmbH. Today, RWS is one of the historic European brands in the field of ammunition for civilian and military use, thanks to more than a century of experience in the development and production of cartridges for medium and high-end use in sports and hunting.

RWS is the only German manufacturer that produces all components of ball cartridges, such as bullets, cartridges and primers in-house. It also carries out a very strict daily quality control using 35 specialized employees who perform 11 checks on the bullets and 8 on the cases. This guarantees a very high standard of ammunition quality, even for the most economical product lines.

RWS catalog includes centerfire ammunition for hunting and shooting guns, rimfire ammo for pistols and rifles and a very wide choice of pellets for air guns.

One of the winning features of the RWS production is versatility and continuous research of innovative products, as well as the subsequent, constant product updating. A good example are RWS Short Rifle cartridges, which have been developed to guarantee the best performance in terms of accuracy and energy in short barreled hunting rifles (from 16.5” / 42 cm to 21.6” / 55 cm ). Initially available only in .308 Winchester, RWS Short Rifle cartridges were very well received throughout Europe, being perfect for hunting wild boar with semi-automatic rifles. The German company immediately set up loads in other calibers such as the .30-06 and .300 Winchester Magnum.

RWS is also at the forefront in lead-free ammunition, where it offers two types of tin-based bullets: the Evolution Green is a part-fragmentation bullet, while for those who prefer full-jacketed bullets with a more stable mass, the RWS HIT has been designed to retain more weight on impact, by mushrooming rather than fragmenting.

Back to high-performance hunting loads, it is worth mentioning the ever-increasing number of cartridges fitted with the RWS Speed Tip Professional bullet, a fragmentation bullet with a dual-core construction, based on the H-jacket principle.

As far as sport shooting ammunition is concerned, we would just like to point out that for 10 years the RWS Target Elite Plus line has been synonymous with match quality cartridges, comparable to hand-reloaded ammo. The high quality standards of these cartridges translates into consistent accuracy up to a range of 1200 meters. The cases for this line are specially produced and the HPBT Match bullets are carefully selected. In 2019 the line was expanded with two new calibers and two new loads in .308 Winchester caliber.

To learn more about RWS ammunition please visit the RWS ammunition website, which is packed with information, special content, videos, apps and much more...!

As we know, the IWA OutdoorClassics 2020 was unfortunately cancelled, but we have already presented the most important new products for 2020. To complete these reports now that all products are available in stores, Hannes Dikhoff, Gunnar Petrikat and Heinz Winkler from Norma, GECO/RWS and Rottweil were kind enough to give us exclusive interviews via Skype, which we present to you here on …

RWS is entering the Internet stage with a completely renewed and freshly designed website. Just as RWS ammunition is manufactured by traditional craftsmanship in combination with the latest technology, it presents itself in the virtual world in the same way: tradition-conscious and at the cutting edge of modernity at the same time. We will take you on a digital tour of the new RWS website, …

New for 2020: Due to the great interest, RWS has now extended the popular Short Rifle series with the following loads: .308 Win. Evo Green, .30-06 Evo Green and 8x57 IS Speed Tip Professional. This means that hunting ammunition with the slogan "full power from short barrels" is now available in even more widely used hunting calibers. Here you will find all available calibers and prices.

New for 2020: RWS is expanding its Field Line with two additional loads. Both a new solid bullet and a fragmentation bullet will be available – depending on the intended use. In the development of these rimfire cartridges, lead elimination was a top priority. We take a first look at the new additions.

In recent years RWS introduced the Speed Tip Professional bullet for the long range caliber .338 Lapua Magnum and in .30, 7mm and 8mm calibers. The modern, highly effective bullet is a further development of the proven RWS H-Jacket technology and was quickly appreciated by hunters. Which new calibers can we expect in 2020, and when will they be available? Read on to learn more.

New for 2020: The reloading of cartridges makes sense for sport shooters and hunters alike: it ensures absolute control over your own load, that can thus be perfectly suited to your gun and its intended use. The components are particularly important here. That's why RWS is now introducing not only a new, practical packaging design for its reloading products, but also an expansion of its product …

New for 2020: The biathlon sport enjoys great popularity in many countries. In the winter season, it fascinates spectators not only in front of the TV, but on the ski run too. Because of the sport's versatility, athletes depend on the best possible equipment in order to achieve their top performances. RWS now offers two new sport rimfire cartridges that set new standards in accuracy.

In recent years, RWS EVO Green has established itself as a clever, lead-free alternative, especially where required by law. The modern, highly effective and lead-free bullet is a further development of the proven RWS H-Jacket technology. For even better performance, the weight of the RWS EVO Green bullet in .30 calibers is now being adjusted from 8.8 g to 9.0 g.

rws-ammunition10/25/2019New RWS Ammo Advisor: for any hunting situation, on your smart device

Whether you want to hunt wild boar with a short rifle or roe deer at long range, every hunt is different and requires the right ammunition. RWS has released a completely renewed mobile hunting ammo advisor. This progressive web app is particularly flexible and helps the hunter to find the right ammunition for any hunting situation. We took a closer look at the RWS ammunition advisor and introduce … 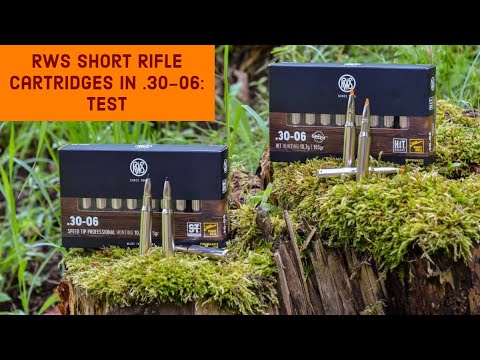 "Full performance from short barrels": with this claim the ammo manufacturer RWS advertises its brand new cartridges. But does the Short Rifle ammunition keep what it promises on paper? And what advantages does it offer? We took a closer look at the rifle cartridges in our exclusive video and we introduced their features.  In addition to the previous .308 Win. version, there are currently four …

"Full performance from short barrels": with this claim the ammo manufacturer RWS advertises its brand new cartridge. But does the Short Rifle ammunition keep what it promises on paper? And what advantages does it offer? We took a closer look at the rifle cartridges in our exclusive  video and introduced their features. Currently 5 calibers with different bullet options are available – classic and …

IWA 2019 / New from RWS: due to the high demand for Short Rifle ammunition, the series will be upgraded with 6 new loads. The Speed Tip Professional bullet is now also available in 3 other calibers and the Target Elite Plus cartridges are offered in new calibers and loads. Find out here what’s right for you!

Swarovski Optik and The Monocular invited enthusiastic hunters and from all around the world to try the latest products and provide their initial feedback on a trip to Croatia from April 7 to 8. RWS attended as the ammunition partner, providing the Speed Tip Professional bullets to test the gear.

IWA Show 2018 / New from RWS: an overview of the new products from the ammunition manufacturer. At the trade fair RWS presented new, practical packages for rifle cartridges, an expansion of the 10.3x68 Mag. caliber line and the RWS Speed Tip Professional bullet along with special cartridges for short barrels in .308 Win. caliber.

RWS invited bloggers, influencers and networkers from the hunting sector before the official start of IWA 2018. The special guests could take a closer look at the novelties of well-known brands and even test them at the event. We have been at the event and will show you what we discovered.