In the last installment of our series we dealt with self-defense using the standard motion sequences of the "Martial Cane Concepts" (MCC) system, which can of course be instinctively adapted to the circumstances depending on how serious the situation is. This time, our author Michael Janich deepens the topic and shows advanced stick techniques for all4shooters.

Also this time, the "unarmed defense" headline does not fit perfectly, because it’s again about the defense with a walking stick. One thing you often see in traditional martial arts is the parrying of a blow with the shaft or middle part of the stick. Let's think about it for a moment: the attacker is close enough to us to land a blow. Our defense is to lift the stick up from the ground in a wide arc to block this blow. Even if we had exceptionally good reflexes and firm wrists, our chances of being able to ward off the aggressor's attack in time would be slim. If you are also no longer the youngest and really need the walking stick as a walking aid, the chances of a successful defense dwindle even more.

Adapting the defense with the walking stick 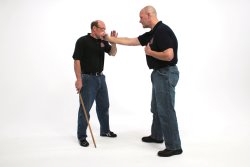 Michael Janich
If the attacker wants to strike us, we use the sweeping movement of our left hand to parry the aggressor's blow.

Let’s recall now the MCC starting or guard position explained in the last installment and adapt it to the circumstances: we move our left hand from left to right in front of our body. This sweeping movement is very instinctive and very similar in body mechanics to the classic defense of a boxer. So when the blow comes, we deflect it with the sweeping movement of our left hand. 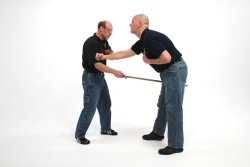 Michael Janich
At the same time we lift the stick with our right hand in the direction of our left hand, as if we wanted to take the two-handed guard position with the stick. But we hit the aggressor in the abdomen with the stick.

At the same time we move the stick forward with the right hand and since we are already close, our opponent will now be in the way of our stick. That's good, because we simply continue the movement and hit the opponent in the abdomen with the stick.

Now we pull the stick back and take our guard position again to be prepared for further actions. If the aggressor fires another blow, we strike a two-handed thrust from the guard position with the tip of the stick to the aggressor's chest. The power and range of this thrust will ensure that the aggressor’s strike movement will not only run into emptiness, but will be prematurely aborted too. This tactic is easier to learn and perform under stress than a defensive block and normally better suited to solve the problem quickly.

The two-handed thrust with the walking stick

If necessary, the two-handed straight thrust can be completed with a forward slashing blow on the shin or knee of our opponent. In the movement sequence this would correspond to parts 2 to 4 of our MCC standard sequence as explained in the last installment. The MCC starting and guard position is also ideal for defending against an attacker who tries to choke us with both hands or grab us by the collar. If the aggressor has already succeeded in grabbing us with both hands and we have the necessary freedom of movement to move backwards, then we take a step backwards, take our guard position and immediately execute our two-handed stick-tip thrust to release the attacker’s grip and drive our opponent backwards. We immediately complete it with a blow to the shin or knee.

Michael Janich
The motion sequence of the MCC, starting with the guard position shown here again, provide a basis for a very practical strike defense. If we have the opportunity to take up our guard position so quickly, before the attacker can hit us with a blow, then we simply perform a two-handed...

If, however, we do not have the possibility to dodge backwards, then we move our left hand over the attacker’s arms and the stick with our right hand so far that we can cling to it with our left hand and more or less take our guard position with both hands. Now the aggressor’s arms are below our left arm and the stick. We press our right hand against our hips and with the strength of our back muscles we pull our left elbow back to our upper body. Through this movement, the stick is painfully pulled over the radial nerves of the aggressor’s trapped forearms, dissolving the stranglehold. In addition, we pull the attacker even closer to us with the upper body tilted. As soon as the grab is released, we push the middle part of the stick into the aggressor’s face with both hands. If necessary, the aggressor's shin or knee is struck with a powerful blow.

Some final thoughts about the stick

Even though the walking stick is a very effective defense tool with a long range, you should also know how to use it in confined spaces at close quarters. The secret here is to discover the potential of the movements of our MCC standard sequence through training in order to be able to use it effectively with an open mind depending on the situation. Train hard and always play it safe.