If criminals and street fighters have brought you down, it often happens that they kick the victim lying on the ground with the greatest brutality. They will not follow you to the ground. While many self-defense systems teach that ground combat automatically leads to wrestling techniques, the ugly truth nowadays looks different (the keyword here is “subway basher”). They will simply stomp their victim. The expert Michael Janich shows on all4shooters.com how to defend yourself against such attacks.

In the last installment (6) we dealt with ground fighting under realistic street conditions. We want to continue and deepen this topic here.

The golden rule is to try to stand on your feet under all circumstances during a street attack. Standing upright is the best, most versatile fighting platform that gives us the advantage of mobility. If you go down in a fight, you have to try to get back on your feet as soon as possible. At the same time, however, you must not neglect to protect yourself in order to avoid taking hard kicks.

How to behave on the ground

The best way to do this is to roll to the left hip side, pull both legs to the body and bend your knees to protect yourself. Place your left hand on the floor, your right elbow on your right knee and press your right palm firmly against your temples. This posture or structure forms a "frame" from the right foot to the head and allows us to block kicks targeted to our head by turning our frame in the direction of kick. In addition, this defensive posture allows a quick return to the upright position by pushing yourself off the ground with your left hand. If you don't have a chance to reach a standing defensive position, you have to fight temporarily from the ground. To make this as effective as possible, we should limit the targets we offer.

Michael Janich
To defend yourself effectively on the ground, lie on your back, lift your head, protect it with your arms and bring your feet close to your buttocks.

What is taught in other self-defense systems

Many self-defense systems teach you to take a lateral position on the ground and to throw lateral kicks. If the attacker tries to circle around us and thus avoid our defensive kicks, then we should turn our body, using the hands on the ground, towards the respective position of the opponent, in order to be able to maintain our defense with the feet. This may work against a single attacker. But when we defend against multiple aggressors, the side position always means that we present our vulnerable spine for attack. In addition, the hands positioned on the ground prevent the head from being protected for body turns. Neither is good for us. Another often taught technique is the "bicycle kick". These are circular kicks that are similar in movement to pedalling a bicycle. Because you lie on your back, your spine is protected. But to be able to keep an eye on an aggressor circling around us, we still need our hands on the ground for the body turns and so the head remains unprotected. You are also very vulnerable to lateral attacks by multiple attackers.

If an attacker approaches from the side and tries to kick us in the ribs or against the head, we lift our knee on the attack side, make contact with our elbow and press the palm of our hand against the head to create the already explained "frame" from head to toe. Just before the attacker’s kick can affect us, we roll towards the opponent and stop a large part of the kick force with our frame. After this defense we immediately cling to the attacker’s foot with our hand and hold it trapped on the ground. In addition, we press with the shin of our blocking leg against the shin of the aggressor’s kicking leg, which can also bring the attacker out of balance if executed correctly. From this position we kick with the other leg and the heel of our foot hard into the attacker’s abdomen. In addition to the kick effect, we push the opponent’s hip area backwards, which in turn influences balance.

The ground technique according to Michael Janich

After many experiments (and bruises) my preferred technique is to lie with my back on the ground, bend my left leg and support my left foot flat on the ground. I pull my right leg into a "ready-to-shot" position and turn the toes of my right foot outwards in order to be able to kick with a larger surface with a reduced risk of slipping off the target. The preferred targets are the shins and knees of my opponents. To protect my head, I perform a light "crunch" to lift it off the dangerous floor and place my hands around my head to form a "helmet" with my forearms and elbows. From this position I can fire fast, hard kicks towards the aggressors’ shins and knees to keep them away from me. You should not perform high kicks, because this would allow the attacker to get closer to us and make it easier to divert or grab our foot. If the opponent tries to overcome our foot defense by circling, we can perform fast turns with our body with our left foot firmly placed on the ground. This works even faster and easier than if we support the turns with our hands - they stay where they belong to protect our head. If the attacker kicks quickly and hard, we use our feet to kick the tibia of our opponent’s foot as soon as it is in range. Not just block it, but kick it! This is immediately followed by a kick against the knee or the inside of the ankle joint of his standing leg as powerfully as possible. If the attacker kicks more slowly or uses a very wide swing-out movement before kicking, don’t wait, but fire a kick directly against the knee or the ankle of the opponent’s supporting leg. 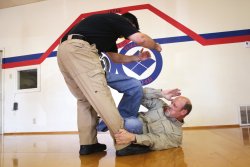 Michael Janich
From this position we kick with the other leg and the heel of our foot hard into the attacker’s abdomen. In addition to the kick effect, we push the opponent’s hip area backwards, which in turn influences balance.

Either the attacker goes to the ground flat on his back and possibly breaks his coccyx, or our kick into the groin area forces the attacker to bend his upper body and head, which would then be the goal of our next and probably final step. If the attacker goes to the ground, we use this to get ourselves up. Either we flee now or – should danger still emanate from the attacker – end the confrontation with a stomping kick on the aggressor’s ankle. Of course you should study these ground fighting techniques in order to be able to use them quickly and effectively in case of a fall. You should be able to quickly take up the defensive frame on both sides and, with a sparring partner, you should above all practise rolling towards the kick in order to dampen its effect, or the foot trap with which we nail the aggressor. But once you have internalized the principles, you can survive a street fight even in the weak position on the ground.

You can read the previous parts of our series here: