Already in the fifth part of our series we dealt with the use of improvised weapons such as a flashlight. Here it should be clear that we increase our effectiveness and thus the degree of our defense by these means. That's good, especially since one must assume that an attacker could also be armed. The perfect weapon is the one that can be used effectively against a wide range of attacks, is easy and comfortable to wield and, above all, is legal – wherever you live or travel. On closer examination of these requirements, it becomes clear that they are not met by many types of weapons – be it the handgun, the knife or the OC spray. Especially if you take strongly regulated places into account. One of the few weapons that meets all these criteria is the walking stick, or cane. Throughout history it has been a fashionable accessory in many cultures, as well as a means of defense. In modern life, however, it is primarily seen as a mobility aid for the infirm and injured. This image of the walking stick as well as the fact that it can of course be used without medical necessity, make it the ultimate "politically correct" defensive tool. Especially if you know how to deal with it. In addition, we are evolving from a person who decides to use a walking stick to an elderly person who may need a walking stick. The more our physical strength fades, the simpler and more efficient our defense tactics must be.

Most of the "self-defense systems" with stick that are taught today are often too complicated and physically too tiring, so that they can hardly be described as really "practical" – especially if you are dependent on a stick as a mobility aid. For this reason, I have developed the "Martial Cane Concepts" (MCC), a stick defense system that can be learned with minimal training and internalized with little regular practice and recalled in an emergency. Building on this foundation, the system is also so versatile that physically more powerful individuals can apply a higher technical level if required. If the physical possibilities are reduced at an advanced age, the tactics can be adapted accordingly with a stick. 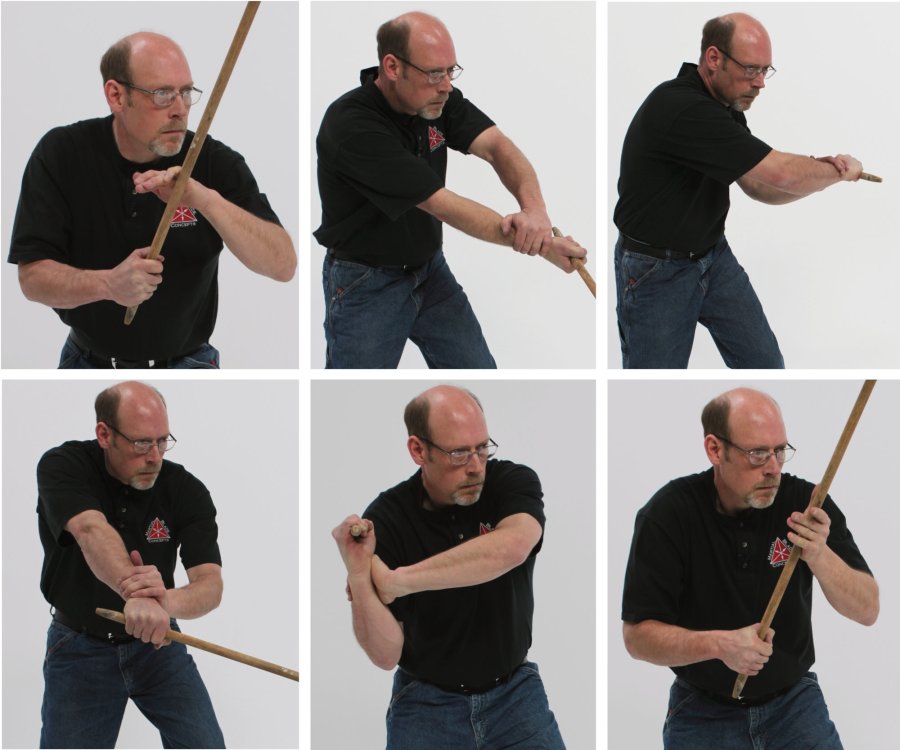 The walking stick - more than just a support

Our starting and guard position comes from the Philippine stick martial art "Eskrima" by Heyrosa De Cuerdas. If you are right-handed, place your left foot forward so that you stand shoulder-wide with your feet slightly offset. Grasp the stick with a natural fist posture in the rear grip area and lift the tip of the stick in front of your body. With the left palm of your hand grasp the stick in the upper third, with the thumb and all four fingers positioned on the stick from above. Keep the elbow of your right arm close to you body so that the right hand is close to your hip and the tip of the stick is placed in front of your face at eye level. In this guard position, the stick functions as a shield against possible attacks and is also perfectly positioned to strike back for quick counter-attacks.

The basic sequence with the stick

The core of the system is a basic sequence of 6 movements. Starting with the described guard position, the movement sequence looks as follows:

Use of the walking stick in case of emergency

Imagine, for example, an attacker trying to hit us on the head with a stick, pipe or similar object. From the guard position we turn towards the direction of the attack and open our left hand so that only the palm of our hand touches our walking stick. This reinforced position and the mass of the walking stick function as a shield with which you can also intercept even powerful blows. Once the aggressor's weapon has been blocked, we return to the central starting position and continue our rehearsed MCC basic motion sequence with the stick. With your left hand leading it, the stick is pushed down so that it moves lengthwise down the attacker's weapon and will painfully hit the opponent's hand. This movement may disarm the attacker or at least cause the attacker's hand and weapon to be lowered. In addition, the aggressor will most likely bend the upper body forward. If so, we perform the second movement of our standard defense: the stick is strongly pushed forward with both hands at a slightly upward angle. This is aimed at the solar plexus, sternum, throat or face. The effect of this thrust should cause the opponent to stagger backwards, which in turn opens up the possibility for us to complete our defensive sequence as efficiently as possible with a full-force blow in the direction of the knee, shinbone or ankle. Such a "low blow" is a key element in the MCC system and a true "mobility killer". It destroys the possibility of standing upright, fighting and possibly of pursuing by the aggressor when you start your own escape. This is all the more crucial if you actually need the stick as a walking aid. Furthermore, the low blow is much harder to block and the mentioned targets, especially the shin, offer a large target area and therefore a high probability of being hit. If the attacker succeeds in escaping the first strike, the quickly executed backhand shot from our MCC basic sequence follows. Because it is always good to have a Plan B ready.