Self-defense and unarmed defense - Part 2: efficiency and the "stranglehold" attack

In the first part of our series Michael Janich taught the basics of self-defense and the defense against the "swing". In this second installment the US close combat expert deals with the efficiency of defensive measures and shows how you can successfully defend yourself against a strangle attack.

In the first part we dealt with the swing or long sideways hook and how to defend against it. Now we’ll take a look at the defensive techniques against a two-handed stranglehold . One of the most frequently asked questions when it comes to self-defense is: "What can I do if a much bigger and stronger person attacks me?” The honest answer, which by the way is valid for every self-defense situation, can only be: "Do the best you can!". The harder you train and the better your physical fitness is, the more likely you are to be able to compensate for differences in body size and strength. However, another important element to make your defense techniques as effective as possible is to ensure that your own body structure is used as efficiently as possible . Structure in this context is basically the alignment and coordination of the bones of the skeleton of your body when you perform a particular movement.

What counts in unarmed defense: structure instead of force

If your bones and joints are aligned correctly, you will use less force and still be effective because more energy can be transferred from the center of the body, usually by turning your hips and shoulders. To better understand this concept, imagine doing a simple push-up. In the starting position, the arms are fully extended and locked in the elbow area. This alignment of bones and joints makes it possible to easily maintain body weight over a longer period of time. Now loosen your elbows, shift your body a few centimeters lower and hold the position. With the main support of muscles instead of bone alignment, your structure will not be nearly as strong and you will tire after a short time. As simple as this concept may seem, it is often neglected in martial arts and self-defense systems. If you consider and maximize your structural body alignment in training, then your self-defense techniques will be far more powerful. You will also condition yourself to "fight smarter instead of harder", making your tactics more functional and efficient. 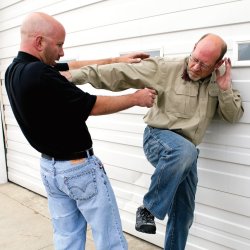 Michael Janich
The continuing shoulder rotation also frees the hips, allowing you to pull up the knee to deliver a powerful stomping side kick.

The defense against a stranglehold - methods

This concept is explained by way of example against a common, dangerous attack in the form of a two-handed stranglehold. The aggressor grabs your neck with both hands and squeezes to block the air supply. In the worst case, you will also be pushed against a wall to limit your mobility and escape possibilities.

In many martial arts and self-defense systems, attempts are made to counter by acting against the attacker's hands in order to free yourself from the stranglehold as quickly as possible. Some recommend grabbing one or more fingers of your opponent's hand and bending them back to loosen the grip. Others, on the other hand, use a lever or wristlock on the opponent's wrist to mediate a defensive measure. If these tactics work for an equal opponent, they are unlikely to be effective against a larger, stronger opponent.

The most effective way to escape the attacker 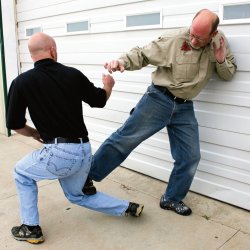 Michael Janich
The kick against the attacker’s knee or ankle joint destroys the aggressor’s mobility and gives you a safe escape option.

Because the attacker has both hands around your neck, you know exactly where they are - leave them there. Extend and lock the fingers of your strong hand and stretch your arm to drive the fingertips into the "jugular notch" – the hollow area in the neck above the sternum and below the larynx – of your opponent. Lock your elbow to create a strong structure and, using the wall as a support, rotate your shoulder to extend your arm forwards as powerfully as possible. Even if the attacker is very strong and/or has long arms, the combined force of your rigidly locked arm and the extended range offered by your extended fingertips along with the rotation of your shoulders will drive your fingers deep into the aggressor’s neck. This leads to intense pain and disrupts breathing. This forces the attacker backwards disrupting the stranglehold. Because a stranglehold can generally be qualified as potentially life-threatening , you want to make sure that you can get away safely. After all, the ultimate goal of self-defense is to escape safely. Continuing the rotation movement allows your hips to turn as well to deliver a powerful stomping side kick against the attacker’s knee or ankle as a finale, which limits the aggressor’s mobility and gives you an escape option. The best self-defense techniques take into account and are based on our natural anatomy and body structure rather than pure strength, which increases the chances of success in defending a physically superior attacker.

all4shooters.com already covered the basics of self-defense and the defense against the "Swing" in part 1.

Subscribe to the Newsletter
This article is also available in this language:
DEIT
Click here for more information on the topics:
CulturePersonal DefenseTechnics
That might interest you too: