Self-defense and unarmed defense - Part 1: introduction and the "swing”


The American Michael Janich is an internationally recognized expert for unarmed and armed self-defense at close range. Exclusively for all4shooters, the martial artist and instructor will reveal tips and tricks for self-protection in a 15-part series.

Welcome to the first installment of our series about self-defense. The aim of the series is to teach simple and realistic defense techniques that you can include in your training program. In addition, we want to explain the key elements of practical self-defense as well as the differences to martial arts in order to improve your overall preparation and self-defense readiness.


True self-defense is simple, direct and effective! Therefore, good self-defense techniques should have certain fundamental qualities in common that allow the user to perform them with ease and spontaneity even under the stress of a real attack.

Self-defense: good defense techniques should have the following qualities... 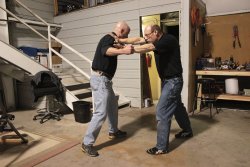 Michael Janich
As soon as the attacked person realizes the attempt of the swinger, he counteracts with a "shoulder stop". In this powerful technique, which is performed simultaneously with both hands, the palm of the right hand hits the shoulder while the left hand is positioned near the elbow/forearm. This resistance is very instinctive, easy to learn and will stop even a very powerful swing with ease. 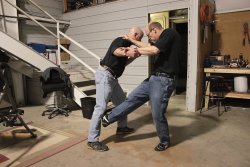 Michael Janich
In a flowing motion the defender executes a sharp right kick against the shin of the aggressor. The simple, direct kick is performed as when playing football. Simply swing the leg vigorously and kick the opponent's shin with the inside of the foot. 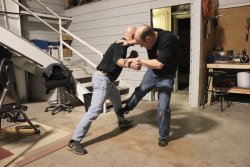 Michael Janich
The hard kick against the shin will cause the attacker to take this leg back and shift his body weight to the other leg. The attack ends with a stomping side kick against the ankle of the other leg, which is now under weight. This should destroy the upright posture of the opponent and create the possibility to take flight.

It is therefore better to focus on defense techniques that are effective and functional against a wide range of attacks.   Example: if an aggressor fires a swing (boxing hook), a high, vertical blow with a stick or a stabbing movement with a knife, the body mechanics and movement sequences are more or less identical. Rather than seeing and treating them as three different attacks, each with a different resistance reaction, it is better to perceive the consistent elements of the attacks and recognize that different attacks can be successfully fended off with one and the same technique.

With these principles of effective self-defense in mind, the first part of this series is dealing with one of the most common attacks on the street: the right swing or hook, the defense against which we show you in the pictures in this article.

Subscribe to the Newsletter
This article is also available in this language:
DEIT
Click here for more information on the topics:
CulturePersonal DefenseTactical
That might interest you too: