In the first and second part of the series, basic considerations and the defense against two concrete attack scenarios were conveyed. In the third part, Michael Janich discusses how important having an emergency plan is. He teaches a universal standard sequence of defense actions.

In the first and second installments, we dealt with the defense against a “swing” and a two-handed stranglehold. Part 3 is simply about "having a plan and implementing it in case of emergency".

Universal instead of specific - an advantage in self-defense

Many traditional martial arts and self-defense systems teach special defense techniques for specific attacks. The problem with this method is that it basically requires that you first identify the type of attack correctly and then choose the right defense from a variety of options to ultimately apply the appropriate technique lightning fast before you can be injured. It takes years of intensive practical training to respond to an unpredictable, sudden attack with lightning speed. A simpler approach is to have a general contingency plan that is consistently implemented. Instead of having to master countless defense techniques, the idea is to study a single, basic "standard sequence" of blows and kicks, which also includes many useful body mechanics and is therefore particularly effective. No matter which attack you are exposed to, you always counter it with the same – but still very versatile –  defense system for an effective self-protection.

The standard sequence for defense against attacks

The basic sequence I teach is based on the fact that most people are right-handed and can therefore instinctively hit harder and more efficiently with their right hand (this works mirror-inverted for left-handed people). We start with a guard position with the left foot pointing forward and extend the left palm in a straight line to the front (like a classic "jab", i.e. the abrupt straight punch with the leading hand in boxing). This is followed by another palm strike with the right and left hands and a horizontal right-side elbow strike. The rotation of the hips, which lends strength to the elbow blow, is immediately further exploited in order to finish in a fluid movement with a blow with the right knee. Don’t pull in the knee too much, but rather make a knee stomp forward with the strength of the whole body.

Physiological potential to deceive the attacker

In order to better understand the different applications of our standard defense sequence, let us explore the "physiological potential" of the movement sequences . An example is the initial movement of the left palm thrust. This can act as a feint to divert the attention of the opponent from the actual, powerful blow with the right hand. When executed as a "jab" you can also land a slight face hit and also limit the visual view of the aggressor in a deceptive maneuver, which increases the chances of being successful with your right hand. The best thing about it is that you can find the right distance to the opponent with the left-sided blow or push and therefore you can deliver a precise blow with your right hand. But the starting movement of the left palm thrust can also be used more defensively as a stopper to parry and redirect a thrust by the opponent - for example, under your arm into the armpit area, where the aggressor’s arm can be trapped and controlled. The next movement, in the form of a right palm strike, is not carried out in a straight line like a "jab", but should be executed like serving in volleyball or like a "hammerfist", with a downward movement.

Michael Janich
Here the fundamental, extremely versatile basic defense against a right side hook or swing is shown. The left arm effectively deflects the blow, the right palm thrust blocks the other hand and the next movement controls both aggressor’s arms with the left arm.

Since the aggressor is in an upright position, this hammer blow transmits more energy to the target, especially as it is more consistent and effective under stress in terms of "gross motor skills". In addition, by targeting the nose, ear, cheekbone, neck or collarbone, the risk of hitting the opponent's teeth with the hand is reduced. This is not a matter to be underestimated in today's world. Because the last thing you want is to emerge from a street fight as a "winner" and die years later from an infection because the teeth of the sick attacker could injure our skin and transmit the disease. The falling, elliptical movement of the hammer blow or punch can also be executed better and faster as a form of "continous fire", for example to overcome the successful defensive block by the aggressor and thus to create space for the horizontal elbow blow. All other motions of our standard defense sequence have multiple offensive and defensive functions and possibilities, too. The speed of the sequence (with possible repetitions or delays of movements) can and should be adapted to the respective situation and the reactions of the opponent. 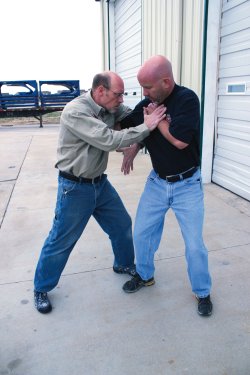 Michael Janich
The aggressor under control.

The versatility of standard defense: an example

In the other parts of the series we will look at how we can use our standard defense sequence against other attack tactics – i.e., how we put our versatile contingency plan into action.

all4shooters.com already covered the following techniques in this series: