Pistol caliber carbines are very popular: easy to handle, versatile, low maintenance. Most of these guns come in the equally popular AR design. Yet some manufacturers takes a slightly different approach, like the Nova Modul RAK 9 Sport featuring an unmistakable Kalashnikov design. We took a closer look at the sporty 9x19 pistol caliber carbine.

The current boom of 9x19 pistol caliber carbines is based on several factors: there are many more shooting ranges where such guns can be used, there are varied dynamic shooting sport disciplines for pistol caliber carbines, and they are inexpensive in terms of use (ammunition costs) and maintenance. Finally, the entire logistics for the shooter are simplified by the fact that if you already own a 9 mm Luger pistol you can fire the same ammunition from two different types of guns. 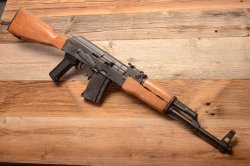 Michael Fischer, © caliber
This is what the Nova Modul RAK 9 Sport looks like in its standard version with classic AK wood furniture.

The gun comes factory with a wood stock and handguard. We received our Nova Modul RAK 9 pistol carbine in 9x19 converted with high-quality, practical plastic furniture from the popular US manufacturer Magpul Industries Corp. directly from Waffen Schumacher, a German wholesale company. According to Waffen Schumacher, this Sport version is only available from third parties and in Germany you can buy it completely finished at MGBstrategic for a fair price of around 1350 euro – price may vary in your country, anyway.

(The RAK 9 standard version with a classic AK wooden set costs around 949 euro and the Magpul tuning components cost a total of 327 euro). 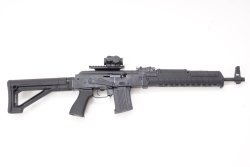 Michael Fischer, © caliber
The 3.9 kg sports version of the Nova Modul RAK 9 owes its appearance to the conversion with the predominant use of Magpul tuning components.

The AK-based action of the RAK 9 has been redesigned for the reliable use of the 9mm Luger pistol cartridge. The gun uses a simple blowback system and doesn't feature the positive-locking "long-stroke" gas operated system with gas piston and 2-lug rotating bolt head. The modified main components (frame/receiver) with a filler piece in combination with the specially developed magazine ensure a shorter bolt travel when cycling as well as when feeding, and thus a perfect functioning. Due to the external compatibility with the original AK system, all typical add-on accessories of the AK platform can be used without any problems. The receiver is equipped on the left side with a mounting rail for target optics, so that we mounted a Falke S red dot sight with a UTG side mount.

However, the high trigger weight of a whopping 139 oz/3900 g alone does not exactly make accurate "hole punching" easy. On the other hand, you don't necessarily need top accuracy for dynamic disciplines and the RAK 9 impressed with its AK-typical functional reliability. In addition, the carbine is much cheaper to buy than AR-based carbines. Apart from that, we had a lot of fun with this "exotic" pistol cartridge carbine.

We took a look at the latest AR-15 semi-automatic rifles from Schmeisser.

Subscribe to the Newsletter
This article is also available in this language:
DEIT
Click here for more information on the topics:
RiflesMagpul Industries9 mm9x19 mm (9 Luger)AR-15Sporting rifles
That might interest you too: 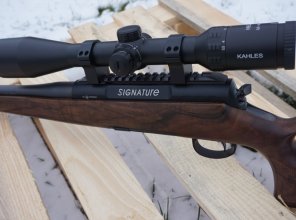 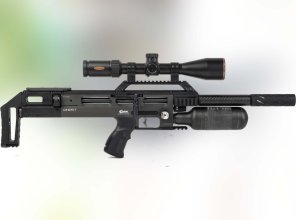 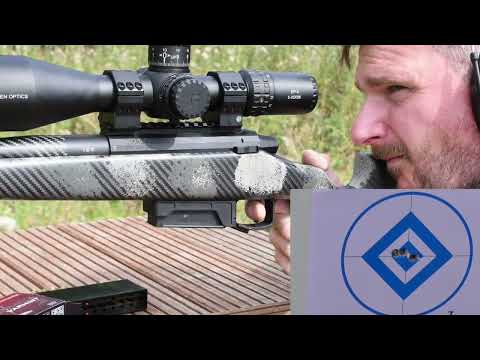