At the end of January, Heckler & Koch invited a group of journalists to their factory in Oberndorf. Over the course of the last few months, Heckler & Koch has been the target of several prejudiced reports in TV and newspapers.

After all these attacks have been flying hot, Heckler & Koch decided for an approach of transparency and public accounting - a chance for us to get an in-depth look at them.

As an “added bonus”, the new assault rifle HK 417k A2 was presented to the press. This is really everything our readers can expect, thus feel free to read on

The German manufacturer of firearms, HECKLER & KOCH, has been receiving a lot of bad press lately, especially thanks to anti-gun journalists looking for an “easy target”. A good representation of this behavior is a documentary recently aired on ARTE, where a TV crew appeared unannounced at the main gate and requested access. They were rightfully turned down and referred to the public relations department but the scene was used in the documentary to discredit HECKLER &  KOCH.

To show that the obliqueness and conspiracies surrounding the factory and its products are just a myth, HECKLER &  KOCH invited journalists to join them for a tour of the facilities on 1/29 and 1/30/2014.

In the morning hours of the first day, all invited guests were welcomed by the HECKLER & KOCH management. After a brief company presentation, a Q&A session and some presentations on the current arms market, we were given the opportunity to tour the factory.

During the tour, it was confirmed that HECKELR & KOCH is capable of handling most of the manufacturing process in-house. Just a few specialized steps, such as anodizing of aluminum parts, are outsourced. While this may sound weird, in-house processing is often more cost-effective than sending it out. This is mainly due to the extensive, modern machine park available to H&K. A great example for this is the carrier of the 416/417 series rifles. Usually, it would have to be mounted differently three to four times to accomplish all machining tasks while the automated milling apparatus H&K uses is capable of performing all the tasks without having to externally adjust or re-mount the part.

Another aspect of manufacturing for the military is the necessary certification. NATO guidelines currently require redundancy in manufacturing lines, including separate machines and die-cast forms. Only a handful of companies, among them H&K, are able to fulfill this standard. 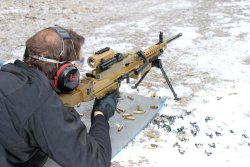 The product presentation followed this informative tour. The newest assault rifles HK416 A5, HK417A2 and G36kA4 with their organic 40mm launcher GLM A1, the G28 with the so-called „Ergänzungssatz Patrouille“, a 2 kg weight-saving mod for long range patrols that can be applied by the end-user, and the MG5 (formerly known as HK 121) were shown and explained. Following the initial presentation, experts from HECKELR & KOCH were happy to answer all of our questions for the better part of an hour.

The next morning saw us bright-eyed and bushy-tailed for the live fire product presentation on HECKELR & KOCHs experimental range.

The first firearms to be tested were the machineguns MG3, 4 and 5. The light machinegun MG4 has been introduced with the German Bundeswehr a while ago. The MG5 is designed replace the aging MG3 currently in service and to supplement the MG4 by providing larger caliber (7.62x51) fire while retaining all the design elements of the MG4. Thus any recruit familiar with the MG4 should be able to handle the MG5 with ease. Additional design features include a reduced rate of fire to conserve ammo and improve accuracy as well as an ergonomic design. The barrel change is quicker than on the predecessor and does not require handling the barrel itself anymore, thus avoiding burns.

After having a go on the machineguns, the next step in our product evaluation were the 40mm grenade systems: among them the GWM “Granat Maschinen Waffe” a belt-fed automatic support weapon and the GML, a standalone or attached single shot launcher.

The GML A1 in the standalone variant is quite fun to shoot and after a few test shots, everyone managed to hit targets at 100m. Integrating the standalone variant of the GML A1 to a firearm is easy. It is designed to work in conjunction with the novel G36 handguard so that it can be adapted to the HK416A5, HK417A2 or G36 without the need for an extra adaptor. All that needs to be done is taking off the shoulder stock from the standalone version, sliding the GML A1 onto the lower rail of the rifle and securing it with a cross bolt.

There just “happened” to be a HK417 A2 sitting around waiting for us to perform this conversion. Interestingly, the short-barreled HK417A2, developed for the “G27k” concept of the German Army Special Forces, just entered production. Having hands-on experience with this 7.62x51 rifle and its organic grenade launcher was a world premiere.

Moving on to the bigger guns: test-firing the GMW has been a blast. Unfortunately the lane was a little short for this 40 mm support weapon. With its effective range of over 2 km the paper targets at 200 m were hardly a challenge.

The product presentation further included the handguns P30, P8 and HK45 as well as the sub-machinegun MP7 and the 416 A5, G36, 417K and G28 rifles. All the long guns were prepared for mounting a suppressor.

The first impressions from the range were positive. Especially the P30 and HK45 were able to convince the testers. The polymer-frame reduces weight while the gun design keeps muzzle climb to a minimum.

Among the rifles, the G28 patrol version stuck out. The standard G28 with its 7.5 kg weight is an accurate but somewhat heavy weapon more suited to stationary employment than mobile warfare. The patrol mod, consisting of a few user-swappable parts, reduces total weight to 5.5 kg and makes the G28 a much easier wieldable firearm. Since both variants are supremely accurate on the 600 m range, it remains unclear why the patrol mod was not fielded earlier by the military. Another notable innovation is the 416 A5 Frame. It has been modified for ambidextrous use and now accepts STANAG compatible AR15/M16 magazines.

The other rifles have been tested both, on the range and in the field by more competent people than me. All we can say is that they performed flawlessly under the conditions present on HECKELR & KOCHS’s firing range and that we had a blast trying them out.

A few concluding words: During the whole visit, HECKLER & KOCH has been very forthcoming. They really made a step towards transparency and openness. The author would wish that more journalists from the mainstream media would have made it to this presentation and convinced themselves that there are no fairies or trolls in the factory.

All4shooters.com will not elaborate much on the political and criminal charges brought forth against HECKLER & KOCH by the press. I just wish to note that getting approval for export is a complicated process and involves permits and checks by several agencies, including customs. Claiming that H&K managed to clandestinely export firearms to third countries implies that they had aid from criminal elements within several federal agencies, a train of thought no one really wants to follow.

There is no conflict of interests to declare. HECKLER & KOCH paid for food and moderate lodging, travel charges were the responsibility of every participant.