FN Five-seveN Mk3 MRD – the 5.7x28 pistol gets a new design and ergonomics

FN introduces a fully-redesigned version of its Five-seveN semi-automatic pistol with all the thrills and frills of most modern handguns for military/law enforcement use. An optics-ready slide and a pistol grip with multi-surfaced texture are some of the improvements offered by the new Mk3 MRD.

A contribution from Piergiorgio Molinari06/08/2022

It was the first – and for a long time, the only – pistol designed for 5.7x28 mm ammunition. 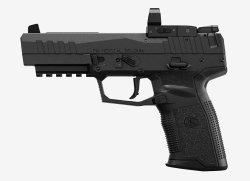 Among the features of the FN Five-seveN Mk3 MRD, a new optics-ready slide and a multi-surfaced texture for the grip.

At Eurosatory, Paris, from 13 to 17 June 2022, FN Herstal is going to introduce a totally redesigned Five-seveN pistol, named Mk3 MRD.

The Five-seveN pistol was developed in the late 1990s as a companion for the then innovative P90 SMG in the same caliber.

For many years the 57x28 mm cartridge could only be fired in those two FN firearms.

Now, with other manufacturers such as Ruger, Palmetto State Armory and Diamondback Firearms finally joining the 5.7 bandwagon, FN decided to revamp its handgun.

The enhancements and improvements were long overdue for a pistol whose ambition is to compete in the military and law enforcement market of modern polymer guns. The “new”  Five-seveN Mk3 MRD now has a fully revisited design in line with the latest FN products – the FN 509 series in particular – with a more squared slide, aggressive and spaced front/rear serrations for easier cocking and press check, a more angular trigger guard and a multi-surfaced texture for the grip, to improve shooting control and comfort. 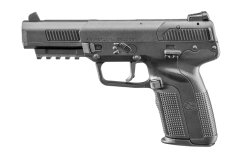 Most importantly, in the new configuration the Five-seveN features an optics ready slide, compatible with most commonly used mini red dot sights.

Mechanically, there are no differences compared to the previous Five-seveN, which means that it is a semi-automatic delayed blowback pistol with a concealed hammer. Magazine capacity is still 20 rounds, just like in the old configuration. Barrel length is the same too, at 4.8"/122 mm.

The revamped Five-seveN is available in black or flat dark earth (FDE). 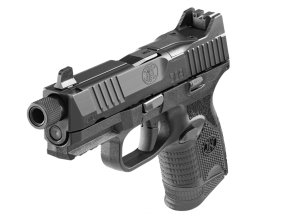