The Glock 17 Gen.4 pistol has been adopted as the new unified service sidearm for the British Armed Forces 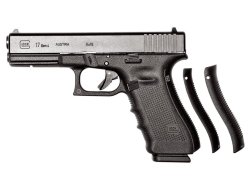 Glock, Ges.m.b.H.
The Glock 17 Gen.4 semi-automatic pistol will replace the L9A1 and other stopgap handguns in service with the U.K. Armed Forces

The Austrian manufacturing firm of Glock Ges.MbH. scores another hit and confirms itself as the leader maker of handguns for military and law enforcement in the world, as last January 31st, the Ministry of Defence of the United Kingdom announced to have awarded Glock with a contract to provide the GLOCK 17 Gen.4 semi-automatic 9x19mm-caliber pistol to the entirety of the British Armed Forces, to use the GLOCK 17 Gen4 pistol for its personnel. The first batch, counting up to 25,000 pistols, is expected to be delivered within the end of March 2013, with troops deployed in Afghanistan slated to be the first to be equipped with the newly-adopted pistol. The Glock 17 Gen.4 will eventually replace the previously-issued pistols within the British Army, the Royal Navy, the Royal Marines and the Royal Air Force, with the end of procurement slated for 2014. 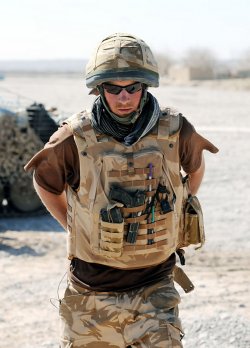 U.K. MoD
The Browning High-Power pistol, hereby carried by Prince Harry, has been the standard sidearm for the British Armed Forces for over 40 years

Warrant Officer Class 1 Mark Anderson, Royal Marines, who conducted a trial of the new weapon before the contract was awarded, enthused, “Pistols are vital in close combat and are a key part of a soldier’s armory. Reliable, light and easy to carry, the Glock inspires confidence and performs exceptionally well.”

“After extensive and intense tests and evaluations, Glock is pleased to be selected by the MoD,” stated Josh Dorsey, Vice President of GLOCK Inc., the company's north-american Branch. “The deciding factors were the GLOCK’s higher magazine capacity, the superior accuracy, the ease of use and maintenance and the reliability. The Glock SAFE Action System also enables the pistol to spring into action faster.”

The selection process for replacing the Ministry’s previous guns was stringent. The trials for eight of the leading pistol manufacturers in 2011 consisted of a human factors integration test, nine months of scientific evaluation and a coinciding nine months of environmental trials under different climatic conditions. Ultimately, Glock proved the best fit for the MoD, and contracts were signed in 2012. 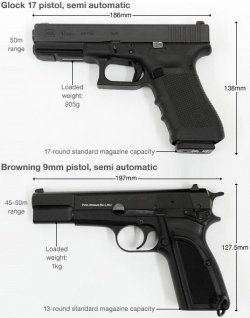 The Glock 17 Gen.4 supersedes the venerable Browning High-Power 9x19mm single-action semi-automatic pistol, adopted by the British Armed Forces in the second half of the 20th Century as the L9-A1 in replacement of Webley and Enfield revolvers, and kept in service ever since. Glock pistols aren't exactly new to British service, though: they have been in use for years with Special Forces personnel, including the 22nd Regiment S.A.S. and the Special Boad Squadron, sometimes along with the L105-A1, this being the SIG-Sauer P-226 pistol, procured as a stop-gap for the troops deployed in Afghanistan.

Adoption of the Glock comes in a moment of true revolution of the British arsenals. Recently the MoD Police adopted the Heckler & Koch MP7-A1 sub-machinegun to equip its personnel, in replacement of all previously-issued firearms; and projects are underway to find a replacement for the lackluster SA-80 bull-pup 5.56x45mm individual weapon system, with viable candidates including the Heckler & Koch G-36 and the Beretta ARX-160.