The NSSF, or National Shooting Sports Foundation, is America's trade association for the firearms, ammunition, hunting and shooting sports industry. It is the true heart of many educational, instructive and PR initiatives that the world of guns, hunting, sports shooting, self-defense and pretty much everything related holds yearly in the United States of America in order to dissolve the cloud of lies relentlessly propagated by the front of the anti-gun politicians, media and associations. It is the organizer of the SHOT Show, the world's most important trade show for civilian-grade arms, ammunition and accessories. And, it is headquartered in Newtown, Connecticut − the same town where the madman Adam Lanza killed 27 and injuried 2 at the Sandy Hook Elementary School, last December 14th. 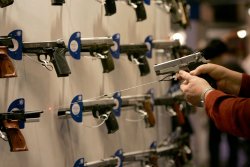 The Newsweek/Daily Beast Company LLC
Ever since American politicians jumped back on the "let's talk about gun control" bandwagon, gun sales saw a sharp rise

As such, the NSSF has been directly touched by the shooting, and has ever since offered support to the victims and their families, campaigned for protection of school properties through armed guards and teachers, and has effectively fought the anti-gun crowd, whose insane proposals, if passed, would have made America all but a safe place for schoolchildren, as they would have deprived their parents or guardians of most effective means to protect them. Plus, as usual the NSSF has been monitoring the market, and witnessing the sharp rise of gun sales that followed the Sandy Hook school shooting, in the wake of the fears for a ban that were caused by the above-mentioned, failed gun control proposals. The NSSF thus commessioned InfoManiacs.com a study to help determine the motivations for the first firearm purchase and how these firearms are being used. The online research was conducted between March and April 2013, and involved consumers aged 22 to 65 who bought their first firearm during 2012.

The Huffington Post
Most of new, first-time gun buyers were aimed towards personal and home-defense firearms

Some of the key findings of the study demonstrate that first-time gun buyers are largely active in one or more shooting activities and that women are motivated to purchase their first firearm predominately for personal defense. As a matter of fact, the majority of first-time buyers (60.3 percent) tend to be active, using their gun once per month or more, with one in five reporting usage of once a week or more.

First-time gun owners who have participated in hunting (53.2 percent), practical pistol shooting (46.3 percent), clay-target sports (44.0 percent) and gun collecting (42.4 percent) said they want to increase their participation in these activities. 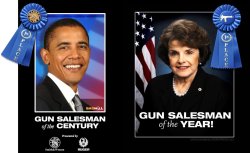 all4shooters.com
The failure of gun control attempts in the U.S. at Federal level and the contextual sharp rise in gun sales have prompted a wave of mocking on the Internet

The top-ranking factors driving first-time gun purchases are home defense (87.3 percent), self-defense (76.5 percent) and the desire to share shooting activities with family and friends (73.2 percent). Women, in particular, are highly focused on personal defense and self-sufficiency.

Older first-time buyers--the 55 to 65 age group--indicated concern that firearms may no longer be available to them was one of many reasons for their purchase.

Most first-time buyers purchased their guns through local gun shops (43.6 percent) and mass retailers such as Walmart and Cabela's (33.6 percent). First-time gun buyers spent an average of $515 for their first gun and nearly as much as for accessories ($504). Nearly a quarter of first-time buyers bought at least one more firearm within the first year after their first purchase spending more, on average, on the later purchase.

As a matter of fact, it all sounds like the American people has no intention whatsoever to bend to the senseless gun control blabber that's stubbornly refusing to die off, killed by its own idiocy. Further information can be accessed by reading the research itself, which is available only to NSSF members on the Foundation's website. If you are curious to know more, go ahead and give it a look. And, if you're not an NSSF member, well... this may be just the right occasion to consider spending a couple of dollars, even if you are not an American or if you don't live in the United States, and to support a Foundation that protects the gun rights of the American people, which is utterly important for the rest of the world: if gun rights fall in America, other Countries will follow!