There's no hotter theme in the United States, nowadays, than the Second Amendment of the U.S. Constitutions, and the protection of the rights thereof. The Second Amendment is considered sacred by many and hated by many others, and the tension between supporters of the Right to Keep and Bear Arms and the proposers of Gun Control measures is so hot − mostly due to some dirty political tricks that the anti-guns lobby played during the years against law-abiding American citizens − that voices standing out on both sides, upholding even slightly different positions from the mainstream, can easily be pointed out as "traitors".

There's no better example for that than what happened in the past days to Dick Metcalf, a long-standing editor for GUNS & AMMO, the world's most read gun magazine. 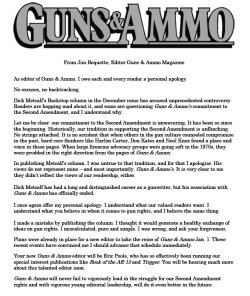 Guns & Ammo
This is the column with which Jim Bequette, editor-in-chief for GUNS & AMMO, publicly announced the dismissal of Dick Metcalf

Dick Metcalf has been running a column on the magazine − "The Backstop" − for years now; with Metcalf being widely acknowledged as one of the biggest experts worldwide in all things gun-related, "The Backstop" was a true mainstay on Guns & Ammo until the last issue − December 2013 − where Metcalf's column, titled "Let's talk limits", discussed possible limitations of the 2nd Amendment rights and up to what extent said limitations may be actually considered "infringments", Constitutionally-wise.

Taking some restrictions to the 1st Amendment rights − freedom of speech − as an example ("You can not falsely and deliberately shout 'Fire!' in a crowded theatre"), Metcalfe argued that the 16-hours course required by the State of Illinois to grant the recently-instated concealed carry license may not be a true "infringment" at all.

The column was met by a wave of protests, with readers and 2nd Amendment supporters America-wide accusing Metcalfe to have somewhat "betrayed" the RKBA and being supporting gun control from the pages of a gun magazine. On November 6th, Guns & Ammo editor-in-chief Jim Bequette published an official letter in which he apologized with the readers and with American gun owners as a whole, announcing that Dick Metcalf had been fired from his long-standing position as an editor for the magazine due to the contents of his column. Two days later, Bequette himself resigned from his position as the editor-in-chief for Guns & Ammo.

The controversy over Metcalf's column is still hot, while Guns & Ammo, having lost two prime figures, may struggle in the near future to keep up with the competition from FMG Publications, another huge gun-related American publishing house, publishing highly regarded magazines such as American Handgunner and GUNS Magazine.

As you all know by now, here at ALL4SHOOTERS.COM we are staunch supporters of the right of law-abiding citizens worldwide to keep and bear arms, and we totally support the struggle of the Second Amendment supporters in the United States. But we're also journalists, and it's our duty to report news with as little personal or political commentary as possible; plus, we're based in Europe − in Italy, more specifically − and we are well aware that cultural differences between Europe and America concerning guns, gun ownership and gun rights may lead to even more misunderstandings and controversy. This is why we decided to take no position in the matter.

Nonetheless, this seems to be quite an accurate gauge of how hot is the debate concerning the Second Amendment of the Constitution of the United States, and the Right to Keep and Bear Arms, even now, almost a year after the Sandy Hook Elementary School shooting and months after gun control proposals failed in Congress.