Voere launches the Victor 3, a new bolt-action rifle compatible with Remington 700 Short Action stocks and triggers. The modular design allows for quick barrel or caliber changes. We at all4shooters.com took a close look at the Voere Victor 3 with two barrels and the H7 stock from Hera Arms at 100 and 300 yards. This modular system is suitable for hunting and sport shooting – depending on the configuration.

A contribution from Christopher Hocke05/04/2022

With the 3 kg, 602-millimeter long match barrel, the balance of the Voere V3 changes in such a way that one prefers to shoot benchrest-style.

For the user, this results in a multitude of individual adaptation options: to the shooter himself/herself, to the intended use, and ultimately also with regard to budget. Compared to the aforementioned models, which are all based on a larger action and thus also on larger calibers up to .50 BMG in some cases, the Victor 3 is designed as a significantly more compact platform. The new Voere is compatible with the Remington 700's Short-Action and thus intended for smaller centerfire calibers up to the .308 Winchester and 6.5 Creedmoor caliber range. Voere fitted the test rifle with an H7 stock from Hera Arms, which, according to the Austrian rifle manufacturer, is especially suited for dynamic shooting thanks to its weight ratio and stock geometry. What the Victor 3 in the two versions is capable of on the shooting range was tested at 100- and 300-meter ranges. Before that, however, we will take a closer look at the technology and design variants of the new Voere.

The match barrel as a single part weighs almost as much as the entire Victor 3 equipped with the lightweight hunting barrel and integral suppressor.

Like all modular Voere rifles, the Victor 3 allows the owner to change the barrel or caliber. The barrels are available in various contours, lengths and, in some cases, twist rates. Depending on the version, the barrels are blued or feature a Cerakote coating and can also be ordered with a carbon fiber wrapping. The gun was delivered with two barrels: a hammer forged, 29 mm thick match barrel and a short, slim barrel with integral suppressor for hunting. In the tested hunting version with integral suppressor, the Austrians use a 16.77”/426 mm barrel. If the suppressor is not used, a steel sleeve included in the scope of delivery can be used to close the ports of the perforated muzzle brake. This is especially useful on those ranges where muzzle brakes and compensators are not permitted. Behind the muzzle thread, the barrel diameter is only a slim 0.59”/15 mm. The diameter then increases to 0.82”/21 mm directly in front of the barrel root. The barrel surface is blued. Inside the barrel, which is protected against corrosion by bluing, four grooves with right-hand twist take over the bullet rotation. After 305 millimeters, or twelve inches, a 360-degree spin of the bullet is completed. 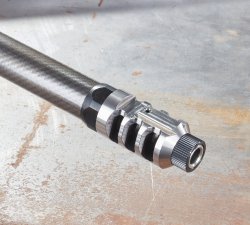 The effective muzzle brake of the massive match barrel of the Voere Victor 3.

Of course, the Victor 3 is also available without a suppressor. The interchangeable barrel supplied is a cold-hammer forged match type with a cylindrical outer diameter of 1.14”/29 millimeters. A fine thread (M19x1) is located at the muzzle; in the case of this barrel, it is used to accommodate the three-chamber muzzle brake familiar from the Voere LBW-M2.

The rifling profile and the twist rate are identical to those of the short hunting barrel. However, at 602 millimeters, the match barrel is 176 mm longer. This resulted in an average muzzle velocity increase of 50 to 60 meters per second during the test trials.

The match barrel, which weighs over three kilograms by itself, demonstrated outstanding accuracy on the shooting range. 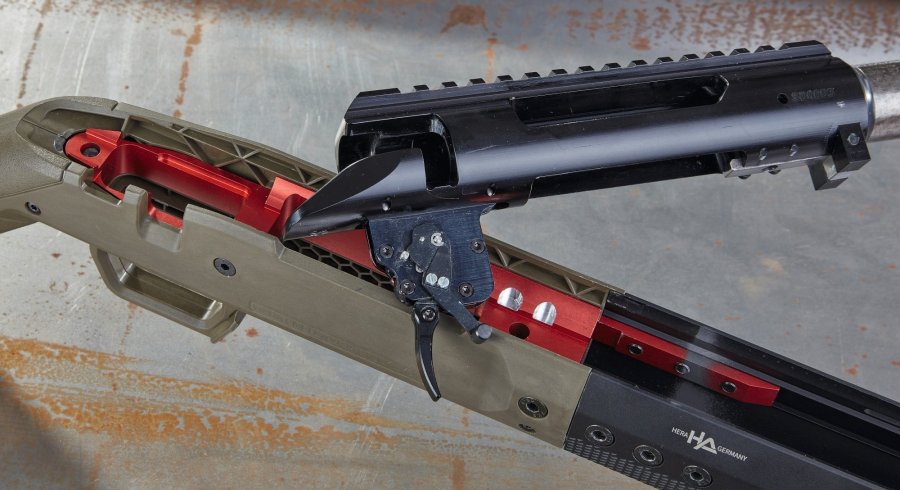 This H7 stock from Hera Arms not only fits the Short Action of the 700 from Remington. Thanks to the same system footprint fits here also the Voere Victor 3. 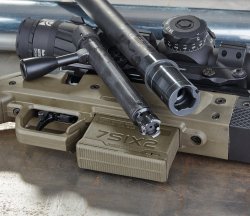 The magazine release, which can be operated from both sides, is located in the front of the trigger guard on the H7 stock from Hera Arms, directly behind the magazine well, which is designed to AICS standard.

Voere manufactures the action from a high-strength wrought aluminum alloy, and its surfaces are protected by a hard anodizing. On the top of the action, a MIL-STD-1913 Picatinny rail with a 20 MOA pre-tilt is machined out of the action light metal. Opposite is the trigger group. The two-stage trigger pull weight can be adjusted between 300 and 1,300 grams. From the Kufstein factory, the trigger weight was set at an average of 485 grams.

The preferred travel as well as the reset can also be adjusted. The trigger blade is available straight, bent and straight with an adjustable trigger shoe. Parallel to the trigger blade is the two-position safety in the trigger guard. Although this can be operated almost silently for hunting use, the testers were bothered by its position directly next to the trigger blade. The safety acts directly on the trigger. The bolt head features three lugs in a 120-degree arrangement and is interchangeable in accordance with modularity.

A standard extractor and opposing ejector handle case extraction and ejection from the chamber. 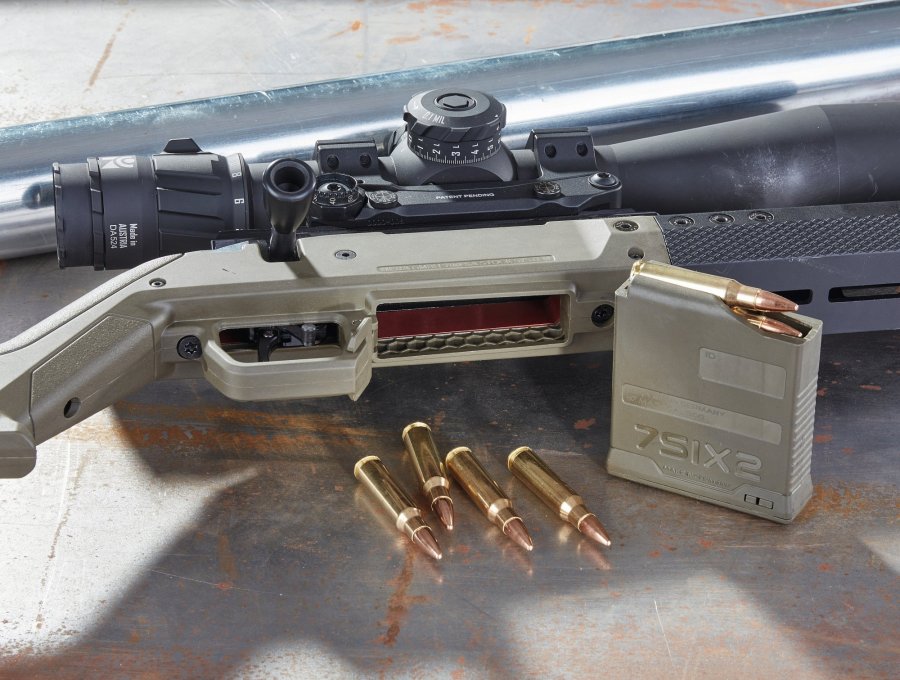 "7SIX2" on the magazine indicates the Hera Arms H7 stock is designed for the 7.62x51 NATO cartridge  aka .308 Winchester, and accepts Remington 700 actions. The stock has an orange-red mini-chassis made of aluminum inside. The handguard with M-LOK interfaces is also made of aluminum.


Following the Remington Short Action allows the Victor 3 to make use of the full range of aftermarket stocks for the popular 700 SA. In addition, of course, not only stocks fit, but also other accessories such as AICS magazines or trigger groups for the Remington action. For the test gun, Voere uses the H7 stock from Hera Arms. This is injection molded from fiber-reinforced and impact-resistant polymer. The entire forend of the H7 is made of aluminum and carries M-LOK mounts for attaching accessories. The connection between the synthetic stock and the forend is made using the action bedding integrated into the Hera element, which is made of milled and anodized aluminum. The buttstock accommodates the (non-adjustable) cheek piece. The stock length can be adjusted by means of spacers.

Practical test of rifle and Hera stock on the shooting range 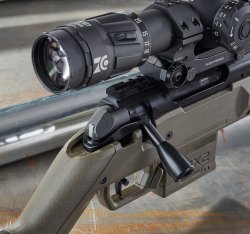 The lever of the two-position safety of the Voere V3, here in the “on” position, is in the trigger guard directly in front of the trigger blade. The scope is a ZCO 527 from Zero Compromise.

The optic used were a Zero Compromise ZCO 527 scope with Target 1 reticle. This scope from the still-young Austrian premium brand with 5x to 27x magnification and 56 mm objective is only 387 millimeters (15.24”) long and weighs a mere 1,075 grams (37.9 oz). The mounting was provided by an EraTac one-piece mount with adjustable pre-tilt. Testers fired the Voere in a seated position from a two-piece benchrest. The wide forend of the H7 stock allow for cant-free support in the shooting stand. Alternatively, a bipod can be mounted using the existing interfaces. Due to the short barrel of the Victor 3 with integral suppressor, a still high gas pressure and unburned powder residues are introduced into the suppressor and the space around the barrel by the brake ports. This leads to a rapid heating of the entire assembly, so that a cooling pause should be taken after approximately ten shots. For the intended hunting use, however, heating is not a problem.

In contrast to the thin hunting barrel, the powerful match barrel hardly showed any heating during long series of shots in the test. Accuracy can be described as excellent: ten of the twelve loads were clearly in the sub-MOA range, with two even achieving groupings in the range of 0.2 MOA and better. This high accuracy level was also confirmed and repeated at the 300-meter distance. Even after more than 200 cartridges fired, the Victor 3 showed no problems whatsoever in feeding, firing and ejecting the cases. Even the downward sloping buttstock retained its position on the shoulder during firing.

Thanks to the modular design of the Voere Victor 3 and compatibility with aftermarket accessories for the Remington 700, the gun leaves nothing to be desired in terms of customization. The hammer forged match barrel showed very high accuracy potential, making the rifle very suitable for dynamic and long range shooting. The H7 stock from Hera Arms offers an appealing and modern design. Starting at 2,721 euros, the buyer gets a very powerful and well thought-out firearm system that can be optimally adapted to the respective use by changing barrels and calibers. The H7 stock from Hera Arms alone can be purchased for 398 euros in specialized stores, available for Remington, Bergara and Howa systems (more info and technical data on the manufacturer's website of Hera Arms).

Subscribe to the Newsletter
This article is also available in this language:
DE
Click here for more information on the topics:
Hera ArmsRiflesHuntingHunting Rifles.308 Winchester
That might interest you too: 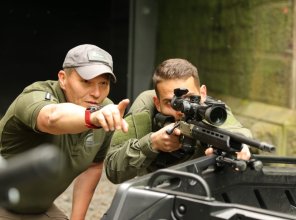 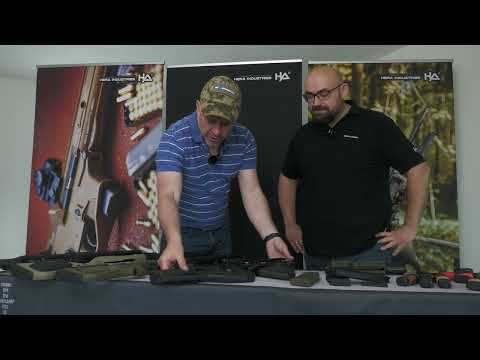 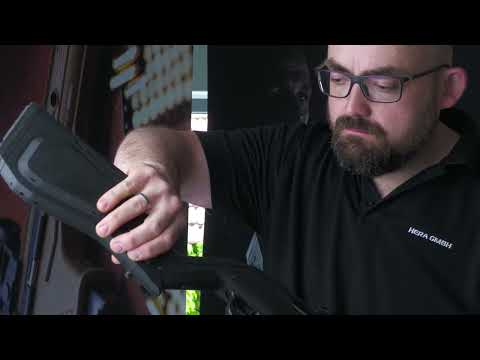 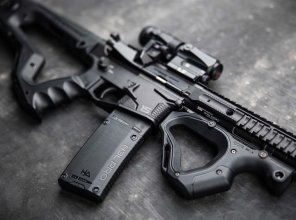 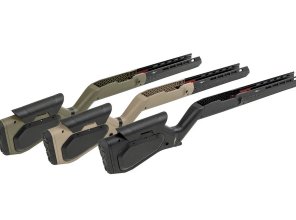 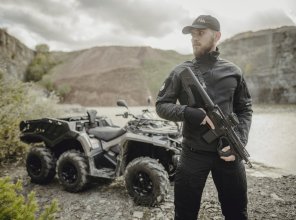 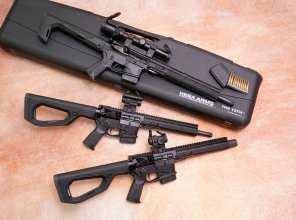