The Polish optics company Delta Optical has been manufacturing the 1.5-9x45 Titanium riflescope for over eight years now – the latest version bears the additional designation Titanium HD. At all4hunters.com, we want to find out what the all-round riflescope can do for a low price of 890 euros. 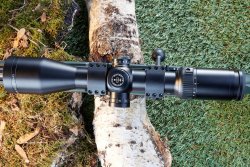 Marcus Heilscher
Height and side adjustment of the reticle are done in steps of a
quarter of an angular minute, i.e. 7.3 mm at a distance of 100 meters.

A riflescope for all situations – that's what many hunters want. Two specialized optics on a rifle also hit twice in the account and, two high-quality quick-release mounts are also not free. All in all, a stable, precise riflescope mount is much easier to buy on a tight budget if you can do without the quick scope mounting and releasing system. However, this also requires the right optic with a universal range of use, from group hunting to raised hide, even in twilight. Curtain up for the 1.5-9x45 Titanium HD from Delta Optical: compact in size and weight, the riflescope with its 6x zoom and a magnification range of 1.5x to 9x with a medium-sized 45 mm objective lens is recommended as a hunting all-rounder. Whether for stalking, walking hunts or sitting up into the twilight, with this concept you are always quite well equipped, as long as you do not plan to use it in moonlight.

Years ago, almost all manufacturers from Germany and Austria still offered compact universal optics with 4x zoom in the range around 1.5-6x40. These are now mostly out of fashion. Manufacturers such as Leica (Magnus), Schmidt & Bender (Stratos) and Swarovski (Z6i) also have all-rounders in their catalogs with high zoom factors between 5x and almost 7x, with lobjective enses around 40 millimeters in diameter and at least 8x max magnification. The latter, however, all break the 2000 euro mark, and can even cost more than 2500 euros. However, there is also competition at a price level corresponding to the Polish riflescope, for example in the form of the Meostar R2 1.7-10x42 RD from the Czech company Meopta – here the price is about a third higher than the 1.5-9x45 from Delta Optical.

The Delta Optical 1.5-9x45 Titanium HD under the microscope 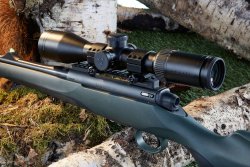 Marcus Heilscher
The illuminated dot can be adjusted via the knob on the left side of
the main tube. The knob clearly clicks into place, and between all
eleven brightness levels, it provides an "off" position for the
illuminated dot.

As with many current optics in the price range around 1000 euros, the riflescope from the Polish company Delta Optical is not manufactured in Europe: the words "made in Japan" adorn the 30-mm main tube made of high-strength aluminum instead. Delta Optical uses a so-called "2D" reticle in the second image plane with an illuminated dot in the center for the 1.5-9x45 Titanium HD. In principle, the 2D reticle is mostly similar to the popular reticle 4, but with one (non-illuminated) dot on each of the right and left sides of the wide crossbars. For those who do not need these additional dots, Delta Optical also offers the scope with a conventional reticle 4.
The illuminated dot control on the left side of the main tube offers eleven brightness levels, snaps into place in a clearly defined manner, and turns the dot off completely between each intensity level. Brightness was also fine – in sunshine against the sky the dot still appeared sufficiently bright, dimmed down to level 1 the dot did not over-illuminate even in the dark. The diopter adjustment on the eyepiece allows the lens to be adjusted to the user's vision in a range of plus/minus three diopters with a flick of the wrist. 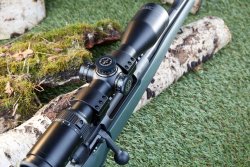 Marcus Heilscher
With a six-fold zoom factor and a magnification range starting at
1.5x, the compact Delta Optical is recommended as an all-round hunting
scope.

Mounted on a Mauser 18 Waldjagd in .308 Winchester, the test scope completed the box test without any problems. With five squares shot after 30 clicks of reticle adjustment each, the last hits landed back in the first group. The overall adjustment range of 60 angular minutes is appropriate for a riflescope that is used at short and medium ranges. The click detent itself provides consistent audible and tactile feedback during adjustment.
The eye relief of around nine centimeters was on the usual level, depending on the magnification. Turned down to 1.5x magnification, the room for the eye appeared reassuringly large; at the highest magnification, the eyebox shrank a bit, but not to an unusual degree.

The Polish mid-range riflescope left a fundamentally good impression both on the shooting range and during a late-night hunt, although this was somewhat marred by a slight blurring at the edges and a moderate brownish cast in the color reproduction. What we really liked about the compact Delta Optical: at one-and-a-half times magnification, you can also aim with both eyes open, making the scope suitable for driven hunts. The 24.4-m field of view at a distance of 100 meters at the lowest magnification limits the view considerably compared to pure driven hunt specialists with a 24-mm lens. Some manufacturers offer a field of view of well over 40 meters, which is twice as large in direct comparison.

Our test conclusion on the Delta Optical 1.5-9x45 Titanium HD

Overall, the 1.5-9x45 Titanium HD from Delta Optical appears to be a mature all-round hunting optic in the medium price segment. Price is consistent with the quality offered, one must only be aware that in everyday hunting – except for night hunts – a slim and lightweight all-round model such as the 1.5-9x45 can do everything properly, but nothing perfectly.

With the Delta Optical 4-24x50 Titanium HD, we tested another all-round scope from the manufacturer.

Subscribe to the Newsletter
This article is also available in this language:
DERUIT
Click here for more information on the topics:
DELTA OpticalHuntingOptics
That might interest you too: 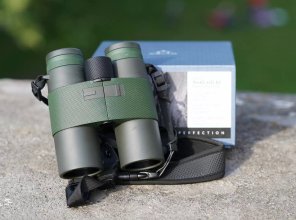 This year, our cameraman Matze had the opportunity to test the affordable Delta Optical Titanium 9x45 HD RF binoculars over a period of three months on the stalk and from the elevated blind, as well as under different climatic conditions. in this article you can learn why this is important for the user and what the binoculars can do. 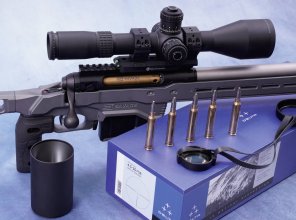 Sports shooters pay top manufacturers a lot of money for powerful riflescopes with high magnifications in the most compact design possible. The young Stryker HD 4.5-30x56 FFP from the Polish company Delta Optical is not available at a bargain price at around 1750 euros – but according to our test experience, it is worth every cent. 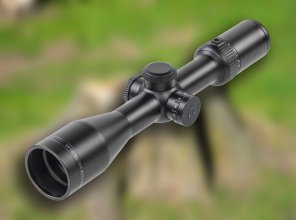 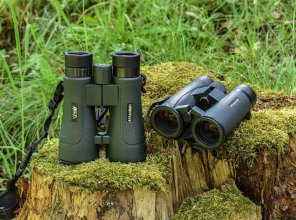 A comparison between Delta Optical binoculars and premium-class optics wouldn't be fair, because up to 7 times higher prices have to come from somewhere. Nevertheless, the Polish Delta Optical Titanium 8x56 and 8x42 HD binoculars can easily keep up with many more expensive competitions. On all4hunters.com and in our video we present you these two inexpensive … 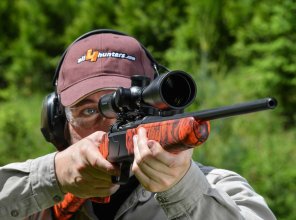 The Titanium series by the Polish manufacturer Delta Optical now includes 13 models. Among them, the new Titanium 4-24x50 HD with 4A-S reticle for hunting and 4A-SB reticle for long-range shooters, a real all-rounder suited to almost every hunting application. We’ve taken a look at this riflescope, which is available from 990 euro. In addition to interesting information, here on all4hunters.com we … 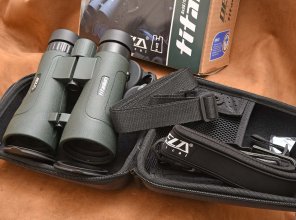 A quite affordable optic: it would not be fair to compare it directly with premium-class optics that cost seven times its price, but it must be said that all in all it doesn't look so bad in that comparison and it can easily give triple-priced binoculars a game. 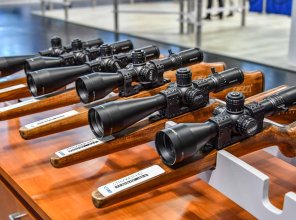 delta-optical03/15/2019New riflescopes from Delta Optical at the IWA 2019: line extension for Titanium HD and Stryker HD

IWA 2019 / New from Delta Optical: Titanium HD and Stryker HD in new versions and with more reticles. Here at all4shooters.com you can read which new products the Polish manufacturer brought to IWA this year. One thing in advance: the latest versions seem more than impressive in terms of price-performance ratio.