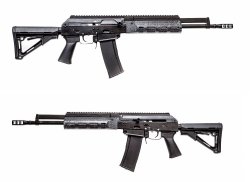 OJSC "Concern Kalashnikov"
The current form of the MK-107: an even more improved version, provisionally named the "AK15", is slated to enter production in the near future

OJSC "Concern Kalashnikov"
The Saiga MK-107 as showcased in its pre-production stage at the 2013 edition of the IWA expo in Nuremberg (Germany): it underwent quite some changes ever since

The Saiga MK-107 semiautomatic rifle was primarily conceived for sport shooters who practice disciplines such as IPSC, IDPA or 3-Gun shooting.

Speed and accuracy are of equal importance in all of those, and the Saiga MK-107 – as well as its planned improved version, provisionally dubbed the AK15 – are intended to provide sport shooters with a rifle that would offer very fast target realignment and recovery from recoil shot after shot, allowing fast and accurate double-taps or longer and likewise accurate rapid fire in semiautomatic mode.

The Saiga MK-107 was conceived at the IZHMASH factory (now an essential part of the “Concern Kalashnikov”) in 2012 as a semiautomatic version of the abortive AK107 assault rifle – a design based on a “balanced action” principle. Two top IPSC shooters working for the Kalashnikov Concern – namely Andrej Kirisenko and Vsevolod Ilyin – would later become the “godfathers” of this weapon. 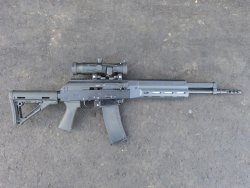 After several years of tests and developments, Saiga MK-107 has been scheduled to enter mass production in late 2015 and to be made available to Russian shooters holding a standard hunting rifle license; it will also be offered for export along all other models of the Saiga line of rifles.

The Saiga MK-107 semiautomatic, gas-operated rifle features a recoil-mitigating “balanced action” system. This means that the gun basically sports two twin gas pistons, entering a single block above the barrel from opposite directions: the rear gas piston is attached to the bolt carrier group, while the front gas piston – which moves in an opposite position to the rear piston as the gun cycles – is secured to a sliding counterweight mass located above the bolt carrier group. 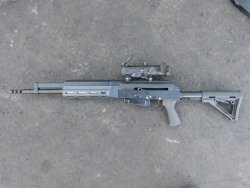 The counter-recoiling masses are synchronized through a pair of rotating gears, so as the gun cycles the movement rearward-forward movement of the bolt group is balanced by a counter-moving mass attached to the front gas piston, effectively canceling the impulses generated by heavy reciprocating parts.

As a result, the rifle generates less felt recoil and is much easier to keep on target during rapid fire. 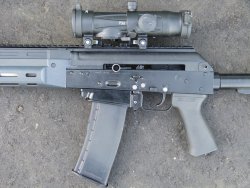 Maxim Popenker
Two controls previously unseen on AK derivatives are clearly visible on the left side of the receiver of the Saiga MK-107: a cross-bolt manual safety and a hold-open catch device

Bolt locking is achieved through a conventional “Kalashnikov-style” rotating bolt with two locking lugs that engage the barrel trunnion pinned inside the stamped steel receiver. Reciprocating charging handles are attached to the bolt carrier on both sides, for ambidextrous cocking.

A dual return spring arrangement (one for the bolt carrier and another for the counter-weight) completes the setup.

It should be pointed out that the synchronizing gear unit is designed to require no in-depth disassembly all throughout its entire service life. 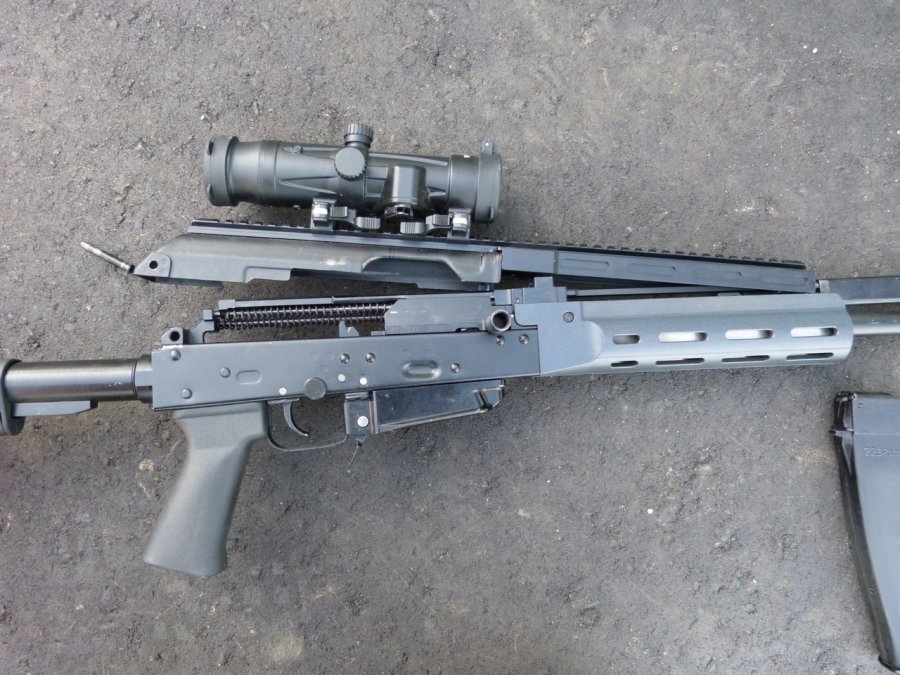 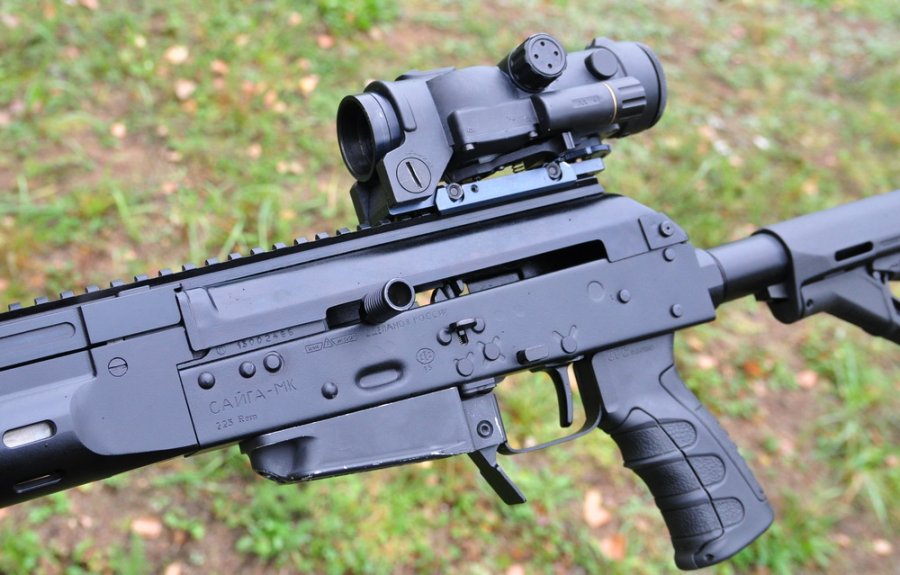 From the archives of all4shooters.com
From assault rifle to sporting rifle: the Saiga MK-107 transfuses the balanced operation system of the AK107 into a rapid-firing, reliable competition machine 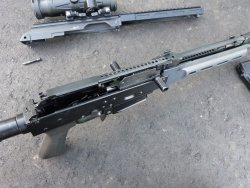 Maxim Popenker
Once removed, the top cover provides access to the balanced operation system of the Saiga MK-107

The receiver top cover has been significantly redesigned, if compared to earlier AK-type rifles, and is similar to that used on the new AK12 assault rifle; it is manufactured out of stamped steel, and features a full-lenght integral MIL-STD-1913 “Picatinny” rail. The top cover is secured to the gas block and at the front of the receiver by two dovetails, and at the rear of the receiver by a removable cross-pin.

This results in a secure and stable platform for any kind of Picatinny-compatible optical gunsight. 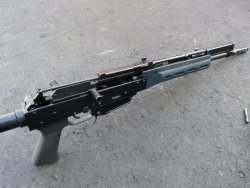 Maxim Popenker
The twin piston system is hereby clearly visible, along with the recoil-reducing counterweight

The Saiga MK-107 comes factory-equipped with an M4-style collapsible/adjustable stock, and a polymer forend.

Other features, unique in the world of AK-type rifles, include a cross-button manual safety above the trigger guard, a last round hold-open device with a release lever located on the left side of the receiver above the magazine catch, and a funneled magwell for faster mag change. 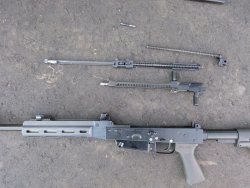 Maxim Popenker
Despite being not quite intuitive as it would be on any other AK derivative, the field-stripping procedure of the Saiga MK-107 is still quick and easy

The current version of the Saiga MK-107 feeds through Saiga .223 magazines.

The planned future production version – which has been assigned the provisional moniker of “AK15”, and assumed (but so far not confirmed) to enter mass production sometimes next year – will most likely accept standard AK74 caliber magazines in its 5,45x39mm variant and STANAG 4179 (“M16-type”) magazines in the 5,56x45mm/.223 Remington variants. No news so far concerning any planned version in 7,62x39mm.

From the archives of all4shooters.com
The funnelled magazine well of the Saiga MK-107 was conceived to facilitate quick mag changes 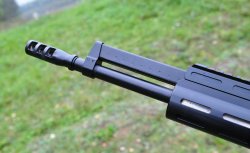 From the archives of all4shooters.com
Alongside the balancement provided by the twin pistons system, the factory-issued compensator also plays a role in reducing muzzle climb

I was able to fire several magazines through a .223 Remington caliber Saiga MK-107 pre-production model. The rifle feels solid and quite comfortable in handling. Recoil is negligible, without any discernible muzzle climb even in rapid fire. The tested sample was equipped with a variable-power 1-4x sight, so I had no problems in hitting steel plates out to 200 metres with every single pull of the trigger. There also were no malfunctions to be reported.

The field-stripping procedure is not exactly as straightforward as in any classic AK-type rifle, but I had no problems in taking the Saiga MK-107 down without any guidance or instruction manual; even more important, I had no trouble assembling the gun back without any parts left after the assembly. Overall, the Saiga MK-107 semiautomatic rifle is a very interesting and promising design, especially for practical sport shooters. 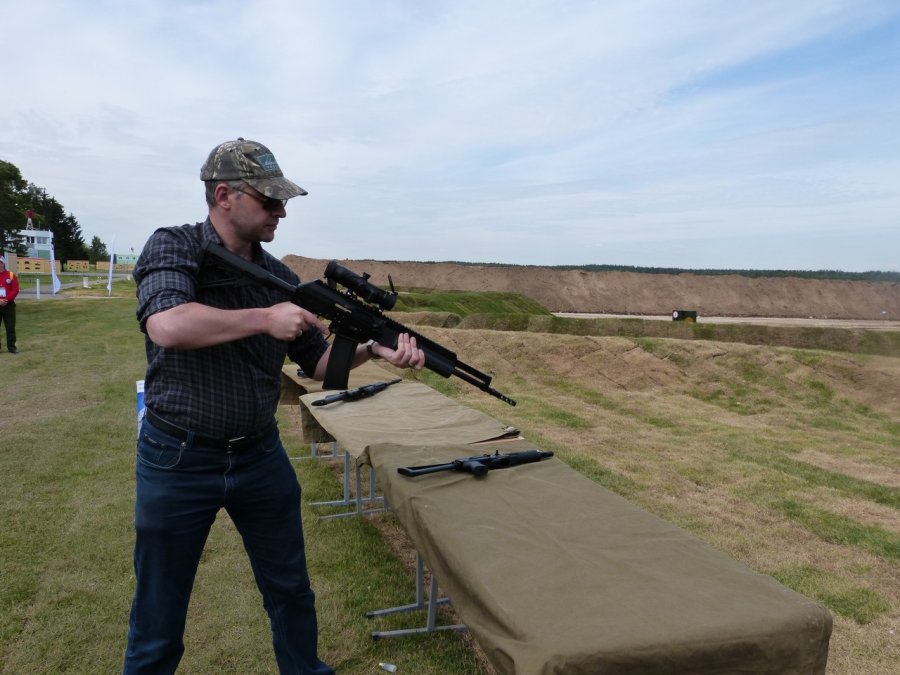 Maxim Popenker
Author's impressions on the Saiga MK-107 were quite good: the gun shows great potential 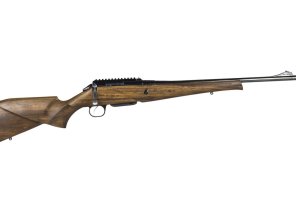 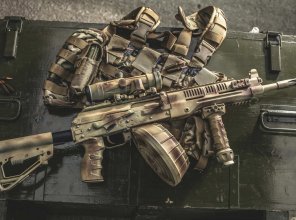 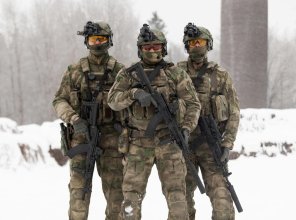 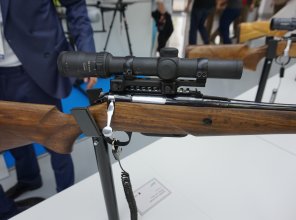 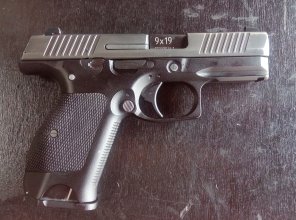 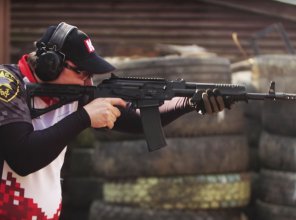 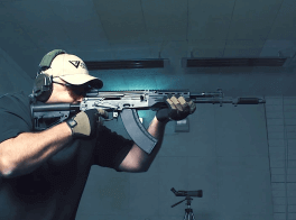 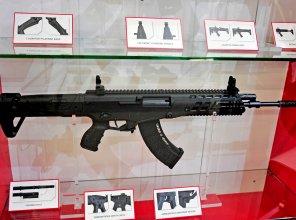