A bolt action rifle with a distinctly sporty touch, also suitable for long-range shooting – this is how it presents itself. The test report reveals the technical details of Bergara's Premier Ridgeback model and what the bolt action rifle achieves in practice.

Bergara's company motto fits in five words: "Our barrels make the difference". That the barrels make the difference is because Bergara, a manufacturer part of Dikar S. Cooperacion group and based in the Basque city of the same name, makes its own barrels. Not only for its own firearms, but also for a number of other manufacturers worldwide. Ten years ago, the Basques made their debut at the IWA as barrel and rifle manufacturers under the factory name Bergara. In 2015, the company introduced the B14 bolt-action rifle, which has since grown into a multi-branched family of guns. And its members are made in Spain as well as in the US Bergara plant in Lawrenceville, Georgia. However, the guns manufactured in the USA do not go under the name of B14, but under the collective name Premier – the Premier Ridgeback version presented is also part of this series. This is a rifle well suited for both precision and hunting long range shooting. It combines a Spanish heart with an American dress.

The bolt and receiver of the Bergara Premier Ridgeback 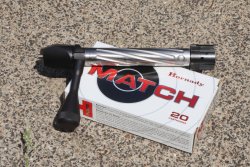 The Premier Ridgeback is a classic bolt-action rifle. It is completely in the style of the Remington 700 and is also compatible with it. The two-lug bolt locks directly into the barrel. Bolt throw is 90 degrees. Typical for Bergara, the bolt is made of stainless steel. The bolt shroud is similar to that of a Tikka T3, but unlike the Tikka's one, it is not made of plastic but of steel. The bolt body is spirally fluted, which is supposed to reduce friction when opening and closing. The bolt handle is also made of steel and pleasantly checkered. When cocked, the firing pin protrudes from the rear of the bolt shroud, giving the shooter visual feedback as to whether the gun is ready to fire.

To disassemble the bolt, the bolt shroud must be turned counter-clockwise by only 60-70 degrees, contrary to the operating instructions. Afterwards the firing pin and spring can be removed. Reassembly is done similarly. With a little effort the bolt shroud must be pushed forward and locked again. The small hole, into which according to the operating manual a pin is to be inserted, did not exist at least in the test gun. 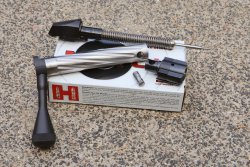 Daniel Lang
Bolt disassembly: with the firing pin spring cocked, turn the bolt shroud slightly counter-clockwise by 60-70°. Afterwards everything is loose and can be separated.

The round receiver has, as typical for Remington, four screw holes on the upper side for mounting an optics rail. Here Bergara fitted the test rifle with an in-house Picatinny Rail, about 6.5”/167 millimeters long, without a forward tilt. The underside of the receiver is also compatible with the Remington 700, and because there is a rich aftermarket for 700 accessories, there are virtually no limits to the possibilities when it comes to stock variations. A recoil lug effectively transmits the recoil force when firing a cartridge to the stock, thus relieving the stress on the receiver, The Premier Ridgeback has a magazine well into which a polymer 5-round magazine is inserted. Since the magazine bears the company logo, it comes directly from Bergara. But it is compatible with the products of the British brand Accuracy International Chassis System (AICS). That's why there are many possibilities for this on the aftermarket, too.

The Triggertech trigger of the US Bergara

For this element Bergara relies on the US manufacturer Triggertech and uses an adjustable single stage trigger, in this case the Primary model – which also fits the Remington 700. The trigger can be adjusted from 680 grams to a relatively heavy 1800 grams by means of an adjusting screw. The one on the test gun broke with a high degree of consistency at almost exactly 1500 grams. It did this very crisply, i.e. without creeping or stacking. The built-in two-position safety on the right side of the receiver logically acts directly on the trigger.

The Grayboe stock gives the Ridgeback its name 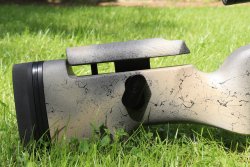 Daniel Lang
The height adjustable cheek rest of the Grayboe polymer stock is locked in position by the wing knob.

Grayboe is the manufacturer of this part. The plant in Glendale, Arizona, specializes in the production of hunting and competition stocks, but also tactical stocks. Company founder Ryan McMillan brings the know-how from his time as a Navy Seal – for those to whom it sounds familiar: the name of the boss is probably better known to many people through his original company McMillan Firearms. He sold it in 2013 and founded Grayboe.

The stock model of the Bergara has the fitting name Ridgeback. The stock is made of fiberglass-reinforced polymer and features a height-adjustable cheek piece. This can be adjusted in height by 0.78”/20 mm using an adjusting screw. An approximately  0.78”/20 mm thick butt pad absorbs much of the recoil and provides a kick as soft as butter. Two built-in spacers adjust the length of the butt pad by around 0.5”/13 millimeters – one of the testers was annoyed by the fact that the edges of the spacers protruded noticeably from the buttstock. On the left side of the stock and on its underside there is a QD flush cup sling mount. The stock forend is quite solid and flattened on the underside. Thus the gun lies perfectly on the ground and can be placed stable in a Rifle Rest. In addition, there are M-LOK slots on the forend at 3, 6 and 9 o'clock for attaching additional equipment, such as a bipod. The barrel is fully free-floating – four layers of standard laser printer paper (80 g/m2) could be pulled through between the barrel and stock without any problems. The color of the stock remains to be mentioned: tan-gray with black speckles that looked like they had been sprayed on by the painter Jackson Pollock himself via "Action Painting". Anyway, the official name of the stock color is "tan with black web".

The barrel – does it really make the difference? 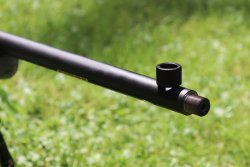 If 0.47”/12 mm groupings are not convincing, what is? So, a clear yes. What makes the difference, according to the Bergara motto, is stainless steel with black Cerakote finish. It is a match barrel, nominally 24”/609 mm long, and when re-measured it was exactly 24.01”/610 millimeters from muzzle to breech face. The contour is conical, starting at 0.85”/21.7 mm at the muzzle and increasing to 1.2”/30.6 millimeters at the root. The match recessed crown at the muzzle proves to be perfectly worked.

In addition, the Bergara Premier Ridgeback has a 5/8-24" muzzle thread with a corresponding thread protection cap for the attachment of flash hiders or suppressors. The Bergara guys are particularly proud of their own way of barrel manufacturing: before a blank is even machined, it is measured and, if necessary, straightened to an accuracy of 4/1000 of an inch. Then the honing of the barrel bore is continued until the inside shines like a mirror. This is followed by the rifling using the button-drawing technique. Finally, Bergara subjects all barrels to a special heat treatment. This is intended to safely relieve all stresses from the previous processing steps.

With the Premier Ridgeback from Bergara on the shooting range 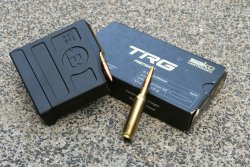 For the practical test, the testers moved together to a former military shooting range. There, conditions are ideal for shooting up to 300 meters. The testers mounted the SOLO mobile electronic target system from Silver Mountain Target. It uses four microphones to detect an incoming supersonic bullet and thus determines the speed and position of the projectile on the target. The all4shooters.com team positioned a LabRadar at the shooter's position to determine muzzle velocity. This device uses radar waves to measure the velocity of the bullet flying away. To ensure that the test shooter could put the bullets in the right way, a Swarovski riflescope was mounted on the gun: the Z8i 3.5-25x50 is ideally suited for accurate shots.

During testing, the Bergara fired five match and three hunting cartridges. After zeroing in, the 100-meter grouping circles were ready to go. Two tests loads stood out. One was the Sako TRG Precision with a 136-grain Lapua Scenar L bullet: the group was  0.47”/12 mm, with five hits hole in hole, touching each other.

The Bergara Premier Ridgeback proved to be a mix of Basque and American components, came out as a neatly crafted rifle and shot very comfortably. The 6.5 Creedmoor caliber contributes to accuracy. 2940 euro is certainly not quite cheap, but completely appropriate for the beautiful gun you get for it. Thanks to the compatibility with the Remington 700, customers can choose from a huge accessory market, so that they can pimp the gun to their heart's content, if desired. This is not necessary – the Premier Ridgeback proved to be a pretty complete package.

Subscribe to the Newsletter
This article is also available in this language:
DE
Click here for more information on the topics:
BergaraRiflesLong range rifles Long range shootingTest
That might interest you too: 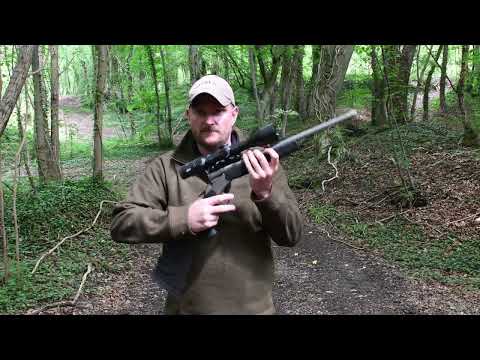 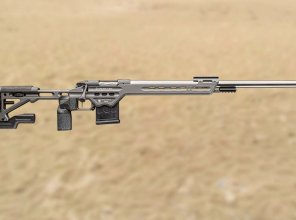 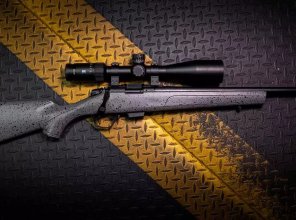 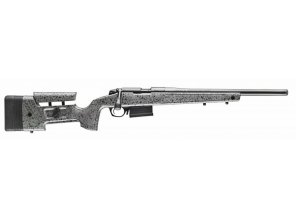 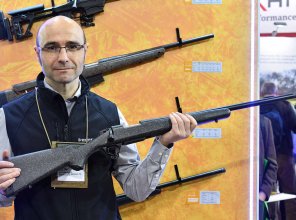 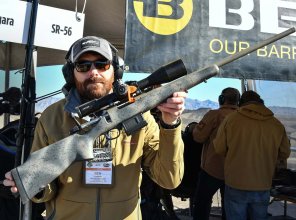 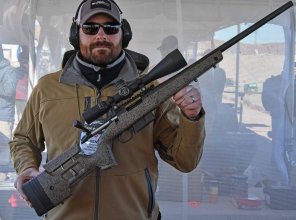 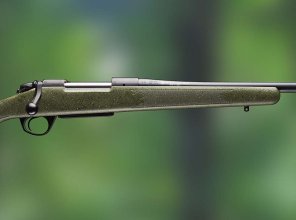