The Swabian weapon manufacturer known for its distinctive red “HK” logo will celebrate its 65th anniversary this year. Time and again, the internationally renowned Heckler & Koch company is in the public limelight as a traditional supplier for the German Army as well as for law enforcement. But, let us now focus on the brand-new HK weapons

The reasons for HK’s excellent international reputation are multifaceted. It was established a half century ago, manufacturing true milestones in the history of weapon-making such as the German G3 assault rifle in 7.62x51mm and the MP5 submachine gun in 9x19. Heckler & Koch today excels with a program of products that has yet to be matched.

The very classic, but still valid HK PSG/1 A1 precision semiautomatic rifle chambered for the 7.62mm round

In addition to modern polymer-framed service pistols such as the USP and P30 series, the range includes the submachine guns MP5, UMP and MP7 in all the popular calibers such as 9 mm Luger, .40 S&W and .45 ACP, whereby the light, extremely compact MP7 is chambered for the snappy 4.6x30mm micro-caliber. Heckler & Koch is also well-positioned in the assault-rifle segment with the G36 as well as the model series HK 416 and HK 417 on the basis of the American AR-15/AR-10 platform systems, available in 5.56x45mm and 7.62x51mm calibers. Precision and sharpshooters can still rely on the classics in the form of the PSG1 A1 or MSG90 A2 or the young G28, all three in 7.62x51. In addition, Heckler & Koch produces the MG4 in 5.56x45 and HK 121 in 7.62x51 machine guns, which, following the German Army's acceptance of a number of test samples, now has the official designation MG 5. In the realm of 40 mm weapon systems, Heckler & Koch steps up with the impressive grenade machine gun (GRAMAWA) in 40x53 mm next to the add-on, single shot grenade launchers AG36 (for G36) and GLM (for HK416/417 and in future also G36), and the grenade pistol HK 169.

The HK 416 A5 in 5.56x45 with again significantly improved handling comfort.

… that prompted Heckler & Koch to create the AR-10/AR-15 weapon system. By the end of the 1990s, nearly 25 years of development time and 88 million German marks had flowed into the production of the G11 with caseless ammunition. But the fall of the Berlin Wall and the breakup of the Warsaw Pact meant that this firearm, far ahead of its time, was not introduced and disappeared into the armory as an expensive concept study. The strategy of betting "everything on one card" almost ended in insolvency. However, the 1991 takeover by Royal Ordnance brought in new investors so that development and production could continue. 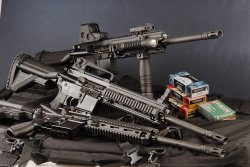 Franco Palamaro
Three configurations of the Heckler & KochMR223, the civilian version of the HK 416

At that time, the sales markets in Europe and western hemisphere shrank because of the disappearance of the enemy in the east. The affiliation with the British Royal Ordnance Group brought Heckler & Koch the contract to rework the Enfield SA 80 Bullpup assault rifle, a weapon that is not exactly known as a shining paradigm of reliability. The so-called "Midlife Improvement" bestowed on the company an order volume of 300 million DM and provided years of job security at the Oberndorf plant.

We saw the company's production processes for ourselves during our visit at the end of January 2014. In addition to state of the art multi-axis automatic mills and lathe machines - all Made in Germany -  capable of turning out an HK 416 bolt carrier with a single clamping from solid billet, they use machines or equipment based on their own in-house ideas. For example, an in-house development for rifling barrels in the G36 assault rifle where the interior barrel contour is measured by a laser beam. It is interesting to note that an autonomous business division continues to produce machine tools by Heckler & Koch. The numerous testing stations in the factory demonstrate continuous quality management, testimony to the most stringent safety requirements placed in the products. For example, all firearms designed since the 1990s are submitted to a barrel obstruction test.

In this test, designed to meet NATO requirements, a bullet is placed at different positions in the barrel for a total of three different tests, and a round fired at this bullet must not cause the weapon system to burst. 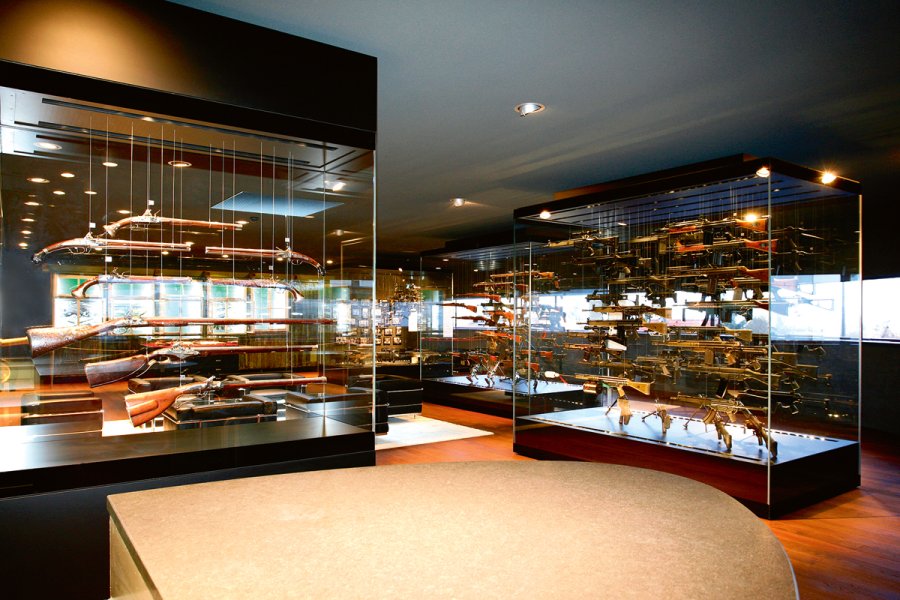 A glimpse of the Heckler & Koch Museum, at the firearms manufacturer's headquarter in Obendorf am Neckar in Germany

The fact that the engineers and designers always struck out on quite original technical paths certainly contributed to the global reputation of the company. Elaborate inventions such as the P11 underwater pistol or the G11 Bullpup assault rifle, designed to use caseless ammunition, demonstrate their approach. Heckler & Koch is all set to celebrate its 65th anniversary in 2014. In 2013 the company scored sales of approximately €235 million with 675 employees. About 60 armies and more than 200 police institutions around the world rely on firearms with the two red letters in its logo.

We not only had the chance to tour the production lines during our visit, we had presentations about the different HK weapon types, sometimes by the designers directly involved, with a lot of background information.

In contrast to the MG 4 in 5.56x45, the HK 121/MG 5 is again chambered for the higher power 7.62x51 cartridge. Operation is similar to the smaller brother, but the weapon is armed with a cocking slide rather than a foldable lever. The buttstock can be removed by turning the twist-lock 90° and exchanged for a fixed, foldable or fully adjustable buttstock. The mounting interface of the well-known MG3, already introduced in the German Army, was kept. The rate of fire can be adjusted from the outside with a cartridge case for 640, 720 and 800 rounds per minute. Like the MG 4, the 7.62 machine gun can be armed from the safe position. The gas-operated system has a barrel-length of 550 millimeters and in the universal configuration weighs about 11.6 kilos. This stirred some criticism since its weight is exactly that of the MG 3, and so it shatters a few dreams about a lighter machine gun. 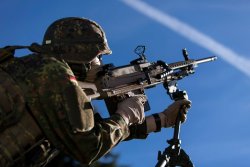 The high weight is of course a consequence of the extremely rugged build, and the manufacturer cannot be blamed for it because the German Army specified a higher service life of 50,000 rounds for the receiver as well as 10,000 rounds for the barrel. The special HK 121 version produced to the Danish Army's tender specifications demonstrates that the Swabians know how to do it differently. Here the main focus was on a weight of less than 10 kilos, and at 9.9 kilos the result matched the specification spot-on. For the Danes, the lower weight and the associated mobility are more important than the greater durability of the weapon. The difference depends more on priorities and the wishes of the customer than on the manufacturer's idiosyncrasies.

The semiautomatic sniper rifle HK G28 in 7.62x51mm, with silencer

On account of the above average requirements of the troops for robustness and precision (45 mm with 10 rounds at 100 m with precision ammunition as well as lowest impact point deviation when using a sound suppressor over at least 5000 rounds), the only option was to use a steel upper receiver which, in comparison to the HK 417/G 27’s aluminum receiver, adds around 600 grams. All the more if we consider the forces that develop when a sound suppressor is attached to the far end of the lever on a design-dependent barrel that sits only 25 mm deep. There is a new sibling for the model series HK 417 A2.

In addition to the already available barrel lengths of 20"/508 mm, there are the 16.5"/419 mm and 13"/330 mm, whereby the last version is supposed to replace the already existing 12"/305 mm version. Since the sometimes insufficient power of the 5.56x45 did not lead to the introduction of an alternative medium cartridge such as the 6.8x43 SPC, word has it that some special forces are interested in weapons in 7.62x51 with short barrel lengths, especially because of the interchangeability of magazines and ammunition between DMR and machine gun shooters.

For now, the A5 version of the HK 416 in 5.56x45 is the last step in its evolution. Special features include the lower receiver with ambidextrous fire controls, enhanced compatibility with M16/M4 magazines as well as the improved tool-less adjustable gas regulator for suppressor use. There are two new buttstocks for the HK G36, one for using a ballistic helmet with protective visor, the other with a retractable and foldable buttstock with a height adjustable cheek piece used, for example, by special forces commandos or in the Infantry of the Future program.

The Heckler & Koch MP5 MLI, updated with a Triple-Rail forearm, a Quick-Release-Mount and the new RAL8000 color scheme.

An aluminum handguard with integrated Picatinny rails at 12 and 6 o'clock is now available for the G36 Standard and G36 K, and additional rails can be attached over the keyhole interface at 3 and 9 o'clock. The magazine well adapter enables use of the M16/AR-15 magazines in the G36, which HK has offered for some time "HRM" metal versions and recently also in versions made of high-strength transparent plastic. The MP 7 A2 now comes with an alternative "Triple Rail" handguard for mounting additional accessories such as light or laser collimator modules. The legendary MP 5, on the other hand, was upgraded in the framework of the MLI (Mid-Life Improvement) and combines a "Triple Rail" handguard, which fits all models except for the short and suppressor versions, with a Quick-Release Top Rail on the upper side for mounting sighting devices. The MP5 MLI is further enhanced to include a three-position buttstock. Of course, the classic from HECKLER & KOCH is available in black and in the new German Army standard RAL8000 color (a green-brown shade).

At the range with the new Heckler & Koch models:

Toward the end of our visit, we had the chance to test fire almost all of the current firearms in the product portfolio at the nearly 13-hectare large Heckler & Koch outdoor shooting range in Aixheim. That gave us a first-hand performance-impression. Plenty of ammunition was on hand to bring submachine guns and assault rifles to life at the usual short distances, or the G28 at 600 meters. The belt-fed GMW grenade machine gun in 40x53 mm caliber was particularly memorable: it makes a powerful impression with 350 rounds per minute and a hefty sound.