Death of Mikhail Kalashnikov, inventor of the AK-47

Russian arms designer Mikhail Timofe'evich Kalashnikov (1919/2013), the inventor of the AK-47, the world's most famous assault rifle ever, passed away aged 94

M.T. Kalashnikov Museum and Exhibition Small Arms Complex
Kalashnikov's career as an arms designer started at the onset of World War II and proceeded at the IZHMASH Plant

Reports about his death had been spread multiple times in the past years  notizia era stata già data in passato più volte − and had been greatly exaggerated, as Mark Twain would said! − but on December 23rd, 2013, a sad confirmation came from official Russian sources and from Press agencies worldwide to sadden the Christmas holidays of many gun enthusiasts worldwide: Mikhail Timofe'evich Kalashnikov has passed away.

94-years-old Russian arms designer, a decorated Hero of the Soviet Union, Hero of the Socialist Labor and holder of the Order of Lenin, had been honorarily promoted to Major General by Russian President Boris Eltsin for his 75th birthday. His career as a designer at the IZHMASH factory had come to a halt about a year ago, when he first had to undergo a long series of hospitalizations caused by his age-related health problems; he had been suffering from severe heart conditions for a while, now. 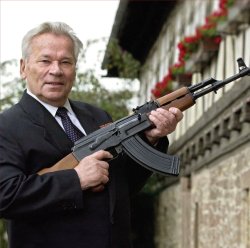 M.T. Kalashnikov Museum and Exhibition Small Arms Complex
A successful design based on sense and simplicity: the Kalashnikov rifle is elementary to produce, very intuitive to fire, and requires very little maintenance

Much admired and much hated by so many around the globe, Mikhail Kalashnikov was born on November 10th, 1919 in a small village in the Altaj territory named Kurya; a south-eastern Siberian hamlet close to the Mongolian, Kazakh and Chinese borders offered very little perspectives for a poor peasants family like the Kalashnikovs: Mikhail had eighteen brothers and sisters, and yet he was one of the only six of them who survived the harsh conditions and poverty of the time.

His survival, however, led him straight in the pits of the biggest tragedy in world history: World War Two.

Mikhail Kalashnikov joined the Soviet Red Army in 1938, and his capabilities in designing weapons and equipment were quickly noted, although he was first assigned to a tank regiment as a mechanic and commander. In 1941, however, Axis forces invaded Russia, and Kalashnikov − then serving as a senior sergeant − was wounded in October during the Battle of Bryansk, when his T-34 tank was hit and destroyed by a German shell.

During his hospitalization, Kalashnikov started experienging flashbacks of the attack in which he had been hurt, and reportedly "became obsessed with creating a submachine-gun that would drive the Germans from his homeland" − particularly knowing the deficiences of the then-issued Soviet infantry weapons if compared with the German issued guns.

His first pistol and sub-machine gun prototypes were not adopted, although he had a chance to study several German guns, including the earlier and latter Sturmgewehr samples. Mikhail Kalashnikov was between the first to ever fully understand the potential of an "assault rifle"; at the end of the war, Kalashnikov could then take advantage of the work of German arms designers transfered to Soviet Union to help perfect the design, and by 1947 the first working prototypes of his rifle were up and running.

Kalashnikov's rifle − whose layout was finalized in the 1950s − was a true Copernican revolution for the time: easy and cheap to manufacture by the numbers, intuitive to use proficiently, utterly reliable, it filled the capability gap between the then-issued submachine-guns and bolt-action rifles. It quickly became a true flagship of the Soviet bloc, and dozens of Countries around the world started to manufacture clones and slightly modified variants of it, either with or without a Soviet governmental authorization − often improving the design as the years went by. As of 2013, over one hundred million AK-type rifles have been manufactured worldwide. 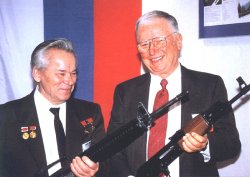 The AK, AKM and variant rifles quickly became a true emblem of resistance, rebel and revolutionary movements around the world − a true cultural icon of the 20th Century − although its simplicity also turned it into a weapon of oppression rather than liberation: it has since been used by terrorist organizations, dictatorial governments, child soldiers, and criminals everywhere, particularly after the fall of the Soviet Bloc, as the former Communist Countries lost control of their arsenals, which were looted and flooded the black market with illegal weapons.

However, Mikhail Kalashnikov never took responsibility for all the deaths caused by AK-type rifles: he always − and rightfully so! − blamed global and national politics for the tragedies that take place in so many Countries in the world, and for all the deaths that would happen either with or without "his" rifle". As a matter of fact, the AK rifle never made Kalashnikov rich, and he often joked about that, stating that he would have "been better off designing a lawn-mower". Only recently he had found a certain economic well-being, by selling off the license for the use of his surname as a trade mark for several gadgets and even for a vodka brand. The Kalashnikov name has also been used to merge the biggest Russian arms companies in order to save them from bankruptcy. Reportedly, Kalashnikov allowed his surname to be used for the operation out of pure patriotic spirit, and received nothing in reward.

The anti-gun front worldwide depicts Mikhail Kalashnikov as a bloodthirsty death merchant; we know better. He was a patriot who fought for his Country in the darkest days of human history, and as such he should be remembered and honored. 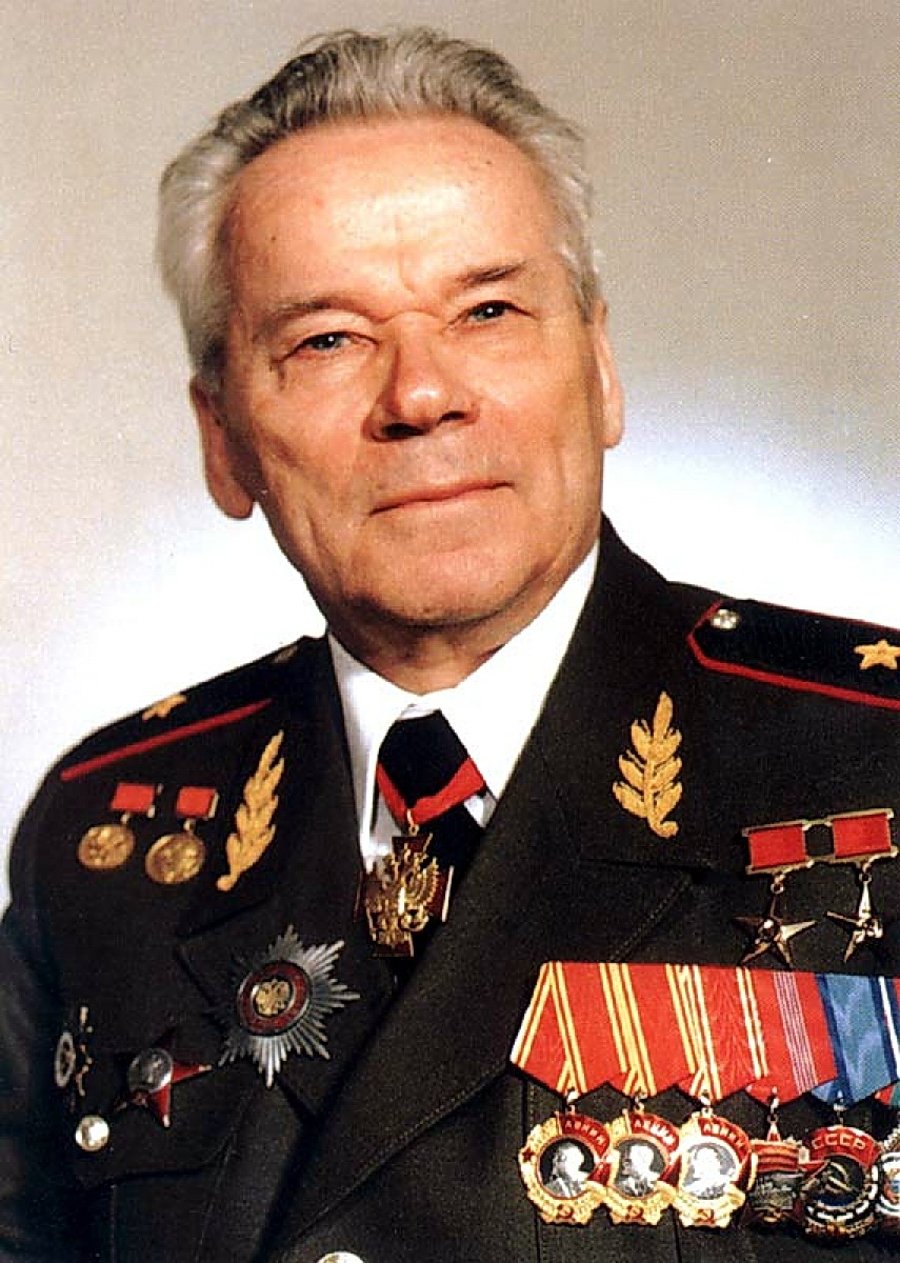 M.T. Kalashnikov Museum and Exhibition Small Arms Complex
Mikhail Timofe'evich Kalashnikov, 1919/2013
Subscribe to the Newsletter
Click here for more information on the topics:
KalashnikovAK-47 Kalashnikov
That might interest you too: 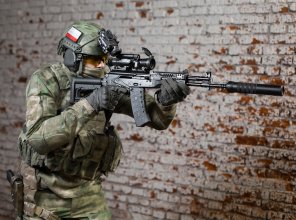 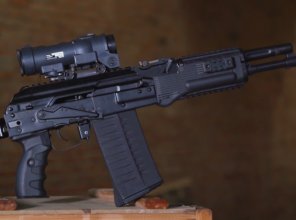 Demonstrated at the International Military-Technical Forum “Army-2018” – the largest  exhibition of weapons, military and special equipment in Russia – the new rifle is till under development but is based on AK-103 and AK-12 models. 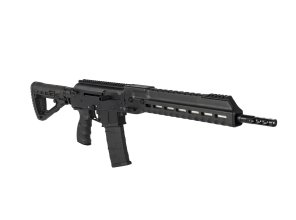 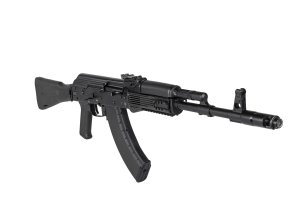 Kalashnikov Concern has announced a new TG2 semi-automatic shotgun chambered for the Russian .366TKM hunting cartridge and based on the AK103 Kalashnikov assault rifle. 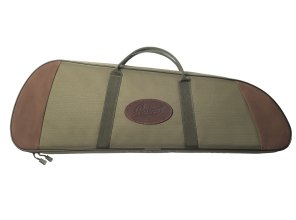 As part of the expansion of its product line, Kalashnikov group has developed a series of gun cases for civilian weapons. Cases are issued in two versions - "Baikal" for hunting weapons and "Kalashnikov" for sport and "tactical" weapons. 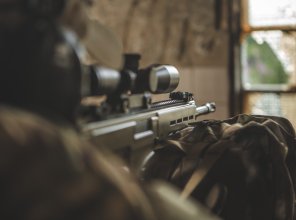 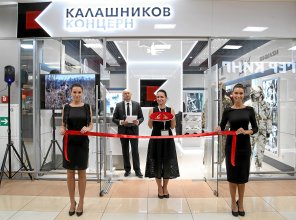 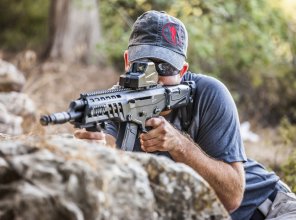