The latest addition to the Browning range, the BAR Mk3 Reflex HC, is the synthesis of all the improvements to a project that dates back to 1966 and that saw the BAR (Browning Automatic Rifle) become the best-selling semi-automatic rifle in the world with over 1,100,000 produced. Let's see together the features of this interesting rifle.

A contribution from Alessandro Cipriani / all4hunters.com11/02/2020

When it comes to the Browning BAR, every wild boar hunter takes his or her hat off. The reason is simple: it is the most widespread semi-automatic rifle all over the world (and there must be a reason), it has a reputation for being reliable and accurate, it is available in numerous models (including left-handed ones) which make it very versatile and has an extremely competitive price in the cheapest versions..

At the same time, in the high-end versions, it can satisfy even the finest palates, with selected wood furniture, hand engravings and gold inlays.

A life on the hunt for wild boar

The HC system cocking button allows you to cock the rifle just a moment before firing.

In 1966 the hunting version of the BAR was born. Bruce Browning, grandson of the legendary John Moses, and the engineers at FN Herstal, in Belgium, worked an entire year to develop this semi-automatic rifle featuring a gas-operated system derived from the 1918 Browning Automatic Rifle. From 1967, this gun began to spread among hunters not only in Europe, but also in the USA. It has many qualities: it's very well balanced, reliable, with a mild recoil, easy to use and accurate. In the 1970s and 1980s, the BAR confirmed its early success, quickly becoming the most widespread semi-automatic rifle in the world. 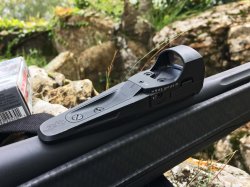 The Browning Bar Mk3 Reflex HC comes standard with a Kite Optics red dot – mounted in a very low position with respect to the barrel axis – and the HC safety system.

However, times changed and the BAR needed some improvements. Joseph Rousseau, a very prolific Belgian engineer working at FN, understood this very well and in 1993 the BAR Mk II was born. The BAR internals were completely revised to offer greater reliability – even if there wasn't any actual need for that, since my 1982 BAR never jammed. In particular, a simplified gas piston system was adopted and the lightweight version with aircraft grade aluminum alloy receiver appeared. The magazine release system was also improved and the magazine itself was modified.

Since 2000 the BAR lineup saw several new versions, with differences mostly on the aesthetic side as no mechanical improvements were needed. Composite materials were introduced for the stock, left-handed versions appeared. More refined and more easily adjustable sights were introduced too

In 2009, Browning launched the BAR Zenith, a high-end gun with very accurate finishes. The Zenith takes up the features that have always contributed to the success of the BAR while at the same time adding an important aesthetic value, with the possibility of choosing the wood grade and also the possibility of having engraved receiver side plates. 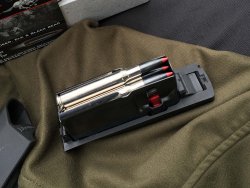 The double feed magazine has a capacity for four cartridges.

In 2014 Browning wanted to meet the needs of those who hunt with dogs, introducing a short barrelled version featuring orange inserts on the butt stock and fore-end, and a new "HC" (Hand Cocking) system. Much appreciated especially for its new cocking system, this version allows the gun to be carried with a chambered cartridge in total safety. We will also find the HC system in the gun we are going to examine.

In 2015 the BAR Mk3 version appeared, whose most recent and interesting model is the Mk3 Reflex HC, which will be the subject of our test.

First of all, let's see the improvements in the Mk3 series compared to the previous versions. In my opinion the development of a new trigger is the main difference that characterizes the Mk3 family: the adoption of the new "Super Feather Trigger” represents a great improvement, bringing the pull weight to 38-8 oz/1100 g against about 88 oz/2500 g of the previous versions.

The barrel was also improved: it is manufactured by cold hammering at the Herstal plant (Belgium) and has a larger diameter (0.66”/17 mm at the muzzle against 0.59”/15 mm of the older versions) and is fluted.

In the Reflex HC version it is 21”/53 cm long and muzzle threaded. 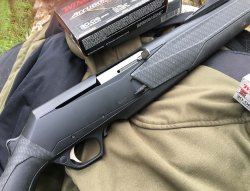 The essential elegance of the Browning Mk3 Reflex AC receiver.

Let us now examine the receiver. At the rear – therefore in ambidextrous position –  is the button of the HC system, which allows to move around in the wood in total safety after chambering a fresh round, since the firing pin is not cocked. Simply push the HC button forward to have the gun ready to fire. Stationary hunters won't see the point of this system, but it is evident for those who often have to move in the thick of the bush, with the possibility that some twigs inadvertently disengage the safety. With the HC system this is impossible, and in fact BARs with this system are already widely popular among those who follow their dogs in the woods.

SThe receiver top is drilled and tapped for scope mounts. The Reflex HC is not fitted with iron sights for a deliberate choice, as the rifle comes standard with a Kite K1 red dot sight. The only "defect", so to speak, is that when you go hunting you should never forget to bring a spare battery for the red dot, because if it runs out of battery you can go home....

LErgonomics and handling are excellent: the HC button is easily operated with both hands, as is the magazine release. The bolt release is on the right side only. 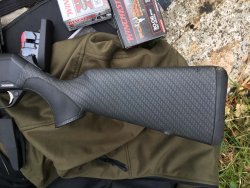 The stock is synthetic and features soft rubber inserts on the grip for a better purchase.

Handling is exemplary: the rifle shoulders and aims instinctively and the eye easily finds the red dot, that is mounted in a fairly advanced position (about a third of the barrel) and – above all – it is low. So low that Browning, for the Reflex version, has not even thought of fitting a height-adjustable cheek rest (available in other versions), precisely because the red dot is really low with respect to the barrel axis.

Weight distribution is excellent and the Inflex 2 type recoil pad helps to absorb the kick, that in the 30-06 caliber version is quite weak.

The stock is made from a synthetic material reminiscent of carbon fiber, and is fitted with soft rubber inserts both on the forend and on the pistol grip. These inserts improve the grip even with wet hands (who hasn't ever been caught in a nice rain shower while hunting?). 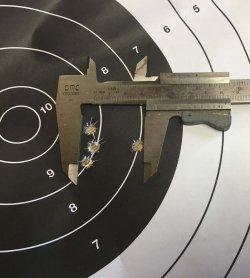 I had no problem getting familiar with the Browning BAR Mk3 Reflex HC, which as for controls and general layout is basically the same as the previous versions. The HC system button can be operated with a certain amount of force, but this is a good thing, as it excludes the possibility that it can be activated accidentally. You just have to get the hang of it. When hunting with expanded senses and tense nerves because a wild boar is coming towards you, operating the HC is instinctive and very quick.

The red dot Kite K1 is excellent: lightweight but at the same time rugged (it is also provided with an effective additional rubber armor), easily adjustable in brightness and above all mounted so that the classic instinctive shooting position we use with iron sights can be adopted even with this rifle. I repeat, it's absolutely instinctive – a praise to Browning technicians who have been able to find this solution that really allows for easy shooting, going against the trend that sees most red dots mounted on the receiver instead of on the barrel.

In order to test the qualities of the BAR Mk3 Reflex HC we went both to the range and hunting wild boar.

The rifle I tested was in .30-06 caliber, a cartridge that has many advantages for several reasons: first of all, availability – even in smaller gun shops there are always a couple of loads available at least. Additionally, the effectiveness of this cartridge – which with the right loads has excellent stopping power. And in any case, unlike many calibers that enjoy an ephemeral luck (at present it is the turn of the 9.3x64), the 30-06 is a guarantee, an "evergreen" that knows no setbacks. Ask boar hunters what caliber they use, and you will find that 60% and more use the .30-06.

Personally, to stay with Browning-Winchester products, I have been using Power Max Bonded cartridges with a 180-grain bullet for years. I prefer these cartridges both for their effectiveness and for the fact that, having the bullet with the lead core bonded with the bullet jacket, it hardly spoils the meat, retaining almost the entire initial weight after mushrooming and avoiding fragmentation into many (too many) small lead pieces that would ruin the game meat. 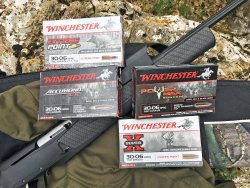 The cartridges used in the test. The best accuracy was provided by the 180-grain Extreme Point.

The most accurate ones, however, turned out to be the Winchester Extreme Point, that at 50 m produced a 1.13x1.53 in (28.8x38.8 mm) group, a very good result if you consider that 50 m is already a good engagement distance for a semi-automatic rifle, especially if you think that we used the red point for aiming, without magnification or a reticle.

As far as hunting is concerned, we took the BAR Mk3 Reflex HC with us on a wild boar hunt. Unfortunately, we couldn't shoot any boar – I know, it was more elegant to say that I had shot a boar and above all that I had killed it “on the spot”. However, I spent six hours holding this beautiful object in my hands. I looked for defects, and honestly I couldn't find any. I even found brilliant the forward position of the red dot, criticized by some, since it allowed for a really low mounting with respect to the axis of the barrel.

Improving an excellent product is not easy, and this is generally not done by already successful companies, but by competitors. Browning is a different story – here we have a company that has been able to question itself about one of its successful products and to introduce new, improved and more functional versions over the last few years.

And with the BAR Mk3 Reflex HC the result is surprising, because in my opinion Browning has managed to surpass itself, with a product that is halfway between tradition and technical innovation.

Subscribe to the Newsletter
This article is also available in this language:
DEIT
Click here for more information on the topics:
BrowningHunting RiflesRiflesWild boar.30-06 SpringfieldSemiautomatic rifles
That might interest you too: 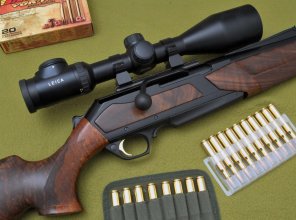 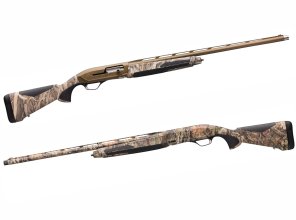 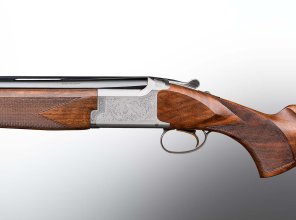 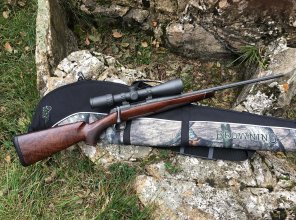 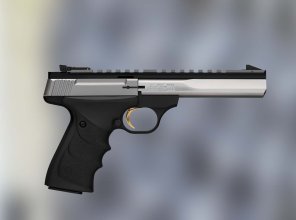 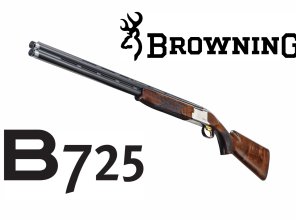 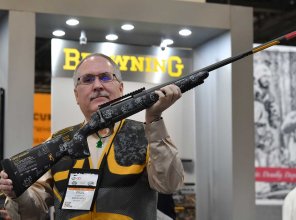 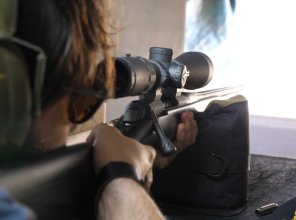