Two American military guns enthusiasts and experts have ventured into a hands-on reinterpretation of the original design that led to the development of the M16 assault rifle. The gun has been redesigned with the most modern technology available today in mind and is marketed exclusively by Brownells, an American company not new to this kind of commercial operations.

A contribution from Giorgio Brancaglion03/26/2022

In our wanderings in search of curiosities at the IWA in Nuremberg we had the opportunity to meet Ian McCollum, popular host of the "Forgotten Weapons" website and channel that on YouTube explains and tests rare and interesting firearms. But this time Ian was at the exhibition to present a contemporary project, a Black Rifle that claims a direct connection to Eugene Stoner, one of the great names in modern gun technology. The project is manufactured by Brownells, an American company that for some time now has been carrying out a real operation of gunsmithing philology, proposing replicas of historical weapons for American military history fans, such as the M16 in its original version and even the prototype developed for Armalite, which we told you about some time ago.

Let's start from the curious acronym that distinguishes this weapon: WWSD2020, which stands for “What Would Stoner Do 2020”. The reference to Eugene Stoner, the American designer who created the M-16 assault rifle in the middle of the last century, is clear and explicit. The question inherent in the sentence, on the other hand, refers to technological evolution, which in these seventy years has made remarkable strides forward: "How would Stoner's design have changed if he had 2020 materials and technologies at his disposal?"

The answer to this question is the WWSD2020 semi-automatic rifle in .223 Remington caliber, created by a team composed of Karl Kasarda and Ian McCollum, two American gun experts well known thanks to their videos posted on the web by their InRageTV channel. Started in 2017, the project of the two enthusiasts was simple, yet extremely ambitious: to bring back the AR-15 to its roots by using today's materials and industrial manufacturing techniques. Not just a restyling, but a philological reinterpretation of the original project, which to tell the truth was already very modern for its time, envisaging the use of main parts made from aluminum and fiberglass. In 2020 the new semi-automatic rifle, manufactured with the collaboration of KeArms and Brownells, becomes reality and the WWSD2020 is born. Today polymer and carbon fiber have supplanted, at least in part, aluminum and fiberglass.

The one-piece lower receiver of the WWSD2020 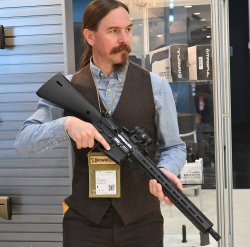 Franco Palamaro, © F.PALAMARO
The main feature of the WWSD2020 is the lower receiver that also integrates stock, grip and magazine well.

The most revolutionary component of the weapon, produced by KeArms, is the lower receiver, which is not only made of polymer, but is a single piece that also includes the stock and grip. This allows for the elimination of at least five parts of the firearm that are no longer separate (such as, for example, the pistol grip or the recoil buffer tube). Housed within the lower, designated KP-15, is an SLT-1 Sear Link trigger assembly that provides a crisp and lightweight trigger pull. Also integral is the magazine well that accepts standard 30-round AR-15 type magazines. The bolt and bolt carrier are chromed, offering corrosion resistance and ease of cleaning that were certainly not strengths of the original M16.  It is worth noting that the WWSD2020 has no forward assist. There are also a few details that simply couldn't have existed or weren't considered in the mid-1960s, but are a must on a modern Black Rifle today, such as fully ambidextrous controls, a Picatinny rail for optics, a Match-type trigger, and a carbon-fiber handguard with M-Lok slots. All for an unloaded weight of just 2.25 kilograms.

The pencil barrel of the WWSD2020

One of the problems that occurred in the original M16 during sustained fire was that the relatively thin barrel tended to overheat and flex slightly, reducing the accuracy of the weapon and shifting the point of impact several inches in unpredictable directions. This was an expected problem, but it produced rather serious effects. Today the technology to solve this problem is available on the WWSD2020 and after a series of practical tests, Karl and Ian decided to mount on the carbine a 16-inch (40.64 cm) barrel with pencil profile manufactured by Faxxon Firearms, an U.S: company specializing in high quality components for long guns and handguns. The Faxxon barrel has been chosen because it is the lightest of all barrels with the same performance: in fact, it weighs 568 grams and is equipped with a titanium flash hider. The gun has no iron sights, but thanks to the Picatinny rail it can mount any kind of conventional or electro- optics.

The WWSD2020 semi-automatic rifle is sold exclusively by Brownells at a price of $1699 in the US. It will be interesting to get our hands on this superlight rifle, as soon as it will be available. For now, let's be content to watch the video below where Ian McCollum explains its features. 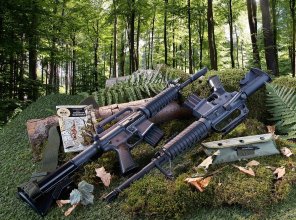 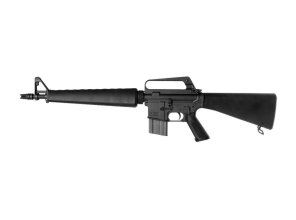 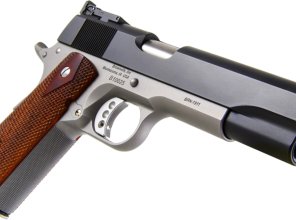 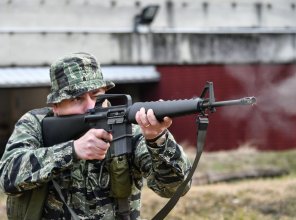