Originally developed for a government contract, Steiner is now offering the S432 and S332 optics on the civilian market. These short prism sights with fixed magnification are particularly suitable for semi-automatic rifles. We have tested the Steiner S432 Battle Sight extensively and we introduce it to you here on all4shooters.com. Watch our video too.

In the USA they are called battle sights: they are compact optics with a fixed zoom that are tailored more to the requirements of the police and army than to sports or hunting. Such battle sights may not be as universally used as variable rifle scopes. Being a robust military version, however, they are also much lighter and much shorter than a "small" tactical riflescope, providing many advantages too . On top of that, they are cheaper to buy: a battle sight of the new Steiner 's S series is available from 1149 euro. By way of comparison, the proven Trijicon ACOG costs around 1800 euro, depending on the version, and is therefore already one of the most expensive battle sights on the market. Rifle scopes with a zoom factor of 1x to 8x, which were also developed for the military, easily cost well over 2,500 euro. But now let's move on to our test product. 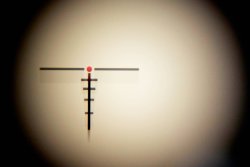 Marcus Heilscher
With Steiner's Rapid Dot reticle only the dot is illuminated. The marks below reach up to 700 m.

In addition to its short design, the 1.77” / 45 mm eyepiece of the Steiner S432, which is also extraordinarily impressive for a battle sight, immediately catches the eye. When looking through it, the sharp, high-contrast and true-color image is pleasing right up to the edges . The lenses as well as the durable aluminum alloy housing with M-LOK adapters and integrated Mil-Std-1913 (Picatinny) mount base make a high-quality impression – you don't have to be afraid of quick firing strings. The S432 556 version we tested came with a reticle designed for the SS109 cartridge (5.56x45 mm, 62 gr FMJ). Alternatively, Steiner also offers a version with a NATO reticle matched to the 7.62x51 mm cartridge. Steiner also offers the S332 model with 3x magnification, which is almost identical in construction but about 50 grams lighter. The Rapid Dot reticle offers stadia marks at 100 m intervals: at 200 and 700 m, the upper and lower ends of the vertical crosshair are used. For 300 to 600 m there are suitable crosslines. 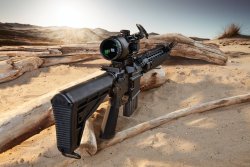 Steiner illuminates only the dot of the S432, not the rest of the reticle, unlike previous models like the M332. Its brightness can be adjusted in 5 settings. At the highest level, the dot also shone against the sky and on a bright background when the sun was shining. In addition, there are 3 brightness levels for minimal light or night vision devices. The brightness can be adjusted very easily via a knob on the left of the housing with clearly noticeable click stops, plus a "complete off" setting between the 8 brightness options. At around 3.15” / 80 mm, eye relief is very pleasant for relaxed aiming . in comparison, some Battle Sights from other manufacturers offer an extremely short eye relief, which more or less forces the user's nose “on the cocking lever" of rifles like the AR-15. Moreover, the eye box of the Steiner S432 is relatively insensitive, so that the shooter has some leeway with the positioning of the eye behind the optic before only seeing black. The particularly ample field of view of 11.8 m at 100 m distance impressed us in the test . The S332 with 3x zoom factor even offers a field view of more than 14 m at 100 m distance - these are great values. 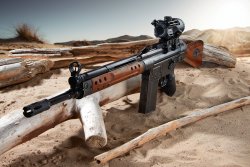 Marcus Heilscher
Short, sturdy, with a large field of view and not too heavy: the 4x Steiner S432 on a Sabre Defence rifle.

For testing the new Steiner battle sight we used a G3 clone from Sabre Defence and an Oberland Arms OA-15. The S432 was installed on the G3 using a low UTG mount. The OA-15 – like most AR-15s – came with a Picatinny rail integrated into the receiver. With the OA-15, the height of the factory-supplied Steiner mount was perfect even without the (supplied) riser . The Sabre Defence would have benefited from a cheekpiece.


Our test: the rifles were fired at 50 m off-hand and at 100 m on a rest . Due to the large field of view, the target can be found very quickly despite the 4x magnification, but at short ranges well below 50 m it becomes somewhat more difficult. There was nothing wrong with accuracy: with 20 7.62 MEN surplus cartridges shot in quick succession, the holes were a maximum of 70 mm apart, 11 of them 23 mm apart. Five shots of RWS Short Rifle Speed Tip Professional hunting cartridges (150 gr) produced a group of 41 mm at the same point of impact. The somewhat scratchy 169 oz / 4800 g military trigger made it difficult to achieve optimal results, much more than the comparatively low magnification and the small sized but beautifully sharp dot of the Rapid Dot reticle.

All in all, the S432 from Steiner is a well thought-out, optically and mechanically well-processed and stable sight for sports rifles, yet lightweight at just over 600 grams. If you are going for a 4x zoom, you should definitely take a look, because for the price called you get a technically excellent and very sturdy product, which is very suitable for medium ranges.


Further information about the Steiner S432 Battle Sight can be found directly on Steiner Optik website .

Subscribe to the Newsletter
This article is also available in this language:
DEIT
Click here for more information on the topics:
Steiner OpticsTactical
That might interest you too: 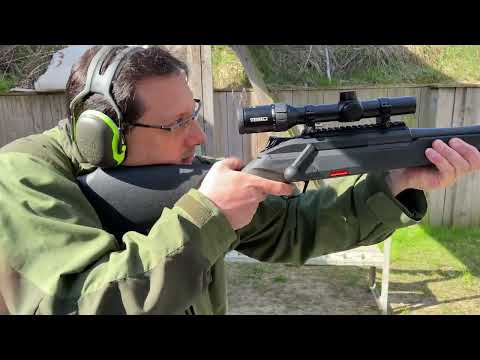 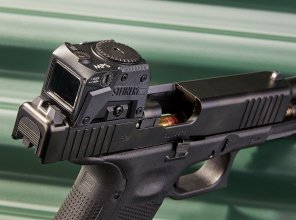 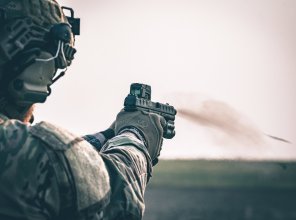 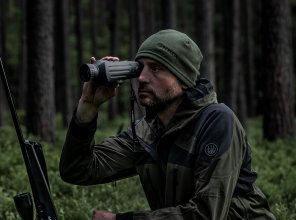 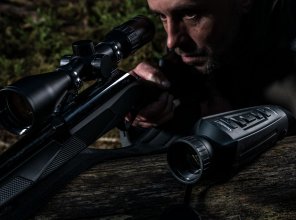 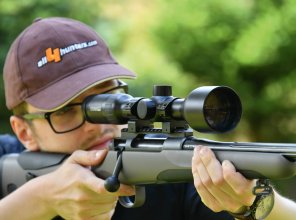 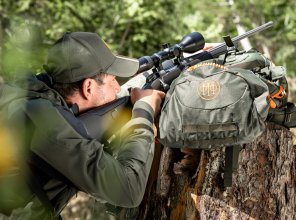