MKM Fara, the "little one" of the Mikita family

A knife for daily carry with a small blade and no lock. It doesn’t sound so interesting, but it is very much so - in particular for some countries where carrying knives with one-handed opening and any block on the blade is not allowed. More than this, it's beautiful and very well crafted.

A contribution from Giorgio Brancaglion / all4shooters.com04/24/2019

We already talked about the collaboration project between MKM-Mikita Italian companies. Today we are  talking about the first knife of the series, designed in collaboration with Mercury. The knife is called Fara, a peak in the province of Pordenone, Italy. 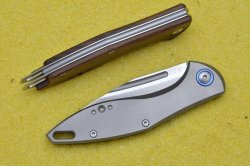 G.B., © G.B.
The opening groove on the blade is masterfully executed. Note the precise processing of the bolsters on the version with wooden grips.

The designer of this MKM knife is Lucas Burnley, an American knifemaker based in Albuquerque, New Mexico, who in addition to being a "custom" knifemaker can also boast several collaborations with companies such as CRKT and Böker. He defines his own "post tactical" style by mixing typical tactical knives designs with the more classic ones of the American tradition. The MKM Fara is a small-medium sized folding knife – what is generally called an EDC (every day carry) knife, a more theoretical than practical definition, since in many countries carrying a knife without a justified reason is explicitly prohibited. 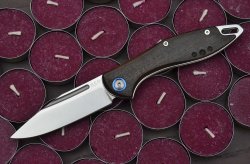 G.B., © G.B.
The MKM Fara in the version with Santos handle, an extremely resistant tropical wood with a pleasant grain.

In some countries, anyway, it is possible to carry knives even without having a specific and demonstrable reason, even if some limits are placed on the size and characteristics of the cutting tool. In Germany, for example, it is allowed to carry folding knives with a blade up to 3.5” / 90 mm long as long as they cannot be opened with one hand and are equipped with an active blade lock (liner lock, frame lock, ring nut). Knives with one-hand opening and blade lock can be bought and held freely but not carried.

In Britain the law is similar: carrying knives with a locking system and a maximum blade length of more than 3 inches (76 mm) is a no-no.

As we will see later, the MKM Fara was actually designed to be sold without any problem in countries such as Germany and England.

We asked Lucas Burnley, designer of MKM Fara, to tell us something more about this project:

Did you find it difficult to design a friction folding knife, considering it was new to you?

Actually I designed the Fara with a liner lock system. It was Mercury that realized the potential of the Fara as a friction knife and used their mechanism on my design. This is the best part of collaborating: to see how a knife concept is developed and which direction it takes.

In terms of design, what is the biggest difference between a folding knife and a liner lock knife?

Apart from the type of locking system, I would say that the biggest difference is the use you make of it. Liner lock knives are very sturdy and designed for lightning-fast opening and heavier use. I suppose that those who choose friction knives are more interested in the pleasure of using them and less in the opening speed. 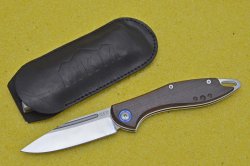 G.B., © G.B.
The Fara is sold with a leather sheath complete with a belt loop, an original solution considering the lack of clips.

As we said, the Fara is a relatively small knife, with a 3” / 76 mm long and 0.09” / 2.5 mm thick blade (so perfectly within the British limits), with a total length of 6.9” / 176 mm and a weight ranging from 75 to 90 grams , depending on the material used for the handle and bolsters. The MKM Fara has a blade with clip point profile characterized by the long opening groove on the left side only, made with great care. A Böhler M390 Microclean steel was chosen for the blade, hardened to 50 / 60 HRC. The blade is satin finished, the factory sharpening is excellent.

The blade processing is excellent, with a very homogeneous satin finish and the crisp opening groove is on par with an artisanal knife.

The grip has a very sinuous and clean line, thanks also to the lack of the "usual" clip which is not so indispensable and often interferes with a correct grip. The three-point motif carved into the grip is original, counterbalancing the blue ring around the titanium rotation pin, the symbol and recurring theme of the MKM knives. 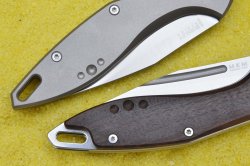 G.B., © G.B.
The three milled points on the grips add a chic tone. Note the different solution adopted for the strap hole: solid titanium or on the steel plate.

The Fara is available with titanium, black anodized Anticorodal T6 aluminum, olive wood and Santos mahogany handle. In the versions with wooden handle the bolsters are stainless steel. The stainless steel screws are Torx type. On the rear of the handle is an elliptical hole for the safety strap. The variety of materials used means that the weight of the Fara can range from 2.3 oz / 65 g for the version with aluminum handle to 3.2 oz / 90 g for the titanium handle version.

The knife requires some firmness to be opened and this is right and proper: it opens with a very noticeable snap and without any scratching. Even closing, which requires as much firmness, is fluid and with no scratching.

As we said, the Fara does not have a clip but is shipped with a black leather sheath with belt loop, an original solution not without some elegance. Given the really excellent level of workmanship and the materials used, the price – which for the most expensive version (the one with titanium handle) is 160 euro – is absolutely reasonable.

Subscribe to the Newsletter
This article is also available in this language:
IT
Click here for more information on the topics:
Consorzio Coltellinai di Maniago (Maniago Knife Makers)KnivesAccessories
That might interest you too: 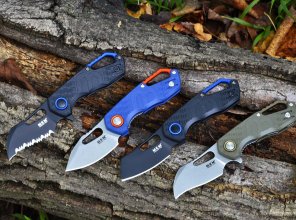 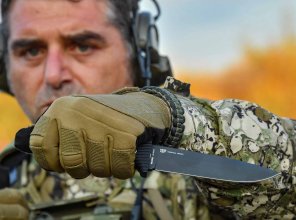 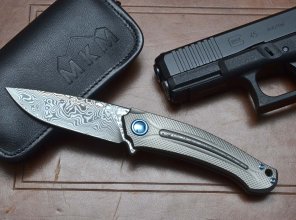 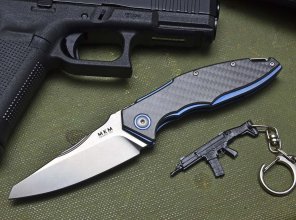 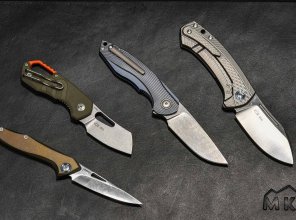 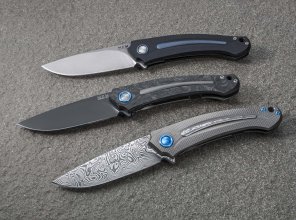 Consorzio Coltellinai di Maniago01/19/2019MKM knives at SHOT Show 2019: here's where you can see them 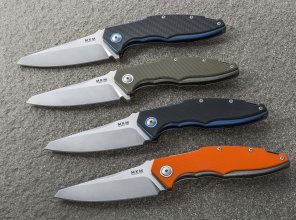