The Industry Day at the Range 2019: our personal insights of what’s new on the market

SHOT Show 2019 / Industry Day at the Range: One day before the SHOT Show opens its doors we had the opportunity to check and testfire many of the new products at the so-called Industry Day. The location - a shooting range in the desert - is 50 minutes outside Las Vegas City close to the city of Boulder, Nevada. We’ll give you our personal first insights of what’s new for 2019.


A contribution from Alexander Losert/ all4shooters.com01/22/2019 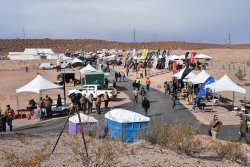 Franco Palamaro, © F.PALAMARO
The Industry Day at the Range is part of the SHOT show like gambling is part of Las Vegas. Of course, we will be there again!

Wind, dust and a new minigun – these are our first impression from our editor Alex. The Industry Day at the Range belongs to the SHOT Show just as gambling belongs to Las Vegas. Crowds come in the player's paradise not only from the United States, but also from Europe or Asia, to test in the flesh the products offered by the numerous manufacturers. The friendly way of dealing with each other is hard to describe, but it’s simply great. All visitors have a common hobby and a passion for everything related to firearms.

This year, however, the wind blew really bad in the face – even if in a purely meteorological sense. It is usually windy in Boulder City, and a stiff breeze slapped visitors in the face. But that did not stop anyone from firing across the arsenal of guns, rifles, pistols, revolvers, and more.

Everyone had personal highlights from his/her own team, but we share ours with you....

The team of all4shooters.com: our personal highlights of the Industry Day 2019! 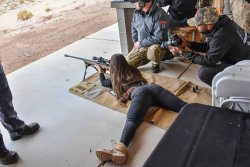 Franco Palamaro, © F.PALAMARO
Among all the new rifles, shotguns, pistols and revolvers, each of us had his own product highlights.

"My two personal highlights at the Industry Day at the Range were the Savage High Country bolt action rifle and the impressive Leupold Mark 5 HD riflescope 7-35x56. The Savage M110 High Country pleased me with the convincing  ergonomics of the 'AccuFit' camouflaged synthetic stock and extremely resistant, bronze-colored hard material coating on all metal components. Available in eleven popular calibers from .243 Winchester to .300 Winchester Short Magnum with 22" and 24" barrel, this rifle intended for long ranges can also shot very fine thanks to the good trigger qualities and made it easy to hit the target 900 yards away. The Leupold Mark 5 HD 7-35x56n riflescope with 35 mm tube diameter is a rugged precision long-range optic with consistent adjustment mechanisms and a brilliant, crisp, high-contrast target image. Obviously, various reticles such as Horus Vision H-59 or Tremor 3 are available," says Stefan Perey.

For me, of course, it was the awesome minigun at the RUAG Ammotec booth and some other guns like the Springfield Armory 911 now available in 9mm Luger caliber, or the United Defense AK-103 – an AK-47 derivative available with different barrel lengths in the US: classics never die. Also, the new caliber by Winchester, the .350 Legend, which according to the manufacturer should fit all popular .223 platforms, is an outstanding new product. And, and, and... You couldn't even notice how fast the time went by. Accordingly, the lunch break was also short – otherwise we could have missed something important, or shoot less. 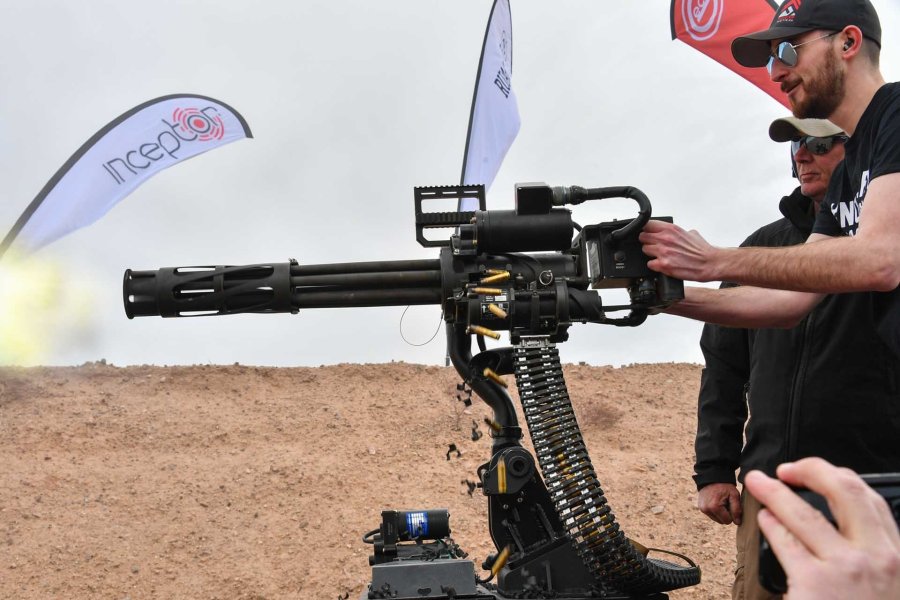 Franco Palamaro, © F.PALAMARO
The Industry Day at the Range 2019 really had a lot to offer. Here: the awesome minigun in action at the RUAG Ammotec booth. The new Norma and GECO ammunition for the US-market was also available for test shooting.

Industry Day at the Range 2019: About weird shotgun constructions and other long rifles 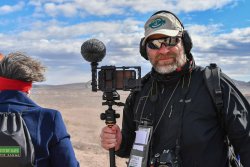 Franco Palamaro, © F.PALAMARO
Our colleague Matthias has a clear opinion on the subject of shotguns. What secretly does he think of the new Kel-Tec KS7?

As our team member Matthias puts it in emotional words: “Shotguns - those things with side-by-side or over-under barrels, right? At best, even with a tubular magazine under the barrel, if the respective model works as a semi-automatic or pump-action gun. So far, so well-known – but Vegas would not be Vegas if every year you could not see some new weird gun design that brush vigorously against the grain. This is also the case of the US company Kel-Tec, that with its unusual products is the delight of those who love uncommon designs. Just like the Kel-Tec KS7 shotgun: a pump-action gun, but in bullpup form, so with a shortened system that can be loaded and ejects empty shells from underneath. All this garnished with an exterior that takes the polymer boom into account and somehow looks like as if it was intended for the next John Wick movie: AR-15 style pistol grip, carrying handle on top and a slanted fore-end that reaches up to the muzzle.” 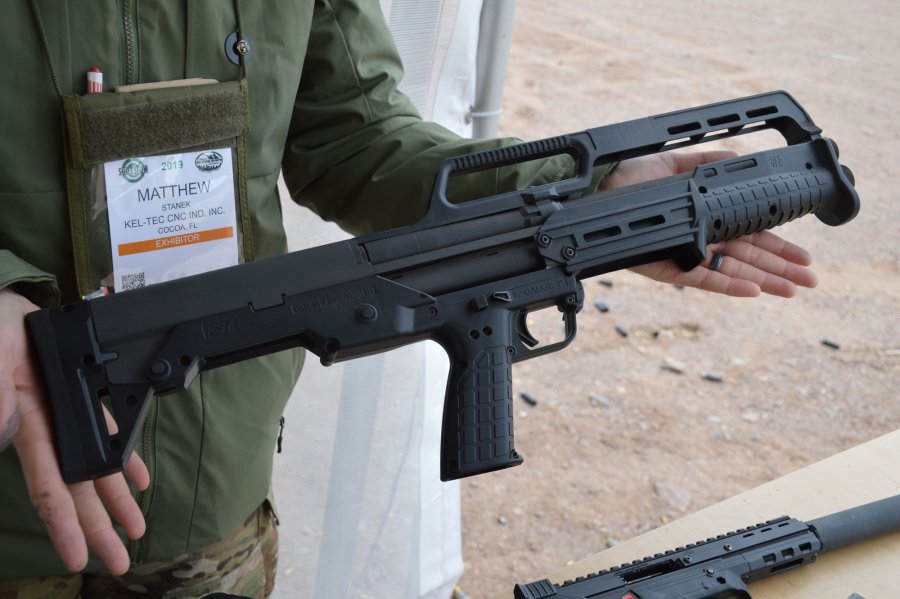 Media Day at the Range 2019 / A really special shotgun design: the Kel-Tec K7S is a semi-automatic shotgun in Bullpup form with an AR-15 style pistol grip

Have we already said that this is an extremely straightforward thing, that it can be loaded quite easily, that it shoots pleasantly, and that, in the end, it's just fun? 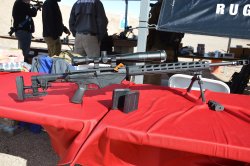 A dream in black: the Ruger Precision Rifle for long range shooting - presented at the Industry Day - one day before SHOT Show 2019

Ruger is one of the 20th century classic US-companies in the gun sector, influenced by the personality of its founder, William Batterman Ruger, and thus in a bit of a crisis when this outstanding personality died at the beginning of the 21st century. In the meantime, they recovered and even presented the first products of the newly created Custom Shop at the SHOT Show, including a pistol bearing the name of none other than the US-sport shooter Doug Koenig and that was explained by him in detail in his own sympathetic professionalism. But the real hit on the market that Ruger has recently landed in is the Ruger Precision Rifle , a long-range rifle which is already being manufactured in its third year of existence. And just from this vey interesting product, which is characterized by its low price as well as by good performances and features, now comes out a new version in .300 Winchester Magnum and .338 Lapua Magnum:

Have we have already said that the gun is shooting quite good and that it promises to continue the success story of the Precision Rifle as well as of the company itself? 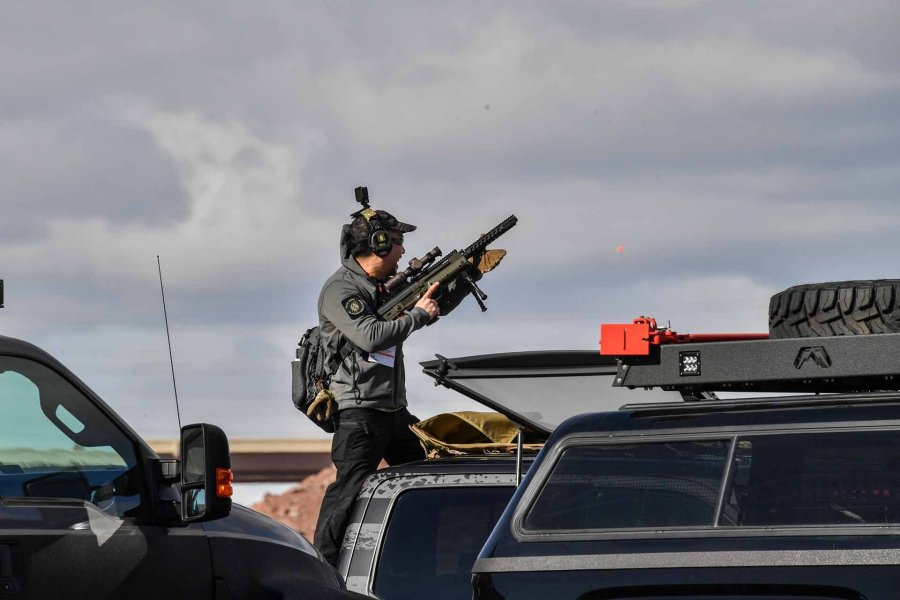 Franco Palamaro, © F.PALAMARO
All in all, the Industry Day at the Range was informative, entertaining, inspiring and a lot of fun for all participants.

Spectacular guns at the Industry Day at the Range 2019 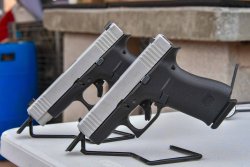 And which were the personal highlights of our team member Tino? "Of course it would be too early to decide which is my personal highlight of SHOT Show 2019 on the first day, but there were already some novelties and classics to admire. Among the highlights of the first day for me is the Glock 43X . A handy pistol in my favorite caliber 9mm Luger. Slim, but still equipped with 10 + 1 cartridges. Visually, it also stands out for the silver-colored slide, thanks to a so-called nPVD coating. The usual good features with low barrel axis and high reliability are also found in this new ‘Cross-Over’ model. With the Glock 43X, the Austrian manufacturer has managed to bring to market a slim 9mm Luger pistol that can fit even larger hands. Well done Glock!" 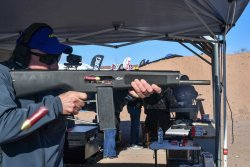 Not new, but certainly spectacular is the Sol Victus Arms AA12. "A fully automatic shotgun in 12/76 ga. It is fed from a 8-round tubular magazine or a 25-round drum. The fairly low rate of 300 rounds per minute, and the straight-in-the-shoulder push let the AA12 dominate the recoil quite well. Although this shotgun will most likely not be accessible to civilians in most countries around the world and thus remains a marginal phenomenon, we were thrilled to distribute many lead bullets over the sprawling Nevada desert!”

Far too fast, the day on the range also came to an end, but the mood, despite the sand between the teeth, the many kilometers we went - all of which on foot - was consistently good. In the shuttle-bus we then started talking about the individual guns, which ones we liked most, which calibers for sports, hunting, long-range, etc. are the best choice in our personal opinion. As far as guns are concerned, here in the United States it is a whole different thing, which is really refreshing. I can hardly wait until the next Range Day takes place next year... and SHOT Show 2019 is just starting tomorrow, with many more new and interesting products... HURRAY!!

You’ll find more videos about the Industry Day at the Range 2019 in our Facebook channel!


The previous day we were invited to another exclusive event: the SIG Sauer Premier Media Day 2019. Here are the direct links to all the new products for 2019 we could find there for you:


Subscribe to the Newsletter
This article is also available in this language:
DEIT