Test: Trigger tuning with Fluna Tec Gun Coating – Is that possible? We tried it on a CZ Shadow 2 and a S&W M686!

It sounds almost too good to be true – to be able to reduce a handgun's trigger pull weight very simply and quickly by using Fluna Tec Gun Coating. Whether there is any truth in the myth, we wanted to get to the bottom of it with incorruptible measuring methods. 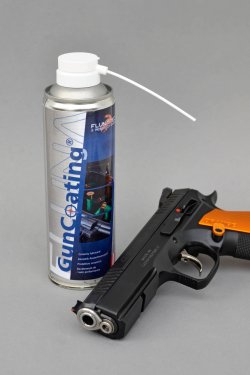 Tino Schmidt
We tested whether the trigger can be tuned with Fluna Tec Gun Coating on a CZ Shadow 2.

If you believe some shooters or gunsmiths, Fluna Tec Gun Coating should be able to reduce trigger resistance simply by applying or spraying it on. Certainly, oils or, as in the case of Fluna Tec, a high-performance ceramic coating, can be used to change the tribological conditions and thus the friction of mechanical parts. But is there really a difference to be seen or a practical benefit to be derived from this?

What is Fluna Tec Gun Coating?

Gun Coating, which is available both as aerosol spray and in a dropping bottle, is probably the most popular product and probably also the bestseller of the Austrian manufacturer Fluna Tec. It is not a new type of gun oil – strictly speaking it has nothing to do with oil at all. It is a liquid high-performance ceramic. Since 2009, Fluna Tec und Research GmbH has been mainly concerned with the coating of surfaces in mechanical and plant engineering. In wooden boards gluing technology it is important that the glue does not stick to metal discs. Therefore, an appropriate coating had to be developed that prevented that reliably and efficiently. Because the managing director of Fluna Tec Research GmbH, Manfred Pilz, is himself a passionate hunter, the idea of offering such a protective ceramic coating as a user-friendly care product for firearms was born in him at a very early stage. The Fluna Tec technicians then developed a liquid and easy-to-handle ceramic. Today the young company supplies its products to 43 countries. Many firearms manufacturers now purchase this new type of high-performance ceramic from Fluna Tec, which can be used not only as a lubricant but also for the care and conservation of guns. Among them are such well-known companies such as Anschütz, Blaser, Mauser, Oberland Arms, Rössler, J.P Sauer & Sohn, Steyr, STP-Prommersberger, Umarex, Voere, to name but a few.

Truth or myth? We tried out Gun Coating on the trigger 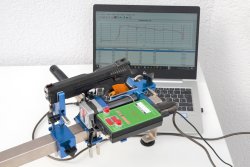 Tino Schmidt
Without exact measuring methods our comparison would certainly not be possible. The Trigger Scan System has been invaluable to us.

We were particularly interested in the promised reduction of the trigger pull weight. We have been using the Trigger Scan System for some time now to analyze trigger resistance and its characteristics, and to display them in diagrams. The results are more meaningful from a popular scientific point of view than if we had carried out the tests with a simple trigger scale. As test guns we used a CZ Shadow II Orange pistol with single-action/double-action trigger and a Smith & Wesson 686 KeyMod revolver from the Club 30 gunsmith Paul Frauenberg from Luxembourg. We decided on three test procedures:

In the first part, shown in red in the diagrams, 10 measured values were recorded with completely oil and fat-free contact surfaces of the mechanical parts. For this purpose, the parts were washed vigorously with brake cleaner and then left to dry briefly. Surely it hurts your soul as an expert shooter to use the moving parts "bone-dry" without lubrication, but you had to jump over this shadow. The double action broke at 4594 grams here, the single action at 1497 grams. 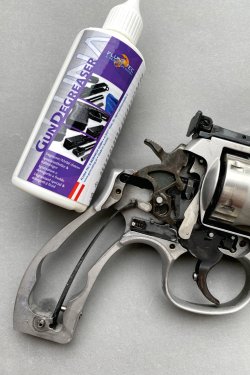 Tino Schmidt
Of course, the trigger parts had to be degreased before the respective measurements were taken. Fluna Tec also offers the Gun Decreaser, a suitable cleaner for this purpose.

Afterwards the trigger parts were well wetted with a conventional oil and the test gun was put back into the Trigger Scan System. The difference was clear. The DA trigger was already 489 grams lighter, at 4105 grams. With the single-action it was only 97 grams lighter, at 1400 grams. In the diagram you can see that the blue curve runs quite parallel and thus with the same characteristics below the red curve.

The parts were then cleaned again with plenty of brake cleaner. After drying, the Fluna Tec Gun Coating was applied and, as recommended in the instructions, we waited for about 30 minutes. After the ten completed measurements with the testing device, the average of all measurements in double-action mode was 3925 grams, which is another 180 grams less than with conventional oil. We were astonished that the results would change again like this. But in single-action mode, the difference was only 43 grams. Here, the differences in trigger weight were generally not as high, which is probably due to the smaller overlapping engagement between the trigger components when hammer is cocked.

We repeated the experiment, at least in double action mode, with the tuned Smith & Wesson revolver. Of the initial 4594 grams, 4,091 grams were left over by the oil. Now, at the latest, the biggest doubters should realize that a few drops of oil not only give the trigger a longer life, but also a lower resistance. A further trigger pull weight reduction of only about 50 grams could be achieved with the S&W revolver compared to the CZ pistol with the parts lubricated using the Fluna Tec Gun Coating.

The ingeniously simple improvement of the trigger behaviour by means of lubricant is therefore probably also different depending on the type of gun. A comparison with other guns would certainly have been revealing and the question of how the liquid ceramic performs over a longer period of time compared to conventional oil is also interesting. Nevertheless, our experimental short-term testing should already provide useful findings for firearms enthusiasts, hunters and shooters.

Our Trigger Scan measurements with and without gun coating:

Our conclusion on trigger tuning with Fluna Tec Gun Coating

With Fluna Tec Gun Coating a reduction of the trigger weight can be achieved quickly and easily by pressing the spray can head with the index finger. Here the motto "the proof of the pudding is in the eating " applies, and with prices of 13.90 euros for the 100 ml dropping bottle and 21.90 euros for the 300 ml spray can, any shooter can dare to try the experiment himself/herself, given the manageable investment.

You can find our test of the CZ Shadow 2 Orange here.

Subscribe to the Newsletter
This article is also available in this language:
DEIT
Click here for more information on the topics:
AccessoriesTest
That might interest you too: