The CZ Shadow 2 Orange was presented in 2019. Here we take a closer look at this promising all-steel pistol that features improved accuracy and a tuned trigger. Read on about to learn about our impressions. 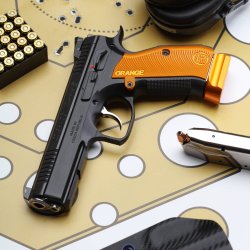 ULI GROHS, © ULI GROHS
With the Orange version of the Shadow 2, CZ has further refined its successful all-steel pistol.

As with the Shadow as well as with the CZ 75 Tactical Sports equipped with a thoroughbred SA trigger, with the “Orange” versions Ceská Zbrojovka offers improved versions of the standard models. Now it's the turn of the Shadow 2.

It is no big secret that the Shadow 2 is often found not only in the IPSC Production Division, but generally in the hands of large caliber shooters. There are good reasons for this, such as the solid all-steel construction with the ergonomic grip that even small hands can cope with. The trigger can be used "out of the box" in both double action and single action mode. The DA/SA trigger with additional manually operated safety also gives more options for the sports shooter. Last but not least – and for many, probably the most decisive point – the price of 1400 euro, which gives the Czech sporty gun an unbeatable price-performance ratio. There is actually not much more that could be done better, and we were all the more excited to see what else we could come up with for the Orange version. 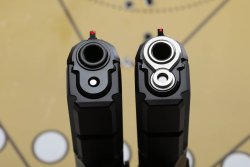 ULI GROHS, © ULI GROHS
The Shadow 2 Orange (right) has a relatively tight bushing that is intended to improve accuracy.

The most striking feature of the gun are the orange grips with a color-matching magazine floor plate made of aluminum. It's a solid all-steel construction pistol weighing almost 1350 g and featuring a 4.8”/122 mm barrel. The magazines holds 19 cartridges in 9mm Luger caliber. Typical for the CZ 75 is the double action/single action with manually operated safety, that is also larger in the Orange.

Sights are the same as on the standard model – personally, we would have liked a micrometer sight from the in-house accessories shop. Some parts of the Orange model are hand-adjusted.

An interesting feature of the newcomer is the muzzle bushing, that according to the manufacturer is supposed to increase accuracy. As in all Orange versions of the existing models, the main components like frame, slide and barrel are fitted by hand. The barrel has even been fully polished, which according to the manufacturer should also provide better accuracy. As said, the hand fitting is quite noticeable. The slide of a standard Shadow 2 has noticeably more play between than the Orange version.. 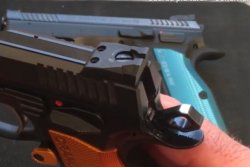 Sights are the same as on the
standard model.

With the Shadow 2 Orange, CZ has once again refined its successful all-steel pistol. Accuracy has been slightly improved, as have the trigger qualities.

Whether this is worth around 2399 euros and thus 1050 euros more than the original price, is a matter for everyone to decide for themselves.

Subscribe to the Newsletter
This article is also available in this language:
DEIT
Click here for more information on the topics:
CZ (Česká Zbrojovka)Pistols9 mm9x19 mm (9 Luger)
That might interest you too: