The Pattern 1853 Enfield Rifle is one of the most important military rifles ever, and the Italian firm Davide Pedersoli reproduces one of the finest modern replicas available on the market

Produced for the target shooters and re-enactors of the world this reproduction of one of British gunsmithing’s historical classic rifles, Davide Pedersoli paid particularly attention to detailed features, dimensions and all the garnitures and the identification marks as on the original rifles.The Enfield rifle was the first English rifle which was a true revolution in the individual soldier’s armament. This rifle introduced the rifled barrel and barrel band, unusual for the new “smaller” caliber being introduced, which for that time, had never been used in an Infantry rifle.

It is recorded that within a few regiments such as the Rifle Brigade and the 68th Durham Light Infantry, the first Pattern 1853 rifles were used in Crimea alongside the previous models 1839 and 1842, still with the large .75” caliber and smooth bored barrel. In Crimea it was also in use along with the model 1851 (Minié Rifle) resulting from the first experiments with rifled barrels.Rifles in .702 caliber were produced at the beginning of 1852 and the first deliveries were made after one year. The P1851 did not stand comparison with the P1853 thanks to the better metals used and the ballistic accuracy of this later gun.

The Pedersoli Pattern 1853 Enfield Rifle, modern replica of one of the most important military rifles ever

Studies made during those years proved the ballistic advantage of the reduced caliber, confirmed also from news of the performances obtained with the contemporary Swiss federal carbine Model 1851. It was then, also thanks to studies by Charles Lancaster, that the Model 1853 was born, also known as the Enfield Rifle, so named after the arsenal that introduced it.Even if the gun was considered exceptional, continuous improvements were looked  for to exploit the best research. This is the reason why four versions of the P1853 were produced, varying in profile and the type of barrel bands or the ramrod profile and tip. Davide Pedersoli chose the third version, or third model, as produced in Birmingham, the bands tighten by screw clamps with the ramrod tip acting as a jag for the cleaning patch. 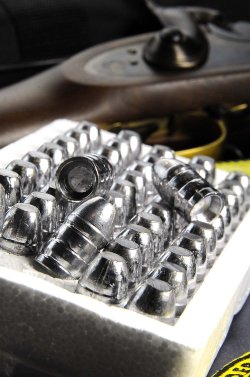 Bruno Circi
For those shooters who do not love to cast lead bullets by themselves, the ready to use cast bullets from Pedersoli are the perfect solution

Further the Birmingham version (produced in larger quantities) was considered to be the most popular among all the P1853, and between 1858 and 1863 was produced by other companies such as the Royal Small Arms Factory at Enfield or the London Armoury Company of Bermondsey. The production date period makes this model among those more extensively exported, especially overseas to equip the combatants of both fronts in the American Civil War.In more recent years, in the last two or three decades there have been many muzzle loading target shooters and historical re-enactors around the world that used reproductions of the Enfield P1853 rifle available on the market. Today, however, it is finally possible to choose a reproduction rifle correct in every small detail. In fact Davide Pedersoli, following historical research in museums and with the help of collectors and famous international historians, now reproduces the Infantry Enfield P1853 rifle featuring perfect details faithful to the original.

The barrels are manufactured to the new pattern outside profile and weight, the choice of American walnut for the stock accurately profiled as on the original guns, the correct hammer shape and dimensions and of the lock screw washers, rounded ears, are some of the details to produce a gun immediately embraced by enthusiasts and collectors.Pedersoliʼs Enfield P1853 features a barrel in .577 calibre, 39” long, with three groove rifling with a 78” twist (1:981 mm). The sighting is with a fixed front sight and the rear sight was the British Long Range ladder type, with sidewall graduations numbered 1, 2, 3, 4. The overall length of the rifle is 55” or 1397 mm. 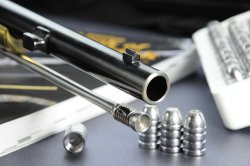 Bruno Circi
The Pedersoli Pattern 1853 Enfield Rifle is a muzzleloader, and the muzzle shows up the big hole of its big caliber: a full .58, intended to shoot heavy Minié bullets

Other details contributing to the perfect appearance of this reproduction, the lock is marked TOWER,  1861 year referred to the production date, the royal crown, omitting the royal lettering to indicate a commercial product for export and not one for regular ordnance issue.On the barrel the marks of Birmingham Proof House, as seen on one original model: the letters DP (instead of BP) under a crown (signifying the provisional proof test) the number 25 (referencing 25 bore or 0.577” caliber), two crossed scepters with the crown and the letters BPC (final proof test). On the right side of the stock there is a cartouche referring to BSAT (Birmingham Small Arms Trade).

Most enthusiasts of the Pedersoli Enfield reproduction are American re-enactors who now have the choice of a correct reproduction, an aspect which assumes importance in the re-enactment events of the American Civil War. Without forgetting the Commonwealth countries (former British Colonies) where re-enactors groups will be glad to have our new reproductions.This rifle, as the other models produced by Davide Pedersoli of the same historical period, has been approved by the N-SSA (North South Skirmish Association).N-SSA is an association promoting competitive shooting and historical re-enactment events with all the guns in use during the American Civil War; the guns in use must be original or approved reproductions inspected by the N-SSA Board Committee. A request for approval must be submitted to the Committee.Finally of interest to target shooters, the guarantee of ballistic accuracy is ensured by Pedersoli PMG barrels production range.