The Brazilian lever-action rifle with North American roots is no stranger to the Western scene. Now importer Ferkinghoff presents a reworked version of the Rossi Puma M92 Blued Brass.

Toupee on the striking head, shaped by countless glasses of “Wild Turkey” bourbon. Over the fat paunch a washed-out red cowboy shirt and a vest that looks like leatherette. The usually beige chino pants at half-mast, the revolver belt still one level lower – sure, that’s him: John Wayne. However, the image of America’s still greatest silver screen hero would not be complete without his Model 1892 lever-action repeater equipped with an oversized “large loop” lever.

John Wayne’s rifle was one of a series of repeaters produced by the US company Winchester until 1941. Together with the Colt Single Action Army Revolver M 1873, this is considered as the classic armament of most celluloid Western heroes. Now, however, the by now well about 100,000 cowboy action and Western shooters draw their inspiration not only from historical photos, paintings and artefacts exhibited in museums, but also, of course, from movies and TV series. Therefore, the industry has long been working on copies of this Winchester model.

These include the products marketed under the names of Winchester and BROWNING and built in Japan by Miroku, as well as those developed in Italy by companies like Armi San Marco and Chiappa Armi and, in Brazil, by Amadeo Rossi. This article is about such a Rossi, as well as about how Ferkinghoff as importer has reworked it – but one thing at a time, nice and orderly.

The Boys from Brazil

Although Winchester produced the M 1892 and its derivatives M 53 and M 65 by the millions, there never seem to have been enough of them. For there is no other explanation as to why the Spanish company GarateY Anitua started work on a version for police officers, foresters, prison guards and hunters, later known as “El Tigre”, as early as 1915 – in numbers easily comparable to those of Winchester . And when in the following decades the North Americans still continued to ignore the global demand for new 1892s, the company Amadeo Rossi, founded in 1889 in São Leopoldo in the Brazilian federal state of Rio Grande do Sul, occupied this niche: As early as 1976, thus ten years earlier than assumed for a long time, they launched their 1892 copy (i.e., depending on the sources, two years before or after the company presented the Overland side-by-side coach gun legendary among Western shooters).

This offshoot of the M 1892 has since branched out into a variegated range with designations such as M 65, M 67 or M 77. However, among CAS shooters these are mostly referred to under the umbrella term of Puma. This is because Rossi initially used to brand its copies of the Winchester M 1892 on the left side of the receiver with a coin-like badge representing a cougar head.

Since 1997, ROSSI has belonged to the likewise Brazilian Group Forjas Taurus SA, headquartered in Porto Alegre, but it has never given up production of its Pumas. On the contrary, nowadays Taurus/Rossi is unquestionably the world’s largest manufacturer of this type of repeaters. And anyway – the term copy is not quite appropriate. For the rifles from the home country of Gisele Bündchen and Adriana Lima have for a long time been a family with its own distinguishing features. This is supported by the range comprising calibres the likes of which the Winchester M 1892 has never had: The originals came in .25-20, .32-20, .38-40 and .44-40 Winchester and .218 Bee.

Rossi's products, by contrast, range from .38 Special and .357 Magnum through .44-40 Winchester and .44 Magnum to .45 Colt, .454 Casull and .480 Ruger. And while Winchester’s products were mostly restricted to blued designs, the Rossi range additionally includes varieties in more practical stainless steel finish as well as such with flashing golden brass receivers. Precisely the latter was the type of Rossi Puma M 92 that Ferkinghoff sent to Visier– not a silver but a golden lion.

Michael Schippers
Three mesquiteers: The Ferkinghoff Rossi Puma M 92 Blued Brass on top of a Winchester M 1892 and a PUMA in stainless steel design. The Rossi's as rifles with 24” octagonal barrels, the Winchester as carbine with 20” round barrel and subsequently installed large loop lever 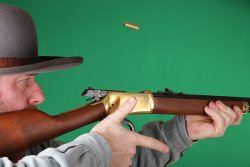 Michael Schippers
Get rid of that: the test weapon pleased by its well-reworked bolt action and judder-free repeating. With a cartridge of suitable length there were neither feed nor ejection problems; in the test there occurred no ignition difficulties at all 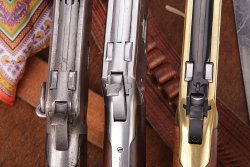 Michael Schippers
Always put on: the comparison shows that the Winchester and Stainless Rossi (centre) came without the firing pin safety found on top of the Puma M 92 Blued Brass in front of the hammer

The sobriquet “Blued Brass” alludes to the metal of the gun. There was brass at the front of the forearm and the back of the butt plate as well. Lever, trigger, hammer, sights, 24” octagonal barrel and tube magazine came blued – all in all not an authentic ensemble, yet with plenty of prairie flair. In between, there was pickled and oiled Brazilian wood. Its texture was very much reminiscent of European beech and can be expected to gain somewhat from treatment with some elbow grease, fine sandpaper and linseed oil.

Ferkinghoff supplied a specimen in .38 Special/.357 Magnum; buyers can purchase the rifle also in .44-40 Winchester and .45 Colt. In terms of basic function, the Puma M 92 fully conformed to the design that U.S. engineering genius John Moses Browning had developed in his days for Winchester: a repeating rifle with tubular magazine for twelve cartridges, with horizontally running lock and two bolt blocks vertically sliding in the sides of the receiver.

As a technical bonus, Rossi has mounted a miniature rotatory safety catch acting on the firing pin on the back of the lock. Security fetishists may love it; for Western sportspeople it is superfluous since they load their weapons only immediately before each round of the competition – and that always under the hawk-eyes of a specially delegated “Range Officer”.

The finish of the Ferkinghoff Rossi Puma M 92

Here the John Wayne apostle shrugs respectfully. For Rossi's have a reputation of not being processed with ultimate care in details and in the final polishing. Sometimes, some meticulous European shooters may feel all the bad stereotypes regarding Latin American nonchalance confirmed. This rifle also came with details to complain about.

By contrast, the testers found nothing to cavil about the sight picture of the weapon – the 1.29-mm-wide U section of the target-friendly target rear sight blade harmonized well with the 2.05-mm beam sight: expedient for the Western shooter who emphasizes rapid aiming and firing as well as for someone who wants to go ring hunting over long distances of 50 metres. The finish of the metal itself likewise offered no great cause for criticism; that was neat. In addition, we liked the operation of the mechanic parts very much – precisely here the Frankish importer has invested much effort with Western shooting in mind. This is now going to be explained in more detail.

The system of the Ferkinghoff Rossi Puma M 92

Browning’s lock design offers some pitfalls that will result in rough bolt action and maltreated hands if not manufactured with proper care.

Firstly, there is the polishing of the two control curves on the left and right of the locking blocks. If this is notchy, you will feel that when lowering the lever with the weapon uncocked until the lock strikes the hammer after a few millimetres of travel. Here this was completely in order.

All other imperfections in the repeating behaviour can be imputed to the parts of hammer and lock rubbing against each other. This holds true on the one hand for the corrugated hammer guide, found on the rear third of the lock underside – and the other for the top of the hammer head. Here the Ferkinghoff team had both rounded the hammer head cleanly and eliminated all edges on the underside of the lock sliding over it – flawless.

Here is a Rossi presenting “out of the box” with a repeating behaviour that is more than just serviceable even for Western shooters. It also offers a trigger free of grating, breaking softly at about 1,350 grams of trigger weight – everything just as it ought to be.

Anyone who wants it even smoother will have to see a tuner. What the much-shooting cowboy party certainly needs to address, however, these are the inner edges of the lever. On behalf of the fingers placed therein during repeating, either this should be somewhat chamfered and polished, or the steel oval of the lever should be provided with a skin-friendly leather lever wrap.

The Ferkinghoff Rossi Puma M 92 “on the firing line”

To get an impression of the repeating behaviour and the precision of the Ferkinghoff, for direct comparison the testers took a Rossi Puma M 92 Inox from the “pre-Taurus era”, well-zeroed after about 1500 shots but not reworked, along to the range. By the way, like the Blued Brass the current and reworked stainless version is sold by Ferkinghoff.

While the “old” Rossi swallowed all types of ammunition without difficulty, the new model demanded a slightly heavier hand when feeding the Remington 158 grs SP. A check of the overall lengths of all types of rounds tested showed that with an average overall length of 39.6 mm the Remington was shorter by two to three tenths of a millimetre than the others – perhaps that was the reason why. Otherwise, the rifle reworked by Ferkinghoff would repeat at least as smoothly as the veteran would.

In terms of precision, the blued brass version was somewhat superior to the rest, not least thanks to the improved sights – all groups did fit into the ten-point area. As for the lateral position of the hits, there was nothing to complain about.  With the heavy WM bullets, the hits were at the point of aim, and with the 158-grs projectiles consistently 10 to 15 cm too high in the breakpoint – perfectly fine not only for the shorter Western distances.

Conclusion from the test

The Rossi Puma M 92 presented outwardly rough, but fine-tuned where it really matters, namely in the interaction of the locking elements and upon triggering. The sights and the proper shooting performance (all groups under 60 mm!) offered nothing to criticize either: With this reworked version, Ferkinghoff has presented a sports-oriented workhorse, suitable even as the factory default version for all variants of lever-action shooting.

The price-performance ratio is also good: the weapon is considerably cheaper than many Italian replicas. Anybody who wants to compete only in precision shooting or only in Western shooting and come out on top will make further changes over time. But that’s the way it is in all field of sports shooting, has nothing to do with the overall quality and also represents something that requires some time of practical experience with the individual weapon. 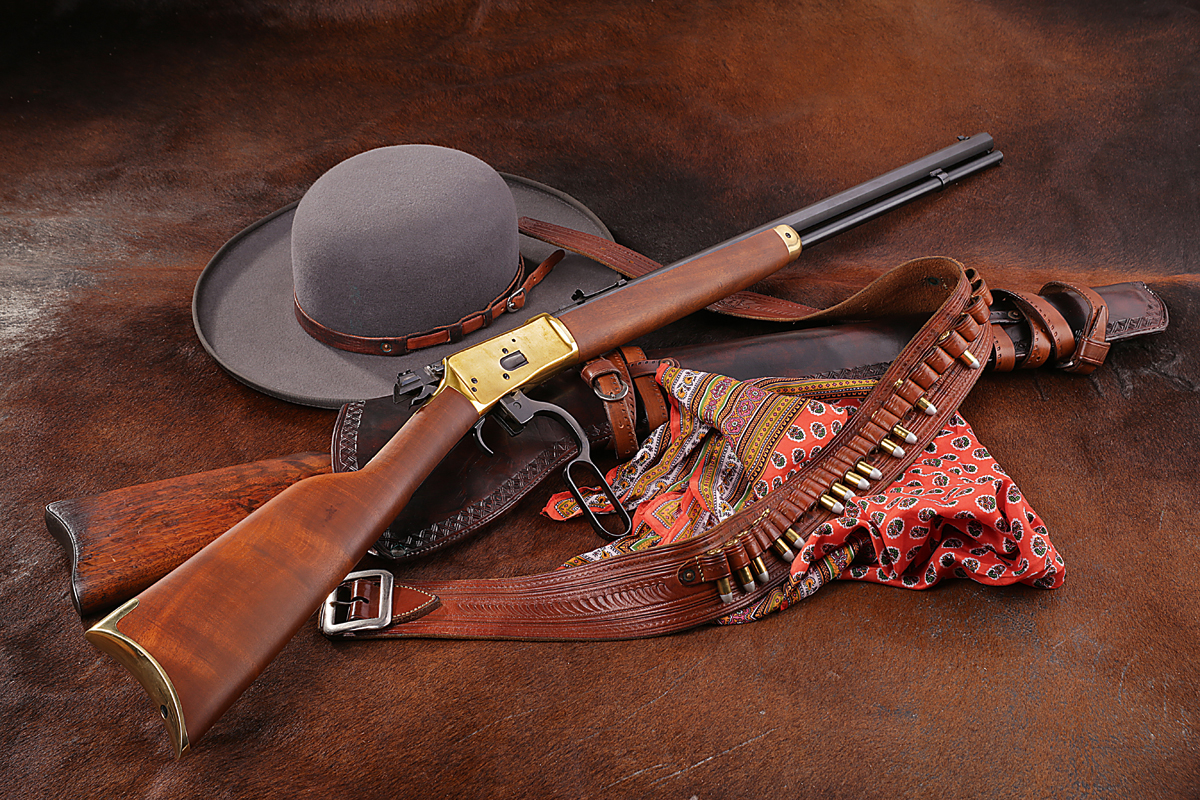 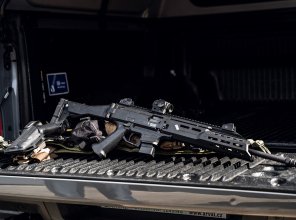 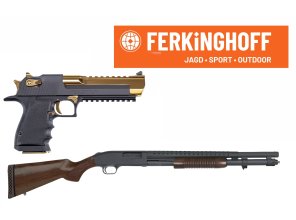 waffen-ferkinghoff03/10/2020Ferkinghoff International: new products for 2020 from Kimber, Desert Eagle, Mossberg and other US brands 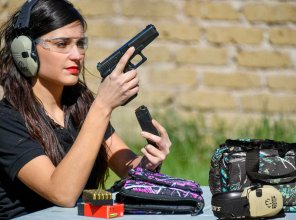 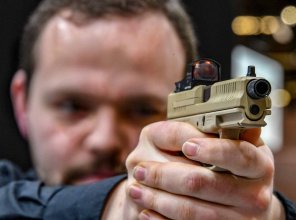 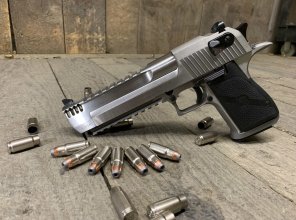 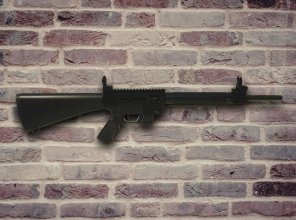 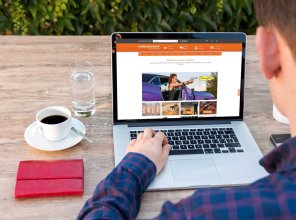