Born in Malta in a family of Italian ancestry, emigrated to work in Australia first, then in the United States, Charles St.George is the creator of some of the most original weapon systems to have seen the light in the past 40 years.

Some, like the Leader Dynamics T2-Mk5 and the Bushmaster M17S rifles, may not have experienced a huge marketing success, but what they all share is St.George's signature triangular bolt design: a system so reliable and sturdy that it was later adopted by the Barrett Firearms company for the M82-A1 rifle.

Charles St.George's latest great design was first showcased in 2011, and all4shooters.com's followers may remember that: an interesting bull-pup, semi-automatic long-range anti-matériel rifle, first known as the "Sabre Defence LSR-50 Leader", then as the MICOR MD.50 "Leader.50", but so far still awaiting a real market launch in any version.

Latest news about the "Leader.50" are that MICOR Defense, after obtaining intellectual property, terminated St.George's services (leaving him high and dry although he had a 12-months non compete clause!) only to sell the manufacturing and marketing rights to Pallas Arms LLC., a company headquartered in Decatur (Alabama). Despite announcements that the rifle − now renamed the "Gatekeeper.50" − would be launched "by late Summer 2014", all preorders placed with MICOR in the past two years were canceled and refunded by the company, and so far Pallas Arms failed to produce any prototype or to even test the final design.

Now operating his own firm − St.George Arms, LLC., headquartered in Murfreesboro (Tennessee) − Charles St.George thus teamed up with K&M Arms out of Chandler (Arizona) to take the fate of his latest brainchild into his own hands, and a few days ago, he announced an improved version of the design, dubbed the Leader 50 A1.

Charles St.George's work wasn't limited to a departure from the features of the old, patent-pending design: the new version is meant to be a solid performer that would be more ergonomic, even more lightweight and easy to manufacture than the previous incarnations.

Manufacturing materials have indeed been touched by the redesign: the Leader 50 A1 features a large lock up area and offers a huge safety margin, meaning that the use of the expensive Maraging steel used in the MICOR MD-50 is no longer necessary. Instead, the Leader 50 A1 is built around an extruded receiver, which lowers the overall weight of the gun (empty) to 16 pounds/8,16 kilograms, making it the lightest rifle in its category.

A bull-pup design, the Leader 50 A1 rifle sports a cold-hammer forged 24-inches barrel, equipped with a proprietary muzzle brake, which makes up for the bulk of the overall lenght... that remains still extremely low at 39.5 inches (around 1 meter), roughly the same lenght as a standard AR-15 rifle with a 20-inches barrel.

The Leader 50 A1 rifle comes with Charles St.George's signature triangular-shaped bolt with a 45-degrees locking rotation; it is cocked through a wide, easy-to-use handle located on the left side of the rifle, much forward on the receiver. Semi-automatic operation is achieved through a non-adjustable short-stroke gas-operated piston; in conjunction with the natural gas dissipation achieved by the short-stroke piston and with the extremely effective muzzle brake, a good balance between fixed masses and moving masses during the firing cycle ensures mild recoil.

The Leader 50 A1 rifle comes drilled and tapped to accept several MIL-STD-1913 "Picatinny" rails all throughout its receiver, which will allow the use of any kind of commercial or military optical systems, sighting devices, bipods, monopods, or tactical accessories.

Unlike the previous design, the breechbolt of the Leader 50 A1 rifle features no hole in the body for a conventional-style cam pin − and the cam pin itself has no firing pin hole; these changes make the Leader 50 A1 extremely sturdy and less subject to fatigue cracks.

The previous linear hammer system was also replaced with a novel retractable hammer, incorporated and mounted in the rear of the weapon. The original extractor was ditched in favor of an entirely new design that is not avversely affected by rotational forces. The Leader 50 A1 is thus not only much more solid, but also of easier assembly than its predecessors, and can be easily stripped on the field with no special tool required.

In addition to the standard manual safety, a grip safety automatically engages and locks the trigger bar once the hand is removed from the grip.
The Leader 50 A1 rifle is chambered for the 12,7x99mm/.50-BMG caliber, and feeds through the same detachable 10-rounds magazines used by the Barrett M82-A1 and Serbu BFG-50 rifles; however, the extruded receiver is dimensioned to accept other calibers as well, and Charles St.George plans to make the Leader 50 A1 design compatible with, or convertible to, popular alternative chamberings such as .416 Barrett, .338 Lapua Magnum and 7,62x51mm/.308 Winchester. Conversion systems should retain a vast parts commonality.

Competitively offered at a manufacturer's suggested retail price of 6.900,00US$ in the United States (that's about 5200€), the Leader 50 A1 semi-automatic rifle could represent a great alternative, and possibly a future standard, for military units, Police operators, and civilian shooters in long-range competitions alike.

As a matter of fact, military representatives from several Countries already shown interest in the rifle multiple times, in those occasions when its previous incarnations were publicly showcased.

Charles St.George honored all4shooters.com by choosing us as the first internationally-based media platform to announce the imminent launch of the new Leader 50 A1, but there is no clear word yet concerning a slated release date; what we know is that K&M Arms will provide manufacturing and shipment, while St.George Arms will manage distribution.

However, unlike the companies that handled the previous incarnations of the design, Charles St.George doesn't seem willing to waste any more time; we may thus hope to see the Leader 50 A1 in stores as soon as possible. 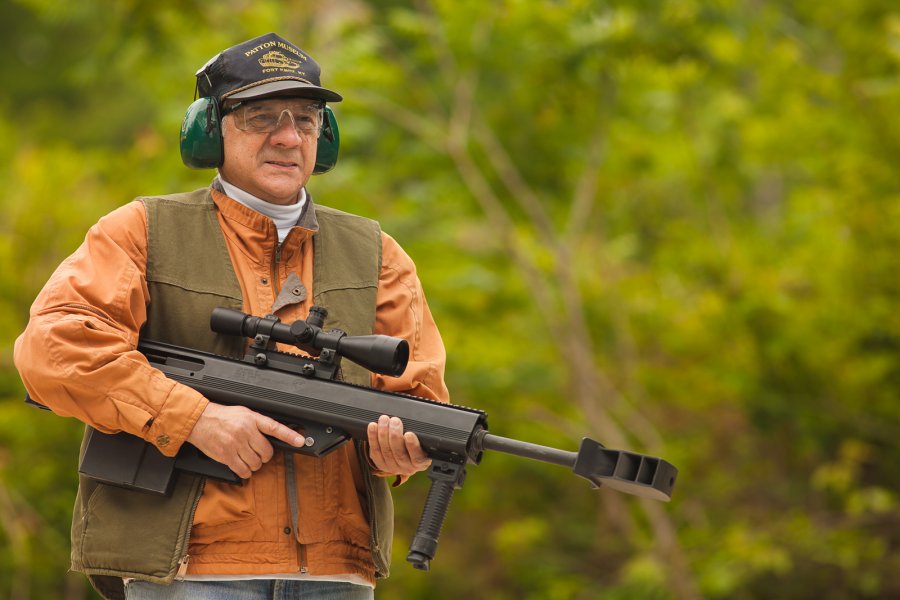 Oleg Volk
We wish Charles St.George the best luck in his new adventure, and we look forward to see the Leader 50 A1 in stores soon!
Subscribe to the Newsletter
Click here for more information on the topics:
Pro-zone
That might interest you too: