Oleg Volk
Charles St.George, the inventor of the LEADER.50 among others, poses here with his latest brainchild

Born in Malta, grown up both personally and professionally in Australia, Charles St.George sure is one of the most respected names in modern firearms engineering. Gun enthusiasts and firearms historians will remember him for his 1980s-vintage T2 Mk.5 semi-automatic rifle of Australian manufacture, and for his work on a prototype bull-pup assault rifle design for the Australian military which would have later been produced in the U.S. as the Bushmaster M17-S .223 semi-automatic rifle. He is however mostly known for his most important invention, the triangular breech bolt design, which would have later been adopted in a number of widely popular civilian and professional firearms designs, including the well-known Barrett M82-A1 (a.k.a. M-107) selfloading anti-matériel rifle.

MICOR Industries, Inc.
The production version of the LEADER.50 sports several differences from the original prototypes, including a redesigned muzzle brake and a top carrying handle dubbing as a scope mount

St.Georgeʼs latest brainchild made sensation at the 2011 SHOT Show, where it appeared as the “LSR-50 Leader sniper rifle” at the stand of the now-defunct SABRE Defence. Despite the demise of the company, which came under the now well-known circumstances shortly after the 2011 Show itself without any involvement for St.George, the design was relieved by MICOR Defense Industries Inc. of Decatur, Alabama − and it definitely deserves it. A self-loading, piston-driven, gas-operated, self-cleaning long-range rifle in the .50-BMG (12,7x99mm) caliber with a triangular breechbolt and high-grade aluminium and “Maraging” steel construction, St.Georgeʼs bull-pup, magazine-fed half-inch wonder is lighter and more compact than most, if not all, of its most direct competitors on the market, and its low recoil makes it utterly controllable even when firing from the standing or kneeling positions, making it ideal for special applications and non-conventional operations, all while retaining the standard .50-caliber punch and the accuracy of a 22-inch barrel fitted with an excellent proprietary muzzle brake with a triple expansion chamber. A top Picatinny rail is provided for optics, while another, shorter one is located under the handguard for bipods and other attachments. 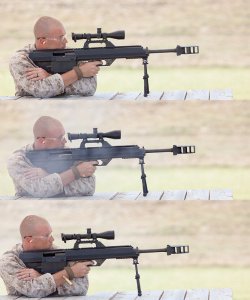 Oleg Volk
A firing sequence of the LEADER.50 rifle is enough to show how light is the recoil on this revolutionary long-range rifle

Even with so much going for it, the LEADER.50, as it has now been called, had to wait almost two more years before entering production... but the wait appears to be finally over. MICOR Industries in fact just announced that the production of the final design LEADER.50 has started, with minor modifications to the previous design, such as a raised scope mount − and some further negligible tinkering possible in the near future. The first production run is expected to be delivered in the first quarter of 2013, and in the meanwhile MICOR will be accepting pre-orders from both private purchasers and distributors. Interested parties may thus place a reservation order on the company website and pay a non-refundable deposit of 1,999.99US$ in advance. A final payment of 7,996US$ due before gun ships will cover the final cost of 9,995US& − the cost does not include applicable shipping charges and tax. All laws and regulations apply, and private buyers should be aware of Local, State and Federal laws before ordering. No orders from outside of the United States of America are taken via Internet; foreign distributors wishing to acquire the LEADER.50 and military, law enforcement or governmental entities should address directly to MICOR for inquiries.

All laws and regulations apply, and private buyers should be available of Local, State and Federal laws before ordering. No orders from outside of the United States of America are taken via Internet; foreign distributors wishing to acquire the LEADER.50 and military, law enforcement or governmental entities should address directly to MICOR for inquiries. Orders from within the U.S. require a valid FFL (Federal Firearms License).