Following its visit to the DSEI trade fair in London, Heckler & Koch – a German government supplier – gets back with a lucrative major order from the UK Ministry of Defence: £15 million and a contract option for another £50 million. Learn more here on all4shooters. 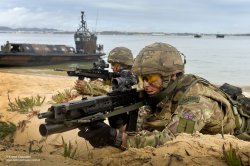 Shield Sights
The SA80 was hardly used in the 2nd Gulf War due to considerable malfunctions.

The "Brexit" madness in the news around the clock is simply annoying, yet economic cooperation beyond the borders of the United Kingdom also seems to continue to work in the field of armaments and national defense. Through its UK subsidiary NSAF Limited, Heckler & Koch has entered a contractual arrangement with the British Ministry of Defence and will carry out the 3rd upgrade of the British SA80 standard assault rifle . As part of the British Army's "Equip to Fight" programme, the weapon system will be upgraded to the SA80A3 variant.


Enhancements incorporated in the  SA80 upgrade

Shield Sights
At the turn of the millennium, the German manufacturer Heckler & Koch was already involved in the modernization of the British Bullpup assault rifle.

The upgrade includes a new foregrip, an improved upper receiver, additional safety features and enhancements to reduce the weight of the assault rifle. Heckler & Koch will carry out the modifications at its plant in Oberndorf am Neckar, Germany , while the system will be assembled in Great Britain. The foundation stone for this is laid by the now concluded 3-year contract with a total volume of over £15 million. The contract also includes the option for upgrading additional SA80 assault rifles and a 2-year contract extension at a cost of approximately £50 million. As expressed in Heckler & Koch's press release, “ the commitment between the Ministry of Defence and Heckler and Koch in entering the SA80 Upgrade programme embraces the confidence both parties have in the weapon, and each other .”

Shield Sights
The latest A3 upgrade includes a new foregrip, an improved upper receiver, additional safety features and enhancements to reduce the weight of the assault rifle.


Subscribe to the Newsletter
This article is also available in this language:
DE
Click here for more information on the topics:
Pro-zoneAssault riflesRifles5,56 mm NATO
That might interest you too: