The trend towards striker-fired carry pistol continues: SCCY Industries DVG-1, the affordable "made in USA" alternative

A contribution from Giorgio Brancaglion09/06/2021 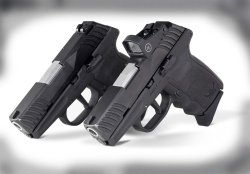 In 2020 in the USA there were about 19.5 million concealed carry weapon permits, a number that grows every year by about 15% and that sees women as the main applicants. It should come as no surprise then that the market for concealed carry handguns is so attractive that it has effectively monopolized the projects of the major handgun manufacturers.

Those of you who follow all4shooters.com regularly will have noticed a certain monotony in the offerings from large US and international companies: today's new products mainly consist in 9mm striker-fired pistols with polymer frame, high capacity magazine and a provision for a red dot sight – included in this category are the Kimber M-7 Mako, the Springfield XD-M Elite 3.8, the Smith & Wesson M&P Shield Plus, the SIG Sauer P365X RomeoZero, plus others that we won't mention here in order not to bore you.

In addition to these large international manufacturers, in the US a small army of local companies is active, who often give birth to interesting projects despite being outsiders. This is the case of SCCY Industries of Daytona Beach, Florida, which has had in its catalog for a few years now the CPX carry pistol in .380 ACP and 9 Luger, with DA/SA trigger and external hammer, made in different finishings and recently offered in an optics-ready version. 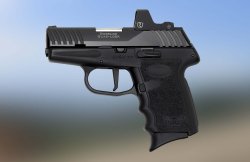 At present there is no red dot-ready version other than with the factory-fitted Riton MPRD 2 reflex sight.

With the new DVG-1 model, SCCY Industries launches into the crowded group of striker-fired guns, keeping the CPX barrel and making several modifications to the slide.  But let's start at the beginning: the DVG-1 is a 9mm semi-automatic pistol with a polymer frame. The single-stack magazine has a capacity of 10+1 rounds. The pistol has no manual safety and the controls we find on the left side are the takedown lever and the magazine release button. The panels of the grips are non-slip textured and on the dust cover sides there are rest grooves that facilitate the positioning of the index finger when it is not on the trigger. The steel slide has a black nitride coating and features front serrations as well. On their website SCCY Industriess point out with a touch of pride that aside from the springs every component of their guns is manufactured in-house. This also applies to sights consisting of a Novak-type adjustable U-notch rear sight and a fixed front sight. The sights are compatible with aftermarket sights for the Glock 43, so there are endless possibilities for customization. Alternatively, the DVG-1 is available factory-fitted with a co-witnessing Riton MPRD 2 micro-reflex sight with 3 MOA red dot.

A great deal of design work has been done at SCCY Industries on the trigger assembly, which is controlled by a straight trigger. Pull weight is only 2.5 kilograms.

The DVG-1's barrel measures 3.1”/78 mm and has a right-hand rifling with 1:16 twist. The gun is a locked breech design, with a system developed by Joe Roebuck – the company's founder – called "Quad Lock". It provides as many as four locking points between the barrel and frame, ensuring superior accuracy.

We have now seen the technical features of this sub-compact pistol, which are certainly interesting but not enough to make it stand out among the fierce competition. Where is this gun's real strength? The answer is: in the price. In the US, the iron sights version of the DVG-1 costs only 299.99 dollars, or about 250 euros, while the version with Riton MPRD 2 red dot costs 399.99 dollars, or 340 euros. If we think that a competitor like the Kimber M-7 Mako or like the Springfield Armory XD-M Elite 3.8″ costs exactly twice as much, here is revealed the strength of this independent manufacturer that challenges the big majors of the gun world on their ground. Let's hope that this gun can arouse the interest of some European importer, even if the tendency to disarm private citizens that characterizes the EU countries does not leave much room on the market for guns like this. At least for now.

Subscribe to the Newsletter
This article is also available in this language:
IT
Click here for more information on the topics:
PistolsGECO9 mm9x19 mm (9 Luger)
That might interest you too: 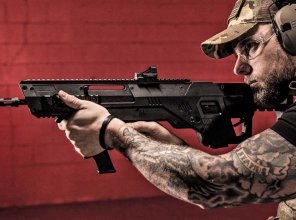