Pistol caliber carbines like from another star? KRISS Vector G2 CRB and G22 CRB in three calibers under test

The KRISS Vector pistol caliber carbines introduced here differ at first glance from all other PCCs makes that are so familiar due to their striking appearance. We had the rare opportunity to test fire the technically unusual KRISS Vector models in three calibers extensively. 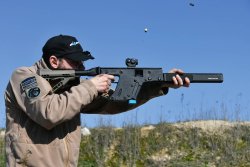 Franco Palamaro
You first have to get used to the appearance of the KRISS Vector carbine. Their shooting behavior likewise provides a whole new feel. 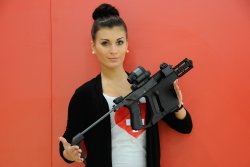 Franco Palamaro
The only constant is change: this is what one of the early prototypes of the KRISS Vector submachine gun in .45 Auto looked like in
2007.

The development history the semi-automatic KRISS Vector firearms with the special "Super V" delayed blowback system goes back some years. To be precise, it goes back to 2005, when functional models of the KRISS Vector submachine gun in .45 Auto, manufactured by TDI in cooperation with Remington, appeared in the USA – but visually they had almost nothing in common with a gun.

In 2008, following the sampling of previously shown, further developed prototypes, we were able for the first time to see the production-ready "KRISS Super V XSMG"  submachine gun and the civilian "KRISS Vector CRB/SO" semi-automatic carbine in .45 Auto from the US company Transformational Defense Industries, Inc. (TDI) at the 30th SHOT Show anniversary event in Las Vegas, Nevada. Since then, we have had the opportunity to test fire the futuristic-looking submachine gun in Germany, Switzerland or on the other side of the pond. In 2015, the second-generation models, improved in detail, were introduced. 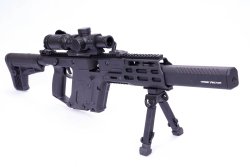 Michael Fischer
For accuracy testing, we fitted the KRISS Vector carbines with a Falke 1-8x26 scope.

However, the original manufacturer in the form of KRISS Arms Group from Switzerland, which also offered the Sphinx pistols and Defiance suppressors, went bankrupt just a year later due to financial difficulties, leaving the TDI successor and one-time North American partner KRISS USA from Chesapeake, Virginia, as the sole manufacturer today. The company's current product line includes the Vector G2 submachine gun in 9x19 and .45 ACP (also available in blue FX and red training versions) for law enforcement and the military, and the Vector G2 semi-automatic carbine in five different build/barrel lengths in 9x19, 9x21, .40 S&W, 10mm Auto and .45 ACP calibers. 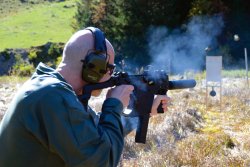 The CRB (CarBine Barrel) version we are talking about here features an M4 stock and 16"/406 mm barrel. A GLOCK magazine extension called the "MagEx2 Kit" is also offered, which replaces the original magazine base plate extending the magazine overall capacity to 40 rounds of 9mm, 33 rounds of 10mm, and 30 rounds of .45ACP.

Dieter Licht
The KRISS Vector G22 CRB models for the .22 Long Rifle rimfire cartridge are an ideal training supplement to the centerfire caliber versions. Technically different on the inside, controls and handling are identical. 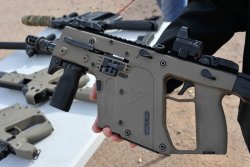 Franco Palamaro
Of course, you won't find the fire selection lever with two-shot burst and full-auto options of the SMG on the semi-automatic civilian versions of the KRISS Vector G22 CRB.

The patented design of this unusual weapon system came from a Frenchman named Renaud Kerbrat, who came from Brittany and lived in Switzerland, and who broke completely new ground. After all, the fundamental concept of a shoulder weapon had not changed much since the bolt-action rifle of the 19th century, even in the case of semiautomatic and fully automatic self-loaders. 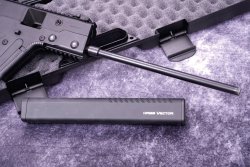 Michael Fischer
What looks like a silencer or mock-up is merely the barrel shroud that encases the low-axis, thin 16" barrel.

The bolt and barrel are positioned one behind the other in linear alignment with the barrel bore axis. The bolt, driven by recoil or gas pressure, moves linearly rearward against the recoil spring until the spent cartridge case is extracted from the chamber and the next cartridge is fed from the magazine. This linear design results in recoil running straight into the shoulder and muzzle flip. This physical phenomenon can be countered technically by positioning the bolt mass further forward around the barrel, as in the UZI-MP, making the shoulder stock emphatically straight, as in Stoner's M16/AR-15, and installing compensators at the muzzle. 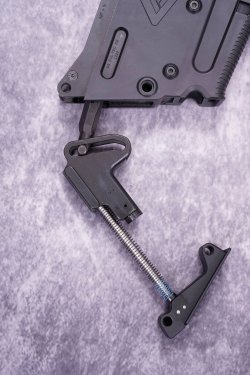 Michael Fischer
The bolt/block assembly, which moves vertically downwards after a very short, linear path, from the imposing middle section of the KRISS Vector carbine. 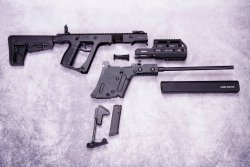 Michael Fischer
The KRISS Vector carbine disassembled into its main components in 9mm Luger. In addition to the "Super V" delayed-blowback system, technical features also include an overhead trigger-hammer linkage and
the low-bore axis.

But Renaud Kerbrat courageously left well-trodden paths by putting the linear principle to rest. After an extremely short, straight recoil, his delayed-blowback bolt does not simply continue to the rear in the conventional manner, but instead starts a downward travel. For this the gun features a center section into which the bolt dives. Especially with the SMG in .45 ACP, this makes for a completely unusual shooting sensation, even in full-auto fire, which reminds one of a .22 Long Rifle. 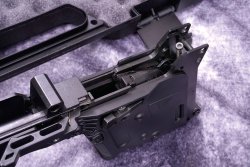 The bolt used in the KRISS Vector in its downward movement.

The bolt is connected at its rear end into a cam, which in turn connects it to a block with a  V-shaped notch in it. At the moment of recoil, the bolt briefly moves backward and then forces the "Super V" bolt block downward against the recoil spring. This downward movement swallows much of the energy that would otherwise act in a straight line back into the shooter's shoulder. Because of the two angles in the cam, the bolt/block moves downward more slowly for the first few millimeters and then more rapidly at an acute angle, making it strictly speaking a delayed blowback system.

The block is fitted with a polymer buffer that dampens the impact of the block in the housing. In terms of timing, the system is designed so that exactly at the upstroke phase of recoiling, the block weight counteracts and pushes the gun down. This is the secret of the incredibly smooth shooting feel. With the semi-automatic carbine, you don't quite get the full enjoyment, yet you certainly feel a shorter-traveling impulse with reduced muzzle flip. 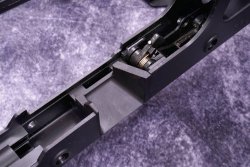 Michael Fischer
Here you can see the top hammer of the KRISS Vector carbine.

Michael Fischer
The bolt of the 9mm KRISS carbine in detail.

The main assemblies of the pistol caliber carbine are made of light alloy and are connected to each other with four HK G3-style push pins. The low-axis 16"/406mm barrel with 1-10" twist in 9x19 and 1-16" in .45 ACP is encased by a bolted-on aluminum shroud. The guns can be disassembled without tools so that the bolt assembly can be easily slid out of the center section from the bottom. Reassembly is also very simple and the assemblies are designed in such a way that you can't really make any user errors. 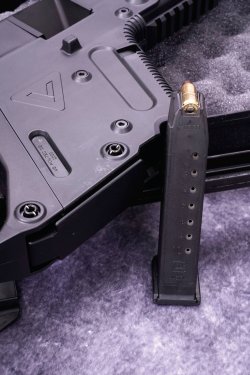 Michael Fischer
The KRISS Vector G2 carbines in 9x19 and .45 Auto are fed with 10-round single-stack GLOCK magazines.

Our 9x19 version was fitted with an additional handguard attachment that proved helpful in practice because it both extends the sight radius when using iron sights and allows you to attach a bipod farther forward toward the muzzle, providing a more stable aiming. The light alloy "MK1 Vector Modular Rail" (VMR) handguard extension is attached to the receiver with four screws. Folding emergency sights ("Back Up Iron Sights", BUIS) are included. The magazine well is located in front in the center section and is fed with single-stack GLOCK magazines with a capacity of ten rounds. The M4 stock is the usual six-position style. 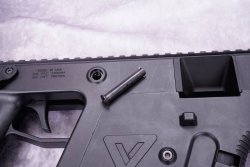 Michael Fischer
The assemblies of the KRISS Vector G2 carbines are connected to each other with push pins.

The single stage trigger with the technical feature of the overhead trigger-hammer linkage revealed quite usable characteristics with trigger weights in the 2700 g range on all four test guns, despite the large distance between the two components. This is a trigger pull weight that is also often found on typical factory AR rifles. In addition, the trigger weights of the quartet were all in almost the same range, so that the maximum difference in the average values of the trigger pull weights was a maximum of 240 grams. This testifies to the quality level of the manufacturer. The trigger on the KRISS Vector carbines is combined with a conveniently operable safety on both sides above the grip. The KRISS Vector G2 CRB models cost 2166 euros in .45 ACP caliber and 2138 euros in 9mm Luger caliber. Depending on the finish and any extra equipment – and the country you live in – prices may be different of course. 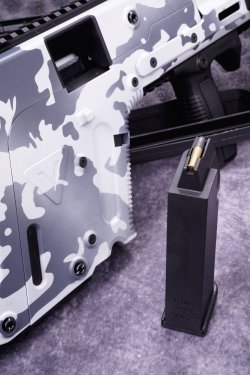 Michael Fischer
The KRISS Vector G22 in .22 Long Rifle  is fed by a special KRISS magazine with a capacity of ten cartridges.

The rimfire versions are fitted with a conventional blowback bolt assembly inside, but with an identical outer design. Due to the shorter recoil travel and the hardly existing recoil impulse of the .22 Long Rifle, the complex "Super V" system would definitely have been superfluous here. In addition, the .22s do not have the barrel shrouds of the centerfire carbines. The 16"/405mm long barrels have a 1-16" twist and feature a 1/2x28 UNEF muzzle thread. Disassembly/assembly for maintenance and cleaning also work here with the HK G3 style push pins without tools. The .22 bolt is also equipped with a plastic buffer. 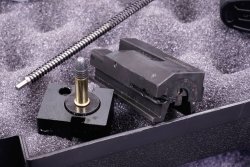 Upon meticulous inspection in the workshop, we can attest to KRISS carbines' overall high, appealing level of workmanship, both inside and out. The .22LR KRISS Vector G22 CRB  price starts at 915 euro for a plain black finish.

The KRISS Vector pistol caliber carbines on the shooting range 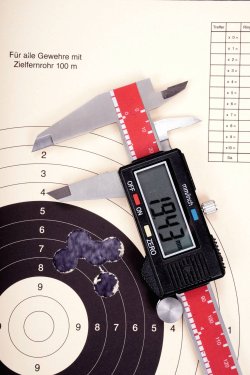 It certainly took a lot of time, energy and money to adjust the timing of the special delayed-blowback action of the SMG and carbines in the centerfire calibers so that this incomparable shooting sensation could be achieved. But in the end, the effort was worth it, because the KRISS Vector G2 CRB models in .45 ACP and 9 mm Luger worked absolutely perfectly. The KRISS Vector G22 CRB model in .22LR with its simple blowback action was in no way inferior. Since our two rimfire versions differed only in finish, we test fired just one model. 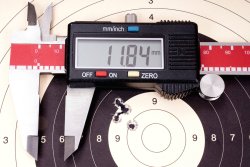 For accuracy testing at 50 meters, we equipped the KRISS Vector carbine with a Falke 1-8x26 scope and an UTG bipod. Pre-adjustment of the optics by classic barrel alignment is not possible with the KRISS semi-autos due to their design. Therefore, it is recommended that the rifles first be fired at a shorter distance or that an adjustment laser be used, as we did. We tested the KRISS Vector G22 CRB with eight .22LR ammunition types. We tried the 9mm KRISS Vector G2 CRB carbine with ten factory ammunition loads, with bullet weights ranging from 95 to 158 grains. With the .45 model, we were able to achieve best groupings of 19 millimeters (200 grains WM Bullets SWC) when using nine factory cartridges with bullet weights ranging from 185 to 230 grains. It is not without a certain irony that we were able to achieve the best group with the futuristic .45 carbine using, of all things, the German "Cowboy Action" cartridge.

The KRISS Vector PCCs impress with their clean workmanship, function and shooting performance. Sure, they are not the first choice for purebred precision disciplines, but they can certainly be used in dynamic shooting sports disciplines.

It is guaranteed that curiosity will be aroused when a KRISS Vector carbine is freed from its carrying case and bag at a shooting range full of fellow shooters. The prices starting at 915 euros for the rimfire rifles and 2138 euros for the 9x19 rifles are perfectly acceptable, not least because of the unusual design and action system.

Further information on the futuristic KRISS Vector pistol caliber carbines can be found on the KRISS website.

Subscribe to the Newsletter
This article is also available in this language:
DE
Click here for more information on the topics:
Kriss.45 ACP9x19 mm (9 Luger)
That might interest you too: 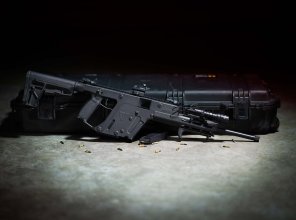 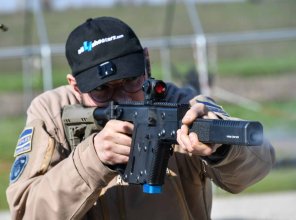 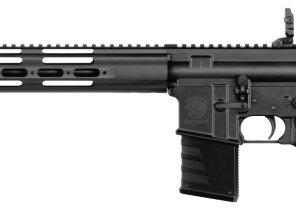 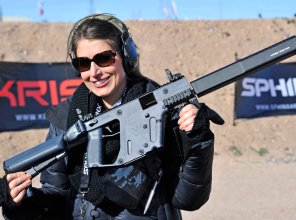