IWA 2016 / New from Heckler & Koch: the SP5K brings back the design of the MP5K sub-machinegun to the commercial markets with a semi-automatic civilian-grade version 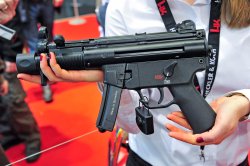 Franco Palamaro
Available either with or without a side-folding stock, the new SP5K is a reminiscence of the now defunct SP89, distributed in north America late in the 1980s

In the late 1980s, Heckler & Koch debuted the SP89 large-size semi-automatic pistol on the U.S. civilian market. A commercial version of the MP5K sub-machine gun, the SP89 featured a tubular forend in lieu of the foregrip, and came without the MP5's typical three-prong flash hider. Banned from import a few years later, the SP89 was cloned locally by some but never actually paralleled, and is today a highly coveted collector's item.

But not all is lost: at the 2016 edition of the IWA expo in Nuremberg, Heckler & Koch showcased the SP5K large-size semi-automatic pistol – basically a comeback of the SP89. A roller-locked, semi-automatic only gun, the SP5K comes once again with a tubular forend with a front hand stop in lieu of the foregrip – ribbed this time, whereas the SP89's original forend was smooth – and does without the prominent flash hider of the MP5K or the three-pronged flash hider of other full-auto MP5s.

The Heckler & Koch SP5K will be available with a rear sling loop or with an UMP-style sidefolding polymer stock; the caliber is 9x19mm only so far, and the 15-rounds or 30-rounds magazines are the same as the MP5's; just like HK's roller-locked mil-style sporting guns of the 1980s, the SP5K sports a push-button magazine release in lieu of the flat release lever that's typical of HK's full-autos.

The Heckler & Koch SP5K will be made available on the European civilian markets in the coming months – when exactly is yet to be clarified – and it already has a manufacturer's suggested price, at least for Germany, which unfortunately goes over the €2.000,00 threshold.

Subscribe to the Newsletter
This article is also available in this language:
IT
Click here for more information on the topics:
Heckler & Koch (HK)9 mmIWASemiautomatic pistols