Italian company Davide Pedersoli manufactures muzzle-loading guns for sport shooting and hunting that are used in ranges or hunting grounds every day and in every corner of the world. Some of these guns, such as the French pistol we introduce here, are also made in Deluxe versions to satisfy the most demanding palates. The technical level is always the same – that is very high.

A contribution from Giorgio Brancaglion08/04/2022

During the second half of the 19th century, the pistols, muskets, and swords signed by Parisian armorer Nicolas-Noël Boutet (1761-1833) were famous throughout Europe for their technical and aesthetic perfection. 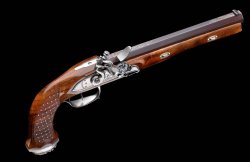 The unmistakable line of the Pedersoli Boutet 1er Empire in Deluxe version features a saw-handle grip that makes it extremely effective in aimed shooting.

Son and assistant to Noël, already an established royal armorer, Nicolas successfully continued his father's career, earning the title of court armorer from King Louis XVI and consolidating the already extraordinary reputation he enjoyed. His mechanically perfect pistols with meticulous aesthetics became status symbols like luxury cars and watches are today, and were used as diplomatic gifts between monarchs and nobles to seal pacts and alliances. The undisputed fame won by Boutet enabled him not only to overcome the Terror of the French Revolution unharmed, but also to maintain a leading position in the country's following stabilization: Napoleon appointed him director of the national arsenal at Versailles, which made around 600,000 firearms for the army during the period of his direction.

What we present is the version created by Davide Pedersoli to celebrate Nicolas-Noël Boutet's genius: it is a flintlock pistol in .45 caliber named 1er Empire Deluxe coming in an elegant case with a transparent cover. Let's make a premise right away: this is not an ornamental version, but a limited-edition, specially finished variant of a gun that can very well be used for satisfying fun on the range and in official MLAIC (Muzzle Loaders Associations International Committee) competitions.

The Deluxe Version of the Pedersoli Boutet 1er Empire 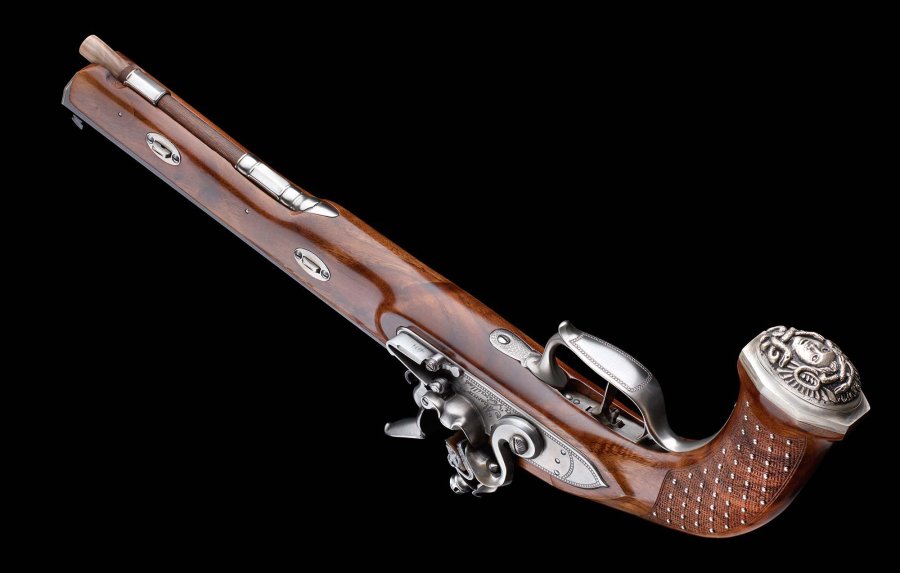 View from the underside of the Boutet 1er Empire. The butt cap with a Medusa's head reflects the taste of the time.

Pedersoli's Boutet 1er Empire is in fact particularly suitable for sport shooting thanks to the saw-handle grip perfectly aligned with the barrel, which ideally extends the line of sight. The pistol has a French-style single set trigger that is activated by pushing the trigger forward. The barrel is smooth, 255 millimeters long, for an overall gun length of 410 mm. On the lock plate it features the inscription Manuf RE/a Versaillles, on two lines.

The Deluxe version of the Pedersoli Boutet 1er Empire immediately stands out for the special quality of the select walnut wood stock that reaches all the way to the muzzle, with fine checkering and silver nails that not only facilitate purchase but also give an extra touch of elegance. At the base of the grip we find the butt plate with a Medusa-head, an element strongly reminiscent of the Boutet style. On the barrel, near the breech and muzzle we find fine inlays with stylized floral motifs. 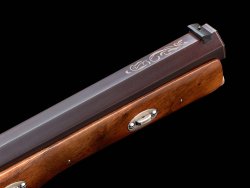 A detail on the muzzle, embellished with gold inlays. The elaborate sight is dovetail-mounted and drift-adjustable.

The ramrod is made of wood with a horn tip. The front sight is a small masterpiece, consisting of a bead set into an undercut ramp and black-blued to eliminate glares, dovetail-inserted near the muzzle allowing for side adjustment. The rear sight, also black blued, is instead screwed onto the breech tang. Aesthetically, the black-colored sights contrast nicely with the chocolate-colored bluing of the barrel.

The case with blue velvet padding that the Deluxe version of the Pedersoli Boutet 1er Empire comes in also contains a powder flask with neoclassical style embossed decoration, which while fully functional has only a decorative purpose since at the range it is much more practical and safe to use pre-weighed powder charges stored in special plastic vials.

The price of this special version is 2,533 euros (price may be different in your country). It can be ordered through Davide Pedersoli's e-commerce site.

Subscribe to the Newsletter
This article is also available in this language:
DEIT
Click here for more information on the topics:
Pedersoli DavidePistolsGECO
That might interest you too: