Professional aiming instruments by definition, the Schmidt & Bender “Police Marksman II” series scopes are proposed as a standard reference for the entire market 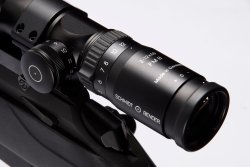 These are instruments designed for operational and professional use in harsh and difficult conditions and environments, where gear traditionally is not “handled with velvet gloves”. With, in addition, the need to deliver top mechanical and optical performance. This level of performance cannot be “cheap”: quality is always expensive in absolute terms but it can be said that the price/quality ratio offered by the PMII series of S&B is actually economical!

The PMII was the first telescope to introduce a 34 mm tube diameter, to increase the possible range in elevation and allow a significant strengthening of the frame, without having to adopt a steel tube. 338 mm long with a weight of 830 g (without the mount), the PM II/P 3-12x50 is neither light or compact, but the weight and size is insignificant given the performance provided by the optics. 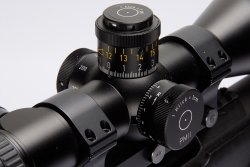 Franco Palamaro
The windage and elevation turrets. The elevaton turret is double turn 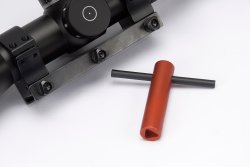 Franco Palamaro
The special tool used to mount at the right torque the S&B PM II mount. The black T handle bar, made of soft aluminum, bends once the correct foot/pounds torque is reached

Mounting the scope on the weapon is quick and easy, thanks to the special bolts with prismatic triangular bolthead that need a dedicated wrench featuring a “controlled torque” system (essentially, the replaceable grip is actually a simple rod made of soft aluminum that bends once the bolt reaches the right torque!); Moreover, the PM II is perfectly factory centered so that interventions on the turret is minimized when zeroing the scope on the weapon. The elevation turret covers the 250 adjustment clicks with two turns of the knob but, thanks to the yellow flag appearing in the control windows once the turret has been turned a full 360”, solves the problem found with many professional scopes used to engage targets at variable ranges, in which the operator (especially under stress) can lose track whether the turret is actually on the first or second turn of the knob.  The clicks are perfectly audible and above all are constant; the precision and lack of backlash are highly commendable. Each time the reticle is moved, it moves perfectly the of the number of clicks set (it may be trivial but there are not many telescopes, including top brand, that have reticles “that do not take all the clicks”, especially when going turning back in the adjustment).

The parallax adjustment and the illuminated reticle are controlled by two separate turrets, and the lighting of the reticle can be set to 11 increasing intensities, in addition to the off position. A coaxial ring on the body of the telescope controls magnification, by turning it 180 degrees it switches from 3 to 12x. 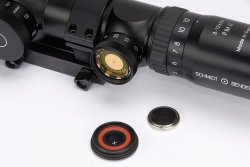 S&B mounted on the first focal plane a P3 type reticle, which essentially is the classical Mil Dot reticle with round references. So, the size of the reticle increase when the magnifications are increased, and it is possible to use the Mil Dot references to estimate the distance at any magnification. Furthermore, the reticle on the first FP lets us eliminate any problem that the reticle has when focusing the target image. Only the crosshair in the center of the reticle is illuminated. The optical performance is excellent: the PM II/P 3-12x50 is extremely bright (the manufacturer declares a minimum brightness of 90%), has excellent color fidelity and the Image observed in the scope is razor sharp. The instrument, however, combines the excellent optical performance with toughness worthy of a main battleship. 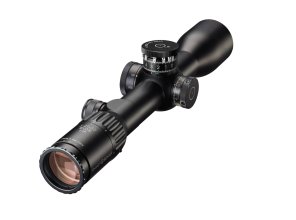 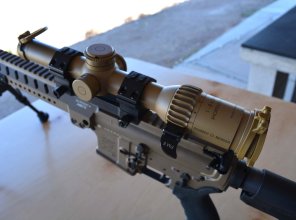 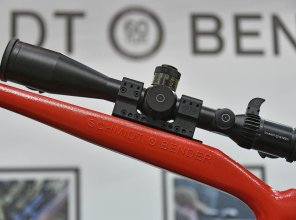 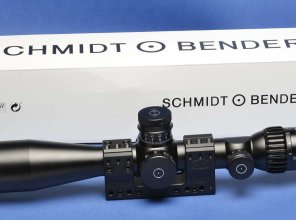 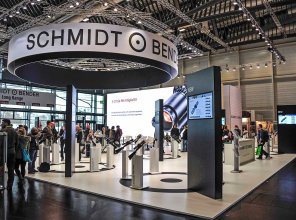 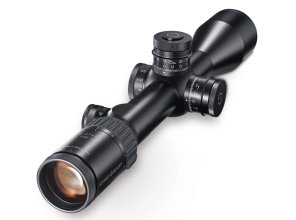