SOG Kiku - a knife with a Japanese style

SOG Kiku: a knife that blends the quality of SOG products with the Japanese style of master knifemaker Kiku Matsuda 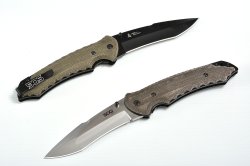 Bruno Ardovini
White or black one? Probably if you don’t predict a night time tactical use, the inox blade model definitely has more appeal

SOG Specialty Knives, is an high quality knife and tool factory. Its founder and designer, Spencer Frazer, started the company more than 25 years ago.

The production was started in the honor of the special units operating in Vietnam, by producing a commemorative version of the knife used by the members of MACV-SOG (Military Assistance Command Vietnam – Studies and Observation Group).

Since the production of their first Bowie knife, used in Vietnam, the philosophy of the founder has always been and remains that of offering the most prestigious products. 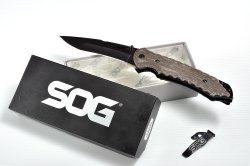 Some products in the catalogue are designed by the master Kiku Matsuda, a famous knife artisan who boasts samurai heritage.

With more than 30 years of experience in creating blades, his work has been appraised by collectors worldwide.

His knives are renowed for their sophisticated forms, meticulous and particular works of the surfaces, and for the blade steel which undergoes special treatments and obtains resistance and durability that can not be outshined.

Artisanal products of Kiku Matsuda, awarded in many international exhibitions, can cost up to a few thousands of dollars and their value increases with time. 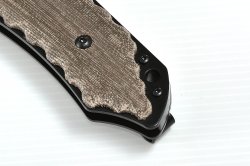 Bruno Ardovini
Micarta scales allow a very good grip of the knife. The pommel shape allows you to use the knife for glass breaking

For those who would like to buy a product of this Japanese master without breaking the bank, SOG knife-making company, in cooperation with Matsuda, offers a folder knife of great quality and original design. This is why this item is called Kiku. Besides the version with a fixed blade, the catalogue boasts many models such as that with 4.6’’ blade and another pocketsize one with 3.5’’ blade.

Furthermore, the knives comes with a satin finish stainless steel or black titanium nitrid, which keeps the knife’s steel from getting rusty.

The grip is made of matt green micarta. This material, created by soaking linen in resin and then pressing and drying it, is very light, compact and crushproof, and completely resistant to everyday use and weather conditions. 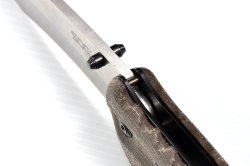 Bruno Ardovini
Ambidextrous thumb studs allow a fast opening of the knife, using one hand only

We examined two models, one with satin finish blade and also the black version called TiNi, with a 4.6’’ blade (11.68 cm).

The Kiku folding knife has a hollow grind blade, which, merging to its front edge, forms a classical  Tanto point .

This interesting blade gets much larger at the end, compared to its first third. What is the most interesting feature of this knife, produced in industrial quantities, is the variety of the surfaces created on the blade sides.

The steel used to create it is the Japanese AUS-8, with high levels of chrome, characterized by extreme rigidity yet it is easy to sharpen. It is also important to notice that the SOG blades are treated by a special cryogenic hardening, which lowers the blade steel to -300 F (- 184°C) before bringing it back to the room temperature. This process modifies the atomic structure of the steel, increasing its tenacity, resistance and edge retention. 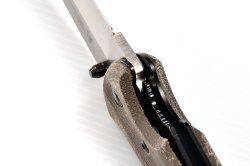 Bruno Ardovini
The checkered liner of Kiku is easily reachable with your thumb, which allows you to close the knife easily

The pommell of the grip also supports the lanyard hole. 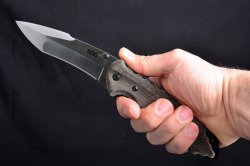 Bruno Ardovini
Kiku’s great dimensions with 4.6’’ (almost 12 cm) blade. Notice the lower indent of the grip, which is perfectly aligned with the index finger

The knife can easily be opened with one hand thanks to the bilateral latches on the blade. It is blocked by a liner lock on the grip that goes against the tang of the blade, making sure it doesn’t close accidentally.

The lateral indent on the front side of the grips helps you reach the thumb stud. In any case, the weight of the blade allows you to quickly open the knife, moving your wrist in a swift and decisive motion, once your training allowed you to apply this move. 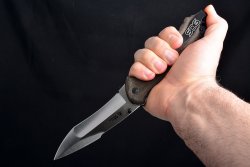 Kiku comes in an elegant box in which you can find a second reversible clip so that you can carry it as you wish. SOG Kiku is a high quality tactical knife. Its size and materials make it an excellent defense knife but it can also, and above all, be used as a great outdoor tool..

Grip size allows a great use of folding Kuki for various tasks, while its blade 12 cm long and 4 mm wide, fits self defense needs, since you can carry it in many ways. Of course, we hope you will use it for safer tasks and collection purposes. 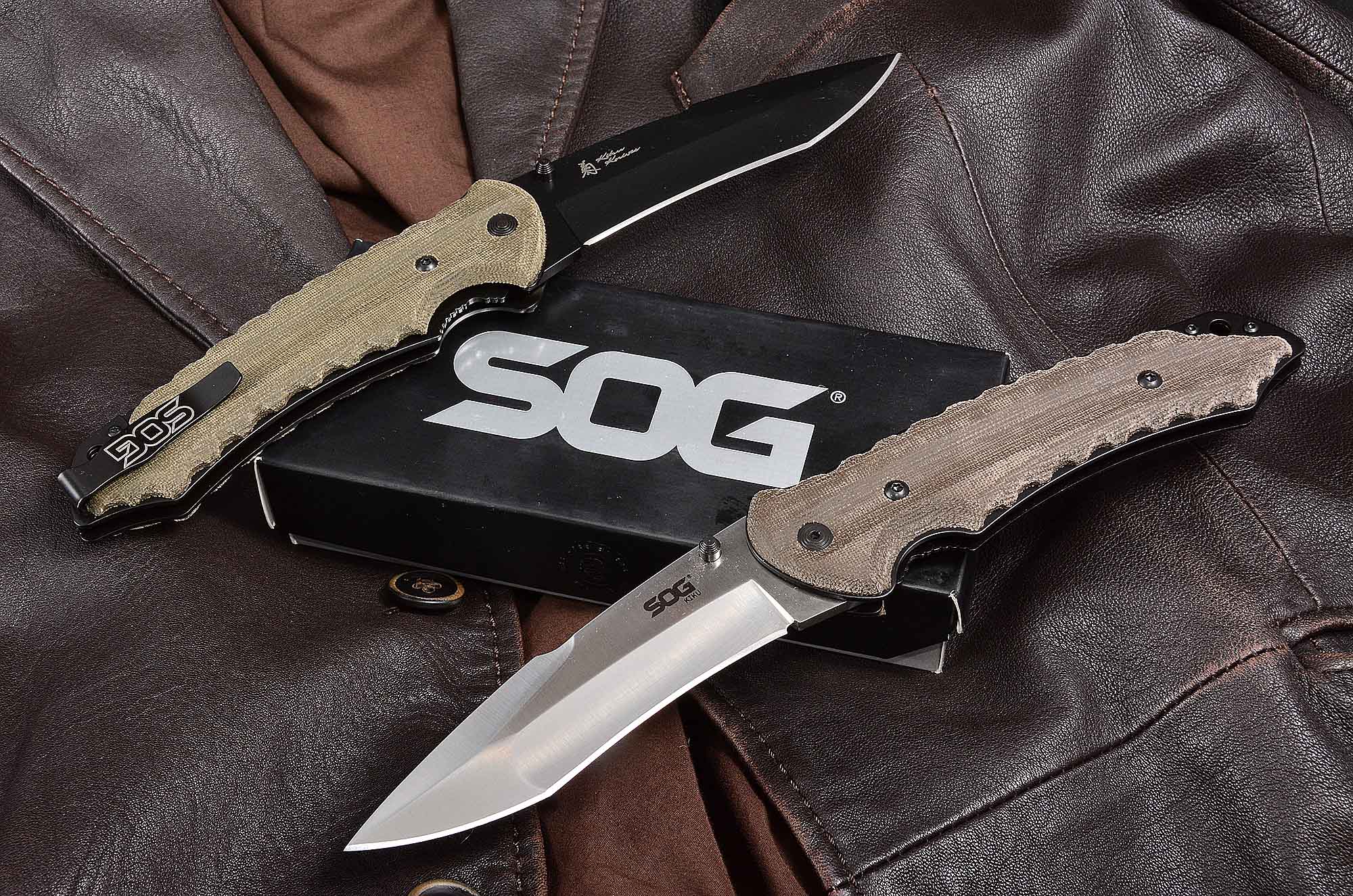 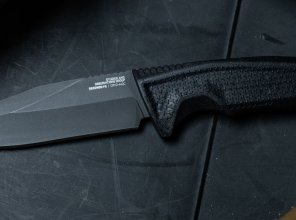 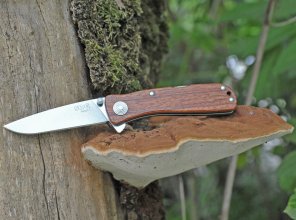 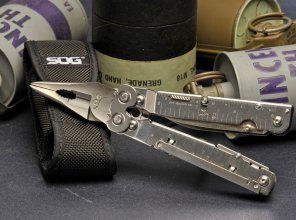 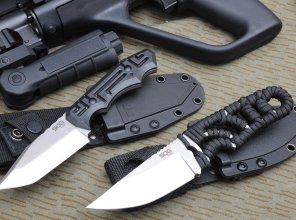 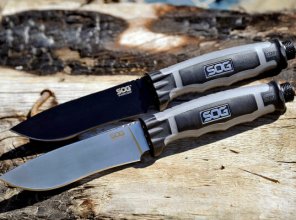 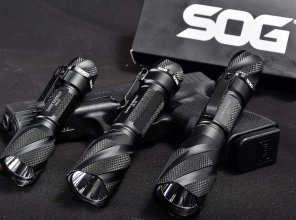