When you see the Davide Pedersoli brand associated with the most famous revolvers in the history of the West, you’ll immediately think of their muzzle-loading replicas. But the Italian company based in Gardone V.T. has also been developing a range of interesting breech-loading models for “western” cowboy action shooting.

In particular, there’s what we might call a “trilogy”, composed of a pistol, a rifle and a smooth bore shotgun. These guns all have three features in common.

First and foremost, they definitely have a distinct cultural identity. Despite the fact they’re designed and built in Italy, they are without a doubt inspired by late 19th-century American firearms.

Secondly, these aren’t exactly replicas: the three products, from an aesthetic point of view hail to “western” guns, but in terms of the choice of materials, design and production process, these are definitely modern firearms.

This choice, which we could say is mandatory, improves the functional performance of the guns (the original Colt 1877 didn’t exactly make a name for itself in terms of reliability) and above all makes these guns much safer to handle and use.

Let’s consider, for example, the changes made to the Lightning's action, which we had the pleasure to test in the past, or the radical changes made to the revolver, the internal mechanism of which hails to the 1873 single-action model rather than that originally used by Colt.

The third and last characteristic element is the use these guns are intended for, but in this case there are some surprises in store: the rifle and the shotgun are used very effectively in the US for hunting and the “side-by-side” in particular inspired the production of “Bohemian” shotguns, for waterfowl hunters specialised in hunting ducks and geese in marshland. 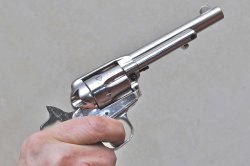 The Doc Holliday revolver is a faithful reproduction of the Colt 1877 Lightning.

The Doc Holliday .38 Special revolver is based on the American Colt 1877, which became an American icon after it was used by Doc Holliday with the Earp brothers in the famous Gunfight at the O.K. Corral, considered by many to be the most epic gunfight in the West. The famous gunfighter Doc Holliday did actually use a nickel-plated Colt Lightning in the gunfight with the Clanton brothers.

The original revolver was considered quite compact at the time due to its size, and had a repeater double-action mechanism, which was extremely complex and delicate, also in consideration of the fact that the ammunition it was chambered for (.38 Colt) was loaded with black powder as its propellant, which left a large amount of carbon deposits that could seriously compromise the function of the delicate mechanism.

The blued version of the Doc Holliday revolver. 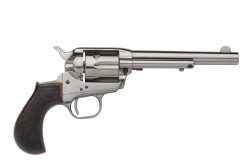 The nickel-plated version of the Doc Holliday revolver.

At the time it was quite a ground-breaking design, but it also suffered from reliability issues.

So how can you offer such a gun to the modern public? It’s simple: by keeping the outer appearance of the gun as faithful as possible to the original while making some drastic changes to the internal mechanism.

In this case, the suitably modernised single-action repeater system used on the Colt 1873 was chosen.

The result is a compact gun that is ideal for people with a more slender build. Taking ammo that won’t break the bank, it offers good performance in ballistic terms and is also safe to use. 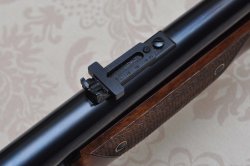 The rear ramp sight on the Pedersoli Lightning rifle. 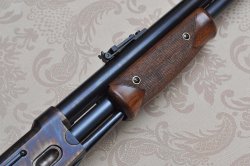 The forend slides along the magazine to pump the next round into the chamber.

The “Lightning” rifle, available in .357 Mag, .44/40 and .45 LC calibers, is based on the same gun produced by the American manufacturer Colt during the last century. In general, it’s quite a compact manual pump action repeater gun with a tubular magazine feeding system.

As well as being fast, as the name suggests, it’s also a very accurate and enjoyable “little” gun to use, as we found out when we tested it.

The finish is of the highest quality as is obvious on the blued barrel and magazine, the receiver with its ejection port at the top, the tortoiseshell finished surfaces and European walnut, made from select seasoned blocks skilfully chequered and polished.

It’s an excellent gun with a fine finish, well balanced in terms of both size and style. 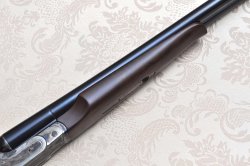 The “Schnabel” forend on the Pedersoli Wyatt Earp shotgun. 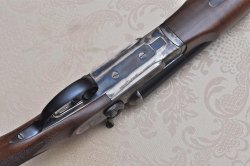 The Wyatt Earp shotgun has a tortoiseshell finish action.

As soon as it made its first appearance on the firing ranges it amazed shooters, as it’s unquestionably well-built and very easy-to-use thanks to its ergonomic qualities, compact dimensions and carefully well-balanced weight.

This precision makes it an excellent choice for certain types of hunting and this has broadened its commercial scope beyond the manufacturer’s expectations.

If we had to define this range of guns, we can without a doubt say that Davide Pedersoli on the one hand has confirmed his name as a manufacturer of fine guns, while on the other, has used his imagination to offer world wide shooters three products that are well-made, skilfully and distinctively finished, and stand out from the crowd of other guns available on the market. 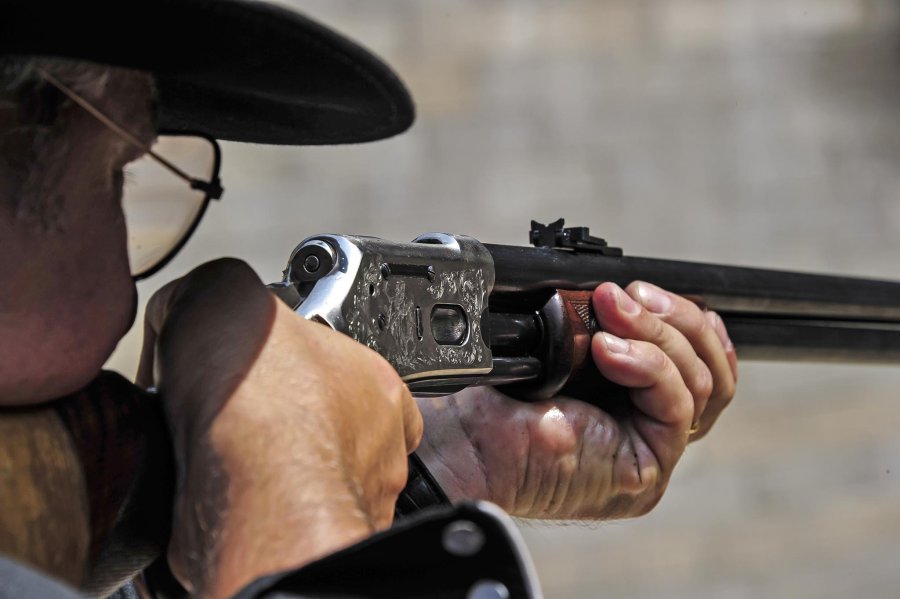 Subscribe to the Newsletter
This article is also available in this language:
DEIT
Click here for more information on the topics:
Pedersoli DavidePump ActionRevolverShotgunsSporting rifles
That might interest you too: