Traditionally, a firearm in the “bullpup” configuration is defined as a gun whose trigger and firing hand grip are located ahead of the breech area. This also means that the bolt, the magazine and other working parts are usually located inside or above the shoulder stock.

If compared with traditional layouts, this configuration offers obvious advantages in terms of overall lenght and balance; some of its disadvantages include a generally more awkward reloading and/or magazine insertion design, lack of user-friendliness for left-handed shooters (to say the least) and a firing chamber positioned very close to the shooter's face.

Bullpup designs became possible and feasible only after the introduction of metallic cartridges, which allowed ignition systems to be integrated within the action of the gun − a firing pin in the bolt, that is.

The earliest recorded bullpup rifle was patented in the United Kingdom around 1902 by Scotsman James Baird Thorneycroft; his intent was to come out with a compact-sized rifle which would, at the same time, retain the barrel lenght and thus the effective range of a conventionally-sized military rifle.

In order to achieve his goal, Thorneycroft moved the action and magazine all the way back and into the shoulder stock, and located the trigger in front of the magazine area. This called for a necessarily long transfer bar, which ran inside the stock and around the magazine.

The Thorneycroft rifle was tested in several variants by the British Army, but was rejected in favor of the traditionally-designed "Short-Magazine, Lee-Enfield" rifle, or SMLE.

More or less in the same timespan, another British inventor and Army officer − Major Philip Thomas Godsal − patented his own bullpup bolt-action rifle; despite numerous later improvements, it also ended up in a failure, with no military or civilian buyer interested.

Faucon's design sought to provide a semiautomatic rifle that would allow the shooter to maintain a lower profile and would require less effort to fire when walking or from standing or kneeling position; this was achieved, in Faucon's mind, by placing most of the gun’s weight onto the shooter's shoulder rather requiring him to redistribute it on his hands and arms.

The shoulder stock was located on the lower portion of the gun, right in front of the magazine and the action, so that the rifle would balance itself on the shooter's shoulder; the trigger and the pistol grip were located further forward. A rather advanced weapon − well ahead of its times, like many other − the Faucon rifle was basically just a redesigned Meunier rifle, reconfigured in a still today quite unique bullpup layout.

World War I − optimistically dubbed "the war to end all wars" back then − spurred the development of automatic firearms that would be particularly suited for mobile warfare. As early as in 1918, at least two interesting bullpup firearm designs were patented in the United States.

The first one spawned from the fairly conventional, well-known Lewis machine gun. John Rison Fordyce − a Major in the U.S. Army Corps of Engineers − pursued the same concept as Armand-Frédéric Faucon, trying to make a "light" machinegun (which wasn't in fact that light at all!) more convenient to fire from standing positions or when moving. 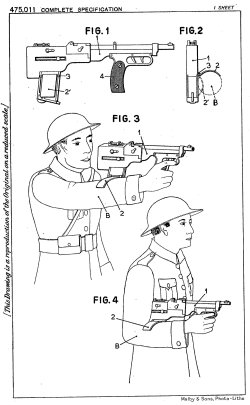 Submitted by Maxim Popenker (personal archives)
In 1937, Frenchman Henri Delacre was awarded a patent for a bullpup sub-machine gun

The simplest way to achieve this goal was to locate the overall weight of the gun over the shooter's shoulder, by adding two grips and a front trigger below the barrel. Next step was to get rid of the wooden stock to reduce the overall lenght and weight of the gun, replacing it with a shoulder loop that would support the gun in its "battle-ready" positon. The final, most elaborate design modification consisted in a special conveyor-type feeding systems that held the ammunition perpendicularly to the barrel and rotated them before loading: a feeding system that pre-dated the strikingly similar Belgian FN P90 by more than 60 years.

To achieve better balance, the gun was to be carried under the armpit, held in balance by the loop, placed around the shooter's shoulder; pistol grip and trigger were to be located well at the front. It's not known if Fordyce's final design bullpup machinegun was ever manufactured, even as a prototype, but it could have been quite feasible as it required nothing more than a simple improvised conversion of existing Lewis machineguns.

The second bullpup to be invented in the United States in the year 1918 was patented by H.L. Welsh; it would have had the appearance of  a stretched semiautomatic pistol, whose magazine would be located in a hump behind the grip. Once again, the goal was to achieve better recoil control, by transferring most of it from the wrist to the bicep, and by putting most of the weight of the gun itself from the palm and wrist area to the stronger forearm part of the hand. According to the patent, this would provide better accuracy and faster follow-up shots. Once again, it's not know whether or not a prototype was ever built − but the concept sure lived on. 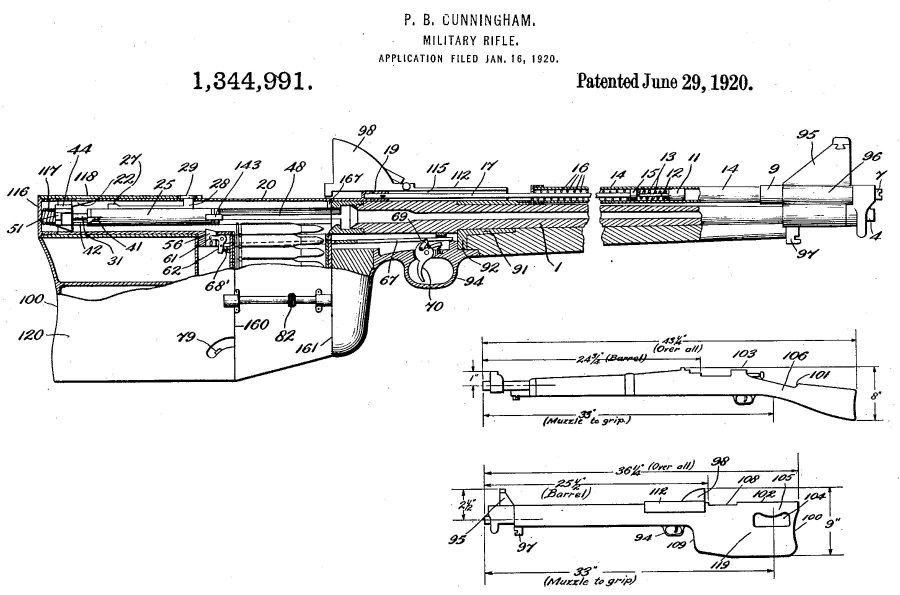 Submitted by Maxim Popenker (personal archives)
A diagram showing the layout of the “military rifle” designed in 1920 by U.S. Army Sergeant Paul B. Cunningham

Americans seemed quite fascinated with bullpups at the time: in 1920 another American soldier − Army sergeant Paul B. Cunningham − received a patent for what he just called a “military rifle”.
His design was indeed quite advanced for its time: a gas operated, rotating-bolt semiautomatic rifle offering large capacity magazine (20 rounds, according to the patent). Most important to us is that Cunningham’s rifle was a bullpup design, whose magazine was located inside the unusual stock, with a large horizontal loop on the rear portion − apparently conceived to provide a solid gripping point when the rifle was used for bayonet charges and thrusts.

His design seemed to be a direct descendant of the above-mentioned American Welsh bullpup pistol: in pursuit of same goals (better accuracy when firing with one hand), Delacre proposed a compact weapon which, judging from the patent drawings, was meant to look like a compact submachine gun with a double trigger system.

Once again it's not known if the Delacre gun was ever built but this particular patent became well-known and was mentioned in more than one later invention of the same nature.

By late 1930s, the "bullpup bug" infected another nation: Czechoslovakian designers worked on a variety of anti-tank rifles, whose calibers ranged between 7,9mm and 15mm.

Several prototypes were built starting around 1938, and this work resulted in development of the first bullpup weapon to be actually adopted by any military force in the world: the Panzerbüchse M.SS.41, a manually operated bullpup anti-tank rifle chambered for the powerful German 7,92x94mm caliber. Manufactured at Zbrojovka Brno for the Waffen-SS forces during the German occupation of Czechoslovakia, the M.SS.41 was based on pre-war experimental designs such as the 7.92x145mm caliber ZK-382, engineered by Václav and Emmanuel Holek.

The PzB M.SS.41 was hardly a successful weapon, because already in 1941 the high-velocity 7,92x94mm round was vastly inadequate to defeat Allied tanks;  this doesn't write off its historical significance, as the M.SS.41 was first bullpup ever to be officially used on the battlefield.

As World War II rolled across Europe, people ran away in masses from the Nazi armies that occupied their home Countries. As a result, many experienced gun designers ended up across the Channel, in the United Kingdom. It's not known if the responsibility for reintroducing the idea of bullpup designs in Britain is to be solely bestown to those Continental designers, but several interesting bullpup designs appeared in UK during the war.

The most known of them all was probably the 7,92mm EM-1 automatic rifle, developed by Polish refugee Roman Korsak. By the mechanical point of view, Korsak's EM-1 was vastly reminiscent of the German FG-42 "paratrooper's rifle" and its 7,92x57mm Mauser caliber, although the EM-1 was revolutionary in its layout and featured a quick-detach barrel design. At least one specimen of the Korsak automatic rifle survives to this day in the United Kingdom.

In 1945, some United States Army Ordnance officers stationed in the Philippines prototyped and hand assembled a bullpup battle rifle known as the "Model 45A": feeding through Browning BAR detachable magazines and featuring a carrying handle with an integrated scope, it was far ahead of its times in concept and rather crudely assembled in practice, and failed to appeal the U.S. military.

Two even less known designs were conceived in Britain towards the end of World War II, in an attempt to create a compact and quick-repeating sniper rifle. One design, known as SREM-1 (Sniper Rifle, Experimental Model 1), was a manually operated design, whose action cycled through a movable pistol grip. Another one, known as the "Hall rifle", was a gas-operated semiautomatic platform which, as it appears, was one of the first to address one most important deficiency of most bullpup designs – ejection.

Due to the close proximity of the chamber to the shooter’s face, conventional top ejection or side ejection makes left-hand shooting either impossible or very uncomfortable. The Hall design addressed this issue through a rearwards-ejection system: the ejection port was located above the shooter's shoulder.

Neither the SREM-1 nor the Hall rifle went beyond prototype stage, and it took British industry several post-war years to produce a "worthy" bullpup military rifle. But this is a story that will be told in one of the next articles.

Submitted by Maxim Popenker (personal archives)
Stay tuned on all4shooters.com for part 2: "Before they were mainstream". Coming soon

Bullpup assault weapons evolution: from the 1970s to our days

Subscribe to the Newsletter
This article is also available in this language:
DEIT
Click here for more information on the topics:
TechnicsAssault riflesBolt-action riflesBullpupHistorical FirearmsMilitary firearms
That might interest you too: