Bullpup assault weapons evolution: from the 1970s to our days

In the third and final installment of our series of articles, we take a look at the latest years of development of bullpup assault weapons

The “new age of bullpup rifles” began in late 1970s, as two major European militaries officially adopted new 5,56x45mm NATO caliber assault rifles in a bullpup configuration: those were the Steyr AUG – adopted by the Austrian Heer as the “StG.77” – and the French FAMAS F1 assault rifle, manufactured by the State-owned GIAT group.

The key reason for their adoption was the conception of modern infantry as a mechanized force that would reach the battlefield on armored personnel vehicles or helicopters; this factor put a premium significance on compact size when it came to infantry rifles, and thus turned the bullpup configuration into the most logic solution to achieve shorter service weapons without sacrificing ballistic performance.

The British military followed suit in the 1980s, with the adoption of a highly controversial small arms system known as the SA-80, consisting of the L85 assault rifle and the L86 light support weapon, both chambered for the NATO standard 5,56mm caliber.

The German Armed Forces – which at the time were for some reason trying desperately not to adopt the new NATO standard round – attempted to “jump ahead” of everyone (and of their own times!) by testing the G11, a futuristic assault rifle in bullpup configuration developed by Heckler & Koch and chambered to fire a 4.73x33mm caseless round. The extremely complicated G11 faced several technical and political problems before going belly up as the German Army had to reorganize in face of the dissolution of the Warsaw Pact and the end of the Cold War in 1991.

In recent years, several other Countries attempted to develop 5,56mm-calibre bullpup infantry rifles – these including Belgium, Croatia, Israel, the people's Republic of China, and Singapore.

Of those, the Israeli “Tavor” TAR-21 family of rifles and carbines is by far the one that achieved the highest success on the international market, having been successfully sold on the professional and commercial markets worldwide to several Countries other than “just” Israel (where it has been adopted by the IDF).

In terms of sheer manufacturing numbers, however, the Chinese Norinco QBZ-95, or simply “Type 95”, will be hard to beat: adopted by the People's Liberation Army in an assault rifle, a carbine, a designated marksman rifle and a light support weapon variants – all based on a common bullpup design – it has evolved in at least two different generations so far.

An export version of the weapon system, dubbed the QBZ-97 or “Type 97” and chambered for the 5,56x45mm NATO caliber, has been sold to several Countries in the south-East Asian sub-continent, and on civilian markets in a semi-automatic form. Last, but not least, in contemporary Russia, the unique ADS (“Dual Medium Amphibious”) bullpup assault rifle is being distributed in limited numbers to Naval Special Forces.

An interesting aspect of the evolution of the bullpup design is that, around the late 20th Century, it initiated some sort of “popularity rehearsal” of sub-machine guns, a type of firearms whose popularity between military and law enforcement units had been steadily declining for well over a decade by then, in favor of compact-sized assault carbines.

The forerunner of the “bullpup sub-machine guns” generation was the Steyr AUG "Para" − a blowback-operated, short barrel 9x19mm caliber conversion of the above-mentioned Austrian bullpup assault rifle − and the first commercially successful one was the unorthodox Belgian FN P90, while the Chinese “Type 05” is the latest entry in the family.

Despite the noticeable differences (the P90 is a downwards-ejecting, closed-bolt firearm whose peculiar magazine is mounted on top of the polymer chassis, while the Type 05 sports a conventional magazine design and placement and is an open-bolt blowback-operated design) the two models share certain similarities, first of all the use of high-capacity magazines (50 rounds for both) and of proprietary high-velocity, small-caliber ammunition – respectively the 5,7x28mm-FN for the P90 and the 5,8x21mm DAP-92 and DCV-05 for the Chinese Type 05, although a more standard, 30-rounds 9x19mm caliber of this last design also exists, dubbed the “JS9” or the “CS/LS2”. It is safe to assume that the Chinese 5,8x21mm could be directly inspired by its Belgian counterpart. 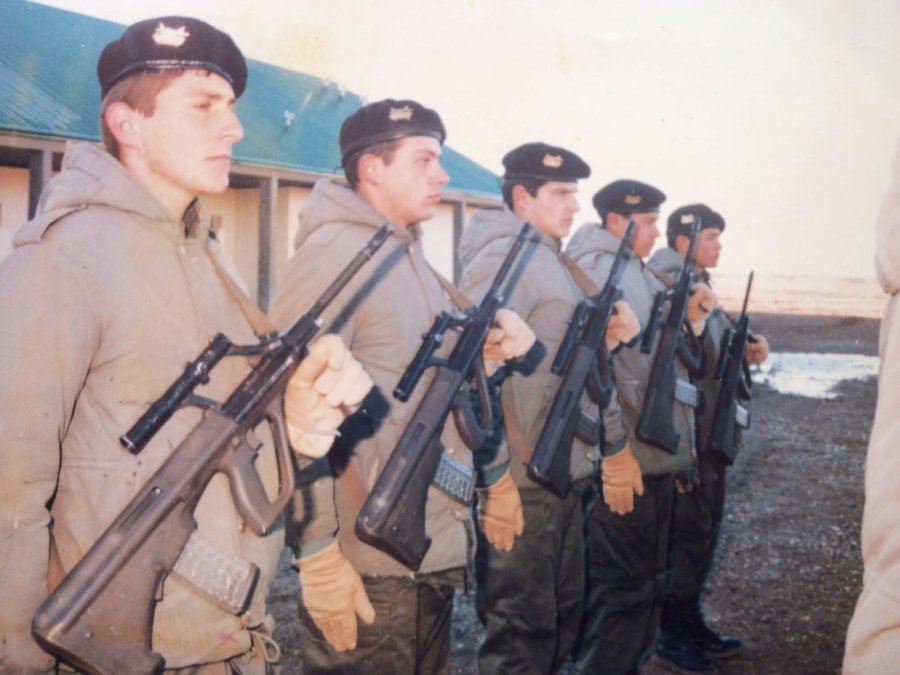 Submitted by Maxim Popenker (personal archives)
It's safe to state that, of all the models in the first wave of mass-produced bullpup service rifles of the late 1970s and the early-to-mid 1980s, only the Steyr AUG was a true success 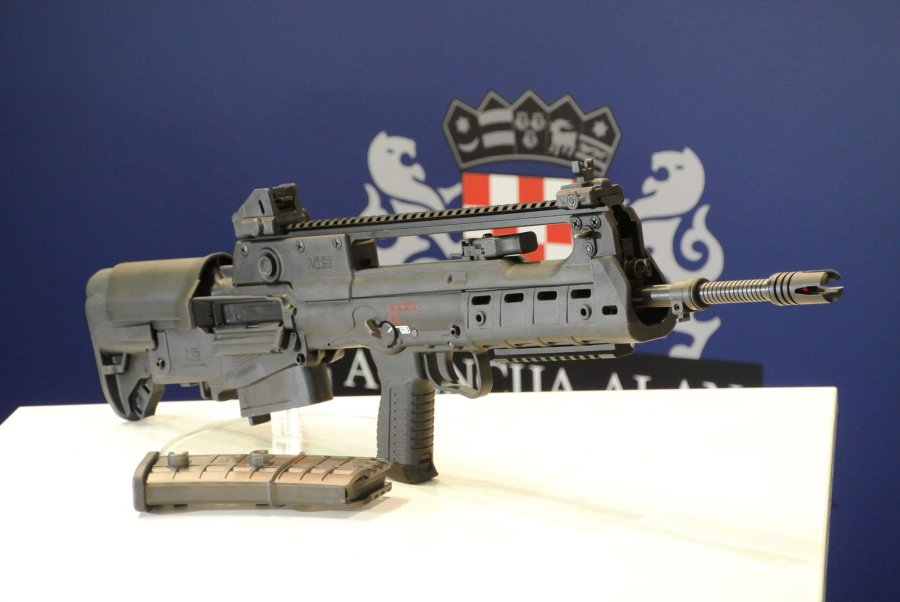 Bruno Circi
Between outstanding achievements and abysmal failures, the period ranging between the last two decades of the 20th Century and the first two decades of the 21st Century was marked by a high level of interest for the development of bullpup infantry weapons; hereby portrayed is a 5,56x45mm caliber VHS-2 assault rifle as showcased in the year 2014 by its manufacturer, the HS Produkt D.O.O. company out of Karlovac (Croatia)

All the above-mentioned weapon systems were designed from the ground up, with little – if any – influences taken from previously existing design. This included a more or less proper or user-friendly placement of firing controls, adequate balance, and, most important, special care for left-hand shooters.

Some of the most successful bullpup rifles (most notably the Steyr AUG, the French FAMAS the IWI “Tavor” system) have technical provisions that allow their conversion from right-side to left-side ejection – usually through partial disassembly and the replacement of some components – in order to suit the needs of left-handed shooters. Although this solution may actually work in some situations, it is hardly considered “practical” to do right on the battlefield; that's why several manufacturers have so far tried to solve the problem of non-ambidextrous ejection in bullpup firearms in a more radical way, that is, by implementing some unique ejection system.

The above-mentioned FN P90 sub-machine gun was the first mass-produced bullpup firearm to feature a truly ambidextrous ejection system, as spent cases fall straight down through a chute located behind the pistol grip; this was made possible by the unorthodox placement of the magazine, which on the P90 sub-machine gun is notoriously located above the barrel, with a rotary feeding system aligning the rounds to the chamber one by one – otherwise they're placed perpendicularly to the bore axis to save space and provide a higher capacity.

Such a solution would be unpractical with 5,56x45mm NATO or any other modern standard military rifle ammunition, and that's why all modern bullpup rifles still feature a bottom-feeding system.

As a matter of fact, there are only two modern bullpup rifle designs that offer a 100% ambidextrous ejection system, and those are the Belgian FN F2000 and the Russian KBP designed A91M and ADS rifle; both sport a forward ejection system – and so far, both layouts enjoyed an extremely limited market success. Of the two, the Russian system appears to be more reliable, as the ejection chute is noticeably short and each case is literally pushed forward by a protruding component of the bolt carrier, providing a quite violent ejection with cases flying out of the gun above the pistol grip.

The Belgian rifle features an ejection tube instead, located inside the chassis and side-by-side with the barrel, and cases have to travel through it before falling down from an ejection port located over the forend.

Since every case is pushed forward by the following one and there is no additional force driving them down the chute, the FN F2000 may be prone to jammings in certain situations, particularly when firing upwards. It must be noted, however, that the forward ejection concept – although rarely encountered in rifles – is in fact a very old idea, first used on Maxim machine guns designed in the late 19th Century.

Bullpup configuration also found some appreciation among designers working on weapon systems whose barrel length is an important feature – namely sniper rifles, long-range rifles, anti-matériel rifles and interdiction rifles, whose barrel can arrive up to a meter in lenght. As of today there is a plethora of bullpup long-range rifles and anti-matériel rifles available on the military markets; these include the U.S.-manufactured, 12,7x99mm/.50-BMG caliber Barrett M90 and M95 models, the Leader-50A1 and the Desert-Tech HTI; the 12,7x108mm Russian-made ASVK; the Chinese M06 and LR2, available in both calibers; the Hungarian GM-6 “Lynx” and the Polish WKW “Wilk”, chambered in .50-BMG; and a handful of others, some of which are still in prototype phase, such as the Barrett XM500. 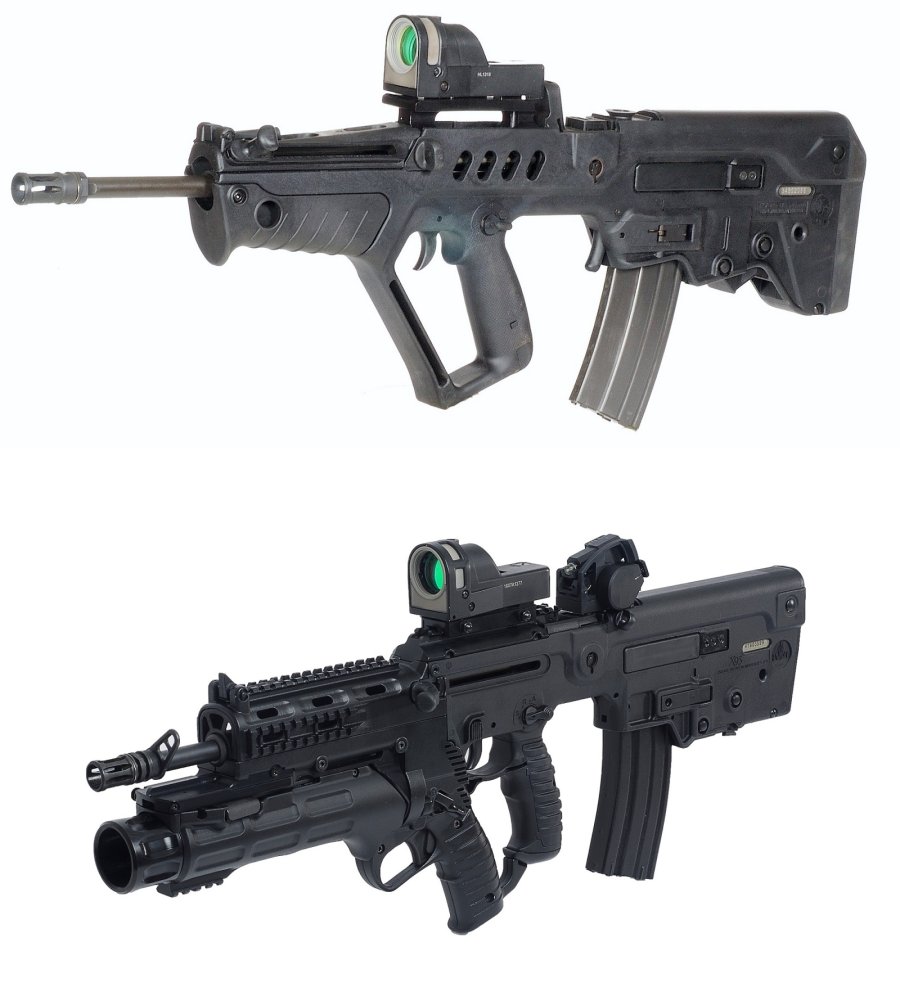 IWI - Israel Weapon Industries, Ltd.
Of all the most recent bullpup assault rifles, the Israeli TAR-21/X95 "Tavor" weapon system is by far the most successful on a technical and commercial standpoint alike 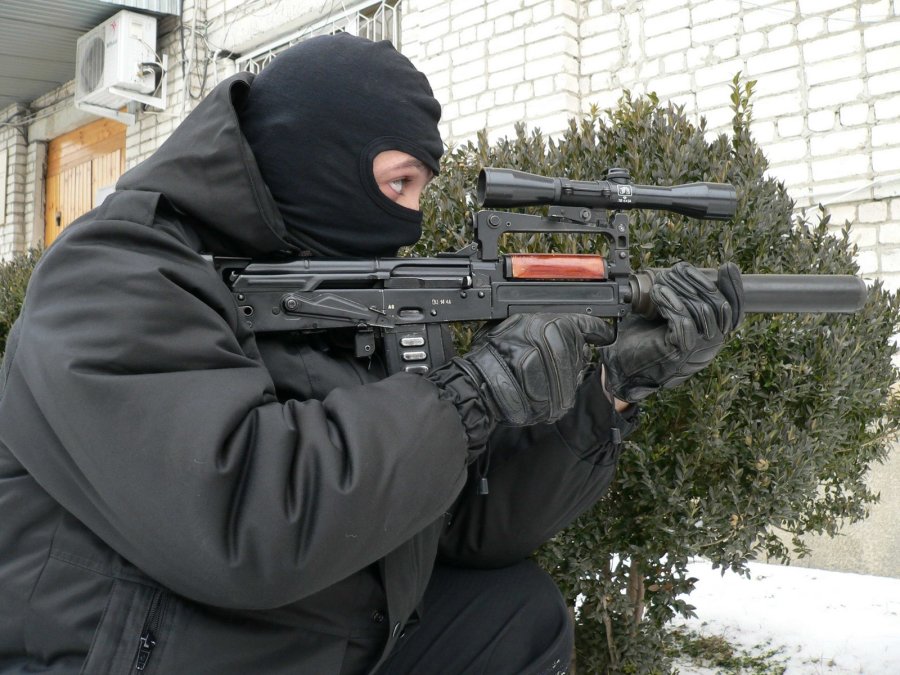 From the 1960s onwards, actually, some attempts were made to develop and manufacture bullpup-configured firearms through the conversion of standard or conventionally-configured models; most of these attempts were meet coldly on the market, and achieved but a limited success. These include the High Standard Model 10 series of semi-automatic bullpup shotguns, used by some local Police departments in the U.S. and sold in very limited quantities the Argentinean Navy and to the Mexican Army; more recently – in the post-Cold War era – the Russian arms industry developed the Ots14 “Groza” assault rifle system and the SVU-A sniper rifle, currently in limited use with Russian law enforcement agencies.

The bulk of bullpup conversion systems for conventional firearms was however aimed to the commercial and civilian markets – most notable are the Muzzelite bullpup conversion system for the popular Ruger Mini-14 semi-automatic rifle and the AKU-94 conversion kit for AK-based rifles – and sales were always unimpressive, mostly due to the lack of user-friendliness towards left-handed shooters. Hence why some companies tried to implement fully ambidextrous controls and ejection systems on several commercial-grade bullpup firearms.

So far, the Florida-based Kel-Tec CNC Industries company has been the only one to meet a considerable degree of success in such an endeavor, by launching two ambidextrous semi-automatic bullpup rifles: the 7,62x51mm/.308 caliber RFB model, which features a forward ejection system through a chute and out of a window located over the handguard; and the .223/5,56mm, 6.5mm and 7,62x39mm RDB and M43 rifles, which feature a free-fall, downwards-ejection window located right behind the magazine housing.

The same company manufactures one of the very few commercially available bullpup shotguns, the KSG, also offering an downwards-ejection system; its only rival on the market is the Turkish-made UTAS UTS-15 shotgun, featuring a conventional right-side ejection port, although both are based on the South-African bull-pup, downwards-ejecting Neostead NS-2000. All said shotguns feed through dual, alternate-feeding or selectable tubes, and all are offered as home defense or tactical firearms.

In more recent times, another American company – the above-mentioned Desert-Tech – introduced the MDR “Micro-Dynamic Rifle” bullpup weapon system, currently in final prototype stages; a multicaliber platform, conceived in a civilian-grade semi-automatic form and in a MIL/LE-oriented select-fire form, the Desert-Tech MDR can be switched instantly from a standard right-side ejection to a forward ejection pattern, which would put it in direct competition with both Kel-Tec designs, at least on the civilian markets.

To wrap it up, it appears that the bullpup configuration has firmly established itself as a mainstream design in modern small arms. Like any other configuration or system, it has its own pros and cons, proponents and opponents, but it is opinion of this author that its popularity will gradually increase with the time and evolution. 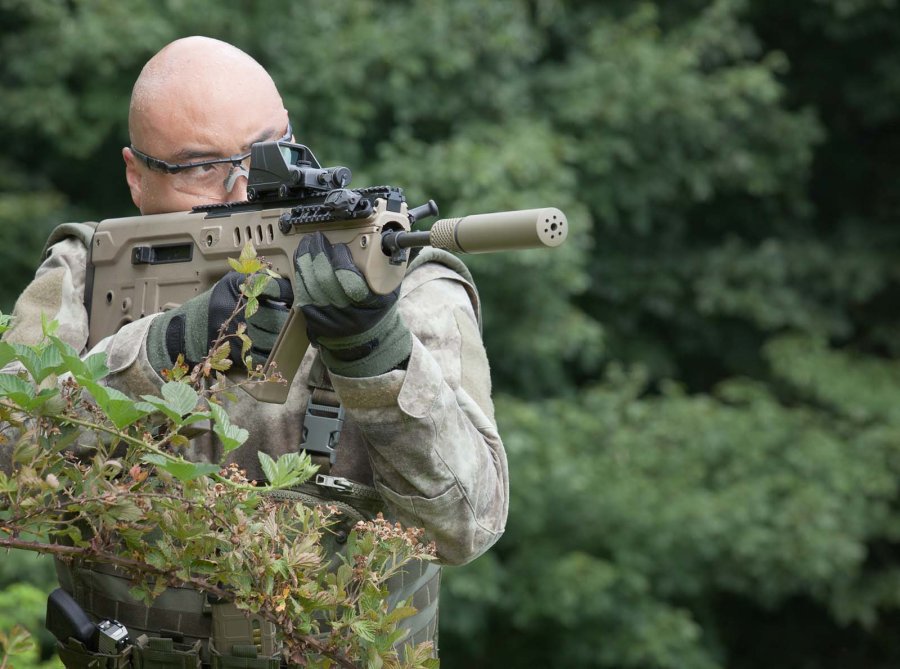 Photographer: Oleg Volk I see how this is -- you lik ephotos w
With a broadening number of enthusiast and a dwindling turnout of detractors, the bullpup design is now apparently well established as the mainstay tendence in the design of service weapon systems for modern times

Subscribe to the Newsletter
This article is also available in this language:
DEIT
Click here for more information on the topics:
TechnicsAssault riflesBlack RiflesBullpupHistorical FirearmsMilitary firearmsRiflesSemiautomatic rifles
That might interest you too: